What Fascinates You Most About the Apocalypse, Based on Your personality Type 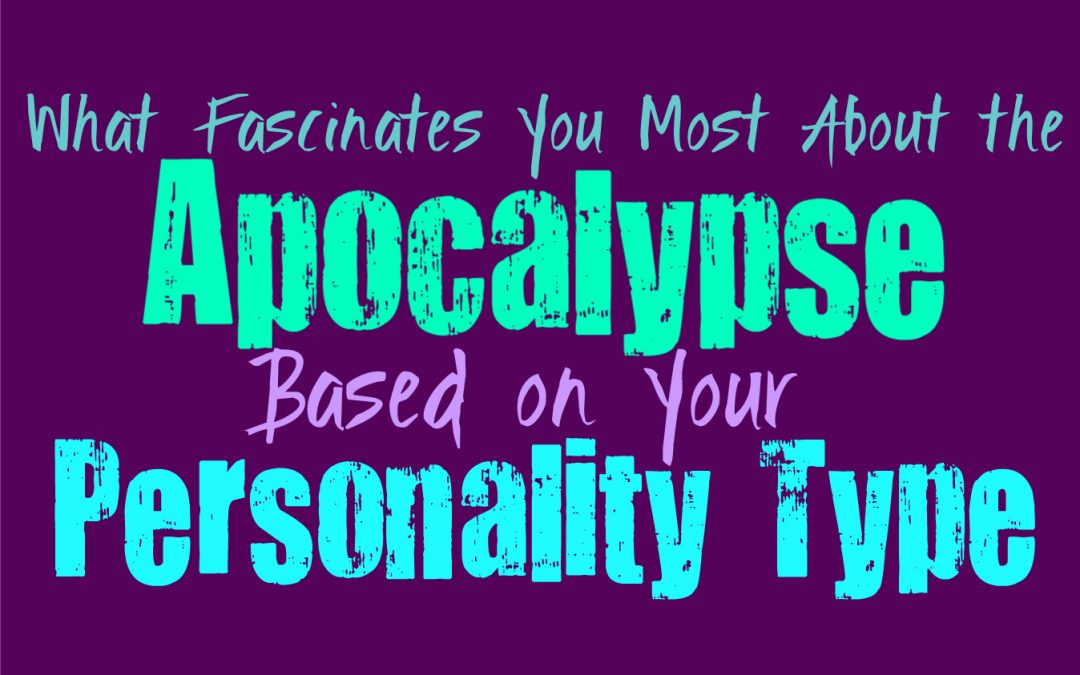 What Fascinates You Most About the Apocalypse, Based on Your personality Type

Let’s be honest, most people have a sincere fascination with a post-apocalyptic reality. One where or society has been torn apart by some sort of catastrophe (often zombies), and what is left is completely different than what we knew before. There are many reasons why this type of world can be so fascinating for people, but it is often different for each person. While in reality something like this would be sincerely difficult and horrible, there is a fantasy element which leaves us feeling differently in our minds. Here is how intrigued you most about a post-apocalyptic world, based on your personality type.

For the INFJ there are often many different aspects of a post-apocalyptic world which can be intriguing for them. They don’t usually find themselves enjoying the daily grind and the way society sets down rules for them, and this is something they often want to escape. In their minds the idea of society collapsing and having to start over, can feel like a fresh start and a new chance to make things better. The ideas of having everything change so quickly and giving everyone a chance to really start new, can feel a bit exciting and give the INFJ hope for something better in the end.

ENFJs are often intrigued by different aspects of a post-apocalyptic world, mostly the idea of starting fresh. Having the chance to remove societal pressures and live on their own terms, can feel intriguing for them. The ENFJ will likely be worried about their loved ones, but might envision that they could do what it takes to protect and provide for them. The appeal for this type of reality is that they can start fresh and have hope that together they could help build something better than the way life was before. ENFJs can become heavily weighed down by the pain and politics of the world, and so this idea of some sort of apocalypse forcing a restart, can be appealing.

INFPs are often fascinated by many different aspects of a post-apocalyptic reality, and might be truly drawn to this idea. INFPs often dislike the way society has so many rules and expectations, and might even struggle with the way things can feel so painful and negative. Their feelings towards the direction of the world, can cause them to desire a complete restart. The idea of an apocalypse means that the rules of society crumble, and things become completely new. The chance to make changes and hopefully start building things for the better, can give them a sense of hope for what is to come.

ENFPs are curious people who often enjoy the idea of change, and so some sort apocalyptic world can have a drawing because of that. The idea of starting fresh and having everything be completely different, can really intrigue the ENFP. For them this new world without the same rules and restrictions, is something that they might fantasize about. Their abilities to adapt to new situations is something that makes the ENFP more interested in major changes, ones that would scare or unnerve most people. There is something about the intensity and the lack of rules which definitely causes the ENFP to be intrigued by this.

INTJs might be drawn to the rawness and the challenge of a post-apocalyptic world. They also might find themselves curious to see how the world will function, and how they will need to adapt to this situation. They are good at figuring out how to operate efficiently and so taking on this challenge might be something that interests them in some ways. INTJs don’t necessarily find the lack of rules appealing, since they recognize that there will be an entirely new set of rules they need to understand and find out how to follow accordingly. For INTJs the most appealing thing is learning about this new and challenging way of operating in the world.

ENTJs might not fear the idea of a post-apocalyptic world, but that doesn’t mean they are as drawn to it as some people. They are strong-willed people who often believe they would be able to adapt and take charge when need be. The ability to set themselves as a leader in this situation, would likely be the most appealing thing for them. ENTJs enjoy being able to take charge and take on the challenge of figuring out how to be more efficient and in control in this type of new world.

INTPs often imagine the possibilities of things falling apart and society crumbling into something completely different. They are curious people who often consider the many different possible outcomes of any given situation. There are so many different aspects to this type of world which leaves the INTP feelings curious and drawn to it. They can imagine different ways in which they would need to adapt, and might even want to prepare themselves for it ahead of time. The chance to live in a world without the same society pressures, and sometimes altogether different to start fresh with, can be truly appealing for the INTP.

ENTPs are curious people who often enjoy major changes in order to really shake things up. For them there are so many different things which cause them to feel drawn to the fantasy of a post-apocalyptic world. For them it is about seeing this new world and learning how to navigate it without the same rules that societal had placed them under. ENTPs often envision this as being a world without rules and restrictions, giving them a chance to really live on their own terms and in their own way.

ISTJs are not often at odds with society and the way things run, they might even enjoy it. They are good at following rules and finding out how to constantly be the best at what they do. The idea of such a massive change isn’t usually something they find themselves drawn towards. They usually approach this thought from a logical and practical point of view, and so most ISTJs won’t find themselves all that fascinated by a post-apocalyptic world. For them it can feel messy and chaotic, but at the same time the most appealing thing would be the chance to live off the grid with less people.

For the ESTJ the most appealing thing about a post-apocalyptic world, would likely be the thought of living off the grid. The change to live with just a few special people and protect what they have together. ESTJs also enjoy the opportunity to use their leadership skills and really be the one to take charge of the situation. They aren’t afraid of a challenge and will simply do their best to adapt to these new rules of life and provide for their loved ones. ESTJs might enjoy the simplicity of it more than anything else, since in their minds it doesn’t feel that farfetched.

For the ISFJ the idea of a post-apocalyptic world isn’t often that appealing. They enjoy things that are comfortable and are drawn to what they know, so this type of major change is often rather unappealing. Anything that might risk the well-being of the people they love can be something that frightens the ISFJ a lot. They want to be able to provide for their loved ones and truly want to be able to make them happy. The only big appeal for the ISFJ would be that this world would give them a chance to connect and draw closer to their loved ones.

ESFJs are often more drawn to things they know and understand, and don’t really like major changes. For them there can be a lot of fear attached to the idea of a post-apocalyptic world, since this means the well-being of their loved ones won’t be quite as secure. ESFJs strive to be able to protect and care for the people in their lives, and they don’t like anything compromising this. The greatest appeal a post-apocalyptic world would be the simplicity of it, and the separation from societal pressures which can be overwhelming for them at times.

There is something appealing about the chaos and lack of rules which can draw the ISTP to the idea of a post-apocalyptic world. They enjoy taking risks and living their lives with a sense of thrill, and so this can be something that intrigues them about this new world. ISTPs might even analyze the possibility of this happening and how the different outcomes might take place. ISTPs are often drawn to the intensity and the lack of rules when it comes to this type of world.

ESTPs are likely drawn to a post-apocalyptic world because of its lack of rules and even lack of people. ESTPs can become drained by the expectations from others and being forced to tend to things the way people want. They prefer to live life on their own terms and so there might be something intriguing about a world where things are completely different and even a bit more chaotic.

ISFPs might be interested in the rawness and the chaotic side of a post-apocalyptic world. They enjoy being able to take risks and follow their own set of rules, so this can be a drawing towards a world where things are completely free and open to them. Most ISFPs might be unnerved by this idea since it feels a bit overwhelming and even frightening, but there is often a side of them which can be intrigued by the change and messiness.

ESFPs will likely be drawn to the chaos and change of a post-apocalyptic world, since they enjoy things that are a bit intense. ESFPs like taking risks and experiencing new things, and so having everything shake up in this way can feel like a chance to really see life from a new angle. They are adventurous people who enjoy living life without rules and being able to experience things on their own terms.