Do You Like Having Backup, Based on Your Personality Type 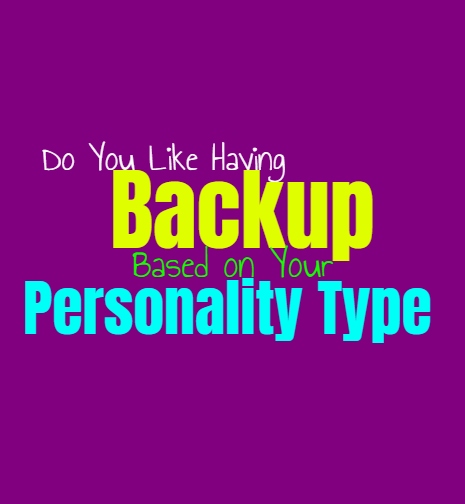 Do You Like Having Backup, Based on Your Personality Type

For some people it is important to have others backing them up, especially when they make major decisions in their lives. It is always rewarding to have people standing behind you, even when you are making mistakes, but for some this is more important than others. Here is how you feel about having backup, based on your personality type.

INFJs might not express or show this, but they definitely need backup in their lives. They question themselves often and can actually be rather hard on themselves. Without having a support system and people who are willing to backup them up no matter what, the INFJ might struggle to build this sense of inner confidence. Having someone who will stand by their side and show that they believe in the INFJ, helps them to connect with their strength and remove some of those negative thoughts they might have.

ENFJs definitely want to have backup and loyal people who will stand by them no matter what. While they seem like superheroes, capable of juggling anything and everything all alone, ENFJs really need people standing behind them. They need these people who will be there even when things are hard, since their loved ones are deeply important to the ENFJ. While they have a tendency to take care of most things themselves, that doesn’t mean they don’t want to have people who will back them up when they need it.

INFPs definitely enjoy having backup and people who support them even when they are struggling. For the INFP it is sometimes important to stand on their own, and be strong enough to really stand up for what they believe in. They want to feel like they can stand on their own and be strong without needing someone to come to their aid. At the same time, INFPs enjoy having someone who is willing to back them up, even if they are simply a silent support who is always standing by their side when things get tough.

ENFPs are independent people who want to feel like they can get things done themselves, and stand up for their own beliefs. While they often appear strong on the outside and might easily accept help, deep down they do want to have backup. For them it is more about having someone who will stand by their side, even if they fail or make mistakes. ENFPs want to feel loved and appreciated, but that doesn’t mean they need someone to jump to their defense with everything. They do like having some independence and want to feel like they can defend themselves.

INTJs don’t really need someone to back them up in order for them to move forward with something. They believe in standing on their own and being independent with everything they do. This doesn’t mean INTJs won’t welcome someone into their lives who is loyal and willing to stand behind them. They do want to have these types of connections, but they don’t need them in order to thrive and succeed. They are willing to wait for those people who will actually be loyal and be their backup, and so they need to be strong on their own while they wait for these people.

ENTJs believe in loyalty and so for them having people who will back them up, is important. They are willing to wait for these people though, and won’t simply halt their own lives because they haven’t found it yet. ENTJs stand strong on their own, and believe in moving forward even if they don’t have any backup. They still want this in their lives though, and for them it is truly rewarding to have loyal connections with people who will stand by their side no matter how difficult things might become.

INTPs often do a lot on their own without really focusing on having backup. They are independent people who don’t really enjoy asking others for help or guidance. At the same time, INTPs do thrive when they have people who are willing to support them without any ulterior motives. When they have people who stand behind them even if they fail, it helps the INTP feel more inspired to work towards the things they want without having a sense of guilt about it.

ENTPs definitely enjoy having a sense of independence in their lives, and don’t like people hovering. They want to feel like they can accomplish things without having to constantly turn to others for guidance. At the same time ENTPs enjoy having support and for them having people who will back them up no matter what, is truly rewarding. They might not admit to this inner desire, but ENTPs really do want to have people who love the unconditionally and will be their backup through everything.

ISTJs definitely want to have backup, but more in the sense that their loved ones support their choices and their actions. They are independent people who work hard to get things done and rarely ask others for help. For the ISTJ backup is more about having someone who is there for you and will be loyal to you no matter what. They want their relationships to be about trust and reliability, and so for them it is important to have those loved ones who will back them up when they are in need.

ESTJs definitely believe in having backup, as well as constant backup plans. They don’t like feeling as if they will fail at something and so they do whatever they must to ensure efficiency and effectiveness. For the ESTJ having backup means that they have people who stand behind them and help out if things become too challenging for one person. Most of the time they are more than capable of handling things on their own, but they are also willing to learn from others so that they can be truly successful.

ISFJs definitely believe in having backup and people in their lives who will help and support them. They do try to take on most things themselves, especially since they want to be there for their loved ones and never want to feel like a burden. This doesn’t mean ISFJs aren’t willing to accept the support, especially when they have people who back them up no matter what is going on. Having these people who are loyal and committed to them, makes the ISFJ feel comforted and happy.

ESFJ
ESFJs often appear to take everything onto their on shoulders, trying to take on the burdens around them. While they don’t want to put their needs onto anyone else, they do cherish having support. They enjoy having someone standing behind them and backing them up when they are struggling. For the ESFJ it is about having people who care enough to support them and back them up if someone else is making their lives harder.

ISTPs are independent people who believe in standing up for themselves and going after what they want. They don’t often look to others for backup, since they like to have the space and freedom to do things on their own terms. While they don’t really look for backup, that doesn’t mean they don’t appreciate their loved ones who support them. They still prefer to do most things on their own, since it makes them feel like they have space and freedom to live on their own terms.

ESTPs do enjoy having a sense of independence, and so they don’t always actively search for backup. They want to feel free to do things on their own terms without having to answer to others. ESTPs might try to seem strong-willed and independent, but that doesn’t mean they don’t also enjoy having backup. When the ESTP is being attacked or emotionally hurt by someone, they like having a loved ones who will stand in between and really back them up.

ISFP
ISFPs do care about having a sense of independence, but for them not having backup is a lonely feeling. They simply want to know that the people who they love are going to stand behind them and back them up throughout their lives. Having people who are willing to stand up for the ISFP when they are struggling and need it, makes them feel loved and truly comforted. For them it is about the connection and loyalty they share with these people, not about feeling like they need help.

ESFPs do want to have backup with just about everything they do, but the lack of it won’t prevent them from moving forward. ESFPs are strong-willed people who go after whatever they want in life, and don’t like letting anything stand in their way. They push forward and strive to acquire their dreams, even if they don’t have the support they deeply crave. ESFPs do feel happier when they have people who love them and back them up no matter what.