The Toxic Behavior You Are Most Prone To, Based on Your Personality Type 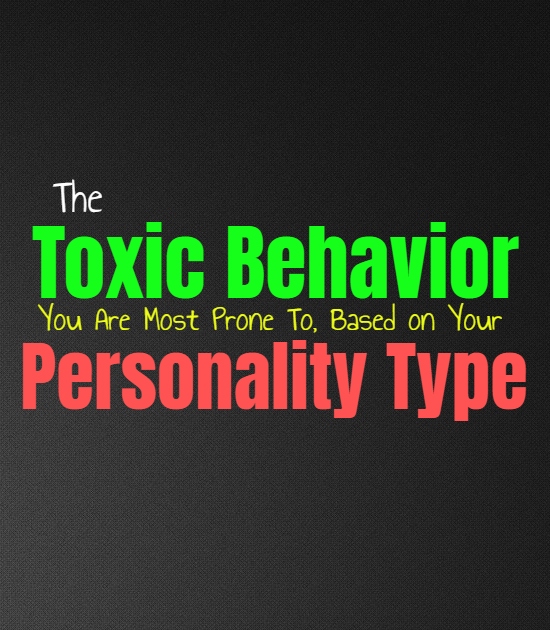 The Toxic Behavior You Are Most Prone To, Based on Your Personality Type

Toxic behavior is not something which can be attributed to type, but some might be more prone to certain negative behaviors than others. While the healthiness of a person depends solely on the individual and their ability to grow or change, we all have certain tendencies which can lean a certain way. Keep in mind this is not something these types always do, since it is more describing the people who possess toxic traits and which ones they are more likely to possess if they do. Here is what toxic behavior your personality type might be more prone to than others.

For INFJs one of the more toxic behaviors which an unhealthy INFJ might be more prone to, is manipulation. They are good at understanding the emotions of others and so they can often play into this awareness in a manipulative manner. The INFJ knows how to use guilt as a method of coercing people to behave a certain way, or to give them what they want. The toxic INFJ is very good at getting what they want from people, without them realizing what is even going on until it is far past the beyond of recovery.

ENFJs can be more prone to toxic perfectionism, since it prevents them from accepting any mistakes they have made. They have a hard time admitting to failures and instead will defend themselves in order to avoid being discovered. These ENFJs really don’t handle being criticised or having anyone behave as if they are not perfect. This is because they fear abandonment in these circumstances, and so they want to hide their flaws and struggle to really accept that they even exist.

INFPs can sometimes be prone to playing the victim role, as a means of avoiding conflict or discord. They don’t enjoy getting into arguments about most things, and don’t want to feel like someone is attacking them. So the more toxic behavior they might exhibit is behaving as if they are the victim in this situation, so that they can avoid feeling like they are in the wrong. They also might find themselves avoiding things, wanting to keep themselves out of any uncomfortable situations they don’t want to be.

The ENFPs more toxic behavior might be their tendency to avoid things, and try to just pretend everything is fine. They don’t like arguing or dealing with discord, and so to avoid these things they just pretend they aren’t happening at all. When someone is upset with the ENFP, they might try to brush it often and behave as if this person is overreacting. They do this in hopes that it will calm the situation down, so that they can avoid getting into disagreements and causing trouble between them.

INTJs might be prone to toxic arrogance, which prevents them from really seeing if they are wrong in a situation. The more toxic INTJ is likely to consider themselves above others, always seeing their way as the smartest and more efficient choice. They have a hard time ever accepting their mistakes, and don’t care to hear other people out about things. This toxic behavior causes them to miss out on certain information, since they won’t accept if they didn’t get a certain detail just right.

ENTJs might be prone to a toxic arrogance, which prevents them from ever accepting when they are wrong or have made a mistake. They might only rely on themselves, not wanting to trust anyone else with tasks they think they can do better. This type of ENTJs finds it challenging to hear other people out, especially if they are being criticized even in the slightest amount. They want to see themselves as always efficient and perfect, and fear ever being seen as someone who makes mistakes.

The INTPs more toxic behavior might be the way they overanalyze things, and it causes them to question motives of people when they shouldn’t. They find themselves pushing people away so that they don’t personally feel smothered or vulnerable. Instead of allowing people into their lives, they find every single way to remove them, blaming that other person for the situation at hand. The toxic INTP uses their minds in a negative manner, since the way they analyze situations goes too far and causes them to become fearful of things which likely won’t happen.

The toxic ENTPs has a hard time settling down, and because of this they can constantly push people away. They might bounce from one things to the next, incapable of letting go of their freedom and independence. The toxic ENTP might also find themselves doing manipulative and hurtful things to people, seeking vengeance for things instead of simply moving on from the situation. They can be skilled at finding ways to push buttons, and the toxic ENTP will do this in a more harmful and less playful manner.

ISTJs might be more prone to a sense of toxic arrogance, struggling to really trust or believe anyone but themselves. They find themselves feeling superior to those around them, and might be a bit judgemental because of it. This judgemental behavior can be toxic for the unhealthy ISTJ, since they can often feel like most people are inefficient and not worth their time. It also might cause them to judge their family members, feeling like they aren’t doing good enough.

The toxic ESTJ can be aggressive in a negative manner, always arguing with people and wanting to prove themselves superior. Instead of remaining calm and being logical, the toxic ESTJ is likely to attack those around them in hopes of making themselves the ones in power. Instead of giving people a chance to lead, they take control and demand it no matter what. This controlling behavior can definitely be toxic for the unhealthy ESTJ.

ISFJs who exhibit toxic behaviors, are often more likely to be controlling and hovering people. They do whatever they can to manipulate the people around them to stay in their lives. They use their understanding of those around them to guilt those people into doing what they want. They have a hard time allowing people to make their own choices, instead their desire to keep people close causes them to manipulate and control them.

ESFJs with toxic behaviors are likely to have a more toxic perfectionism. They have a hard letting anyone see their flaws or mistakes, and so they do their best to hide them. This can cause them to point fingers at others, in hopes that their own flaws will not be recognized. Instead of admitting when they have made a mistake, they try to cover this up so that they can avoid trouble between themselves and this person. They don’t want to be seen as someone who is imperfect, and so this version of the ESFJ does whatever they can to defend themselves.

The toxic ISTP is likely to be rather manipulative, and make excuses for their actions. They don’t expect responsibility for the things they do, or the people they hurt. They might not hurt people intentionally but the toxic ISTP is likely to use the excuse that they did not make promises to these people. They use their independence as a way to avoid responsibilities and do whatever they please without consequences.

The toxic ESTP is likely to be extremely reckless, with no care for their responsibilities. Instead of trying to focus on important tasks, they will focus on having fun. They might even be reckless with the emotions of those around them, hurting the people they should be caring for. They do this by bouncing from one person to the next, without focusing on being more apologetic about their actions. Their fear of being held down will cause the toxic ESTP to do whatever it takes to avoid settling.

The ISFPs toxic tendencies might lean towards playing the victim and avoiding discord at all costs. Instead of focusing on their responsibilities they are likely to find themselves only focusing on momentary pleasures. They don’t want to get into disagreements, and so instead they ignore when someone is angry with them and try and brush these sincere issues under the rug. The toxic ISFP can also be self-sabotaging and find themselves getting into bad situations often.

The toxic ESFP is often very manipulative and reckless, seeking out only the things which bring them momentary happiness. They get themselves into bad situations and search for people who will help get them out of it. They don’t like responsibilities and so they reject them, often trying to guilt their loved ones in into getting them the things they want. The toxic ESFP goes from being a lighthearted person, to being someone who is constantly in trouble.