Do You Like to Have Things Documented, Based on Your Personality Type 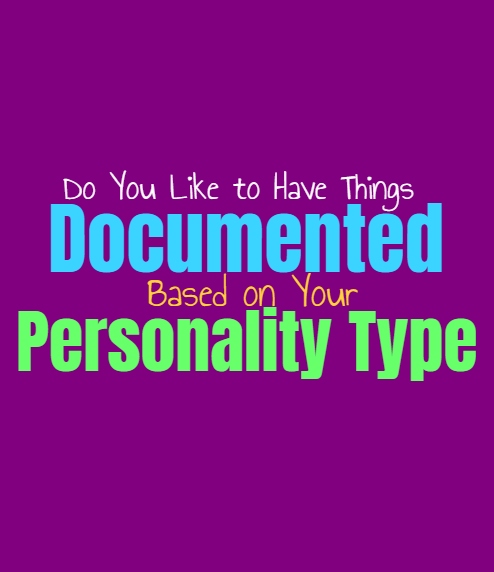 Do You Like to Have Things Documented, Based on Your Personality Type

Some people like having things recorded and documented for future use, or just to have everything organized and in front of them. For others this seems like more work than necessary and really isn’t their style. Here is how much you like to keep things documented, based on your personality type.

INFJs do like documenting and keeping track of things they have experienced. They want to be able to record these things and keep them from being forgotten or lost. INFJs don’t want to document the less important details, but this which matter to them they want to have some sort of means of remembering. They often want to document their experiences with loved ones, needing to have these ways of really holding onto them and their time together. INFJs are often organized people as well, and so they try to find ways of documenting the important details.

ENFJs do prefer to keep documentation, especially when something is important. They want to have these memories documented from loved ones and experiences, but also from other aspects of their daily lives. They are often very organized people and so they realize that sometimes it is important to keep documentation of the things they do relating to work and their daily tasks. For the ENFJ it feels safer to keep these records so that they can go back and use them if things go wrong.

INFPs rarely care about keeping physical documentation, since they focus on cataloging these things mentally. INFPs often remember details and things which are important to them, and are good at using this information to their advantage. They don’t really like keeping documentation though, since this can feel rather boring and tedious. INFPs are creative and imaginative people, who can become bored rather easily of having to keep these types of records.

ENFPs don’t like having to keep documentation for most things and can become distracted from this rather easily. They often feel bored when they have to focus on keeping records of everything so that they can have it for later. ENFPs certainly keep mental records of things which happen around them, and are good are recalling these details when needed. They just don’t enjoy the monotony of having to keep documentation for everything they do and encounter in their lives, especially as it pertains to the more boring daily tasks.

INTJs often prefer to keep documentation, since they believe in having everything covered. They know that having these things recorded can help them done the line. INTJs are prepared and logical people, and so documentation is often something they feel is necessarily to maintain things the way they like. They can often keep these things organized in their own way, knowing where it all is in case they need it later on.

ENTJs definitely believe that documentation is important, especially when it comes to more serious things in life. They want to keep these details recorded in case they need the proof later on. ENTJs belief in efficiency and to be properly efficient they need to keep documentation for most things they do. ENTJs don’t like making mistakes and so they always want to have themselves covered in case things don’t go as expected or as planned.

INTPs do often believe that some sort of documentation is important with most things, since they believe in keeping themselves covered and protected. Maintaining all of this information and ensuring that they can use it later on, is important to the INTP. While they believe in keeping documentation, organization isn’t really their strength. They often have these things recorded somewhere but don’t always have it together in the most organized manner.

ENTPs often believe that documentation is important but they aren’t always good at maintaining this. ENTPs become distracted somewhat easily, wanting to find other things to grab their attention. Having to keep organized and consistent documentation can be a bit draining and boring for the ENTP. They’ll do their best to keep records of the things which they will logically need later on, but don’t like doing this with every little thing.

ISTJs definitely believe in keeping documentation for just about everything in life. They value efficiency and organization and want to be able to keep up with everything around them. ISTJs realize that proper documentation can really help them down the line. Having this information and proof can back the ISTJ up and make their lives much easier in the long run.

ESTJs definitely believe in keeping proper documentation of the more important things in life. Whether this be bank statements or tax information, they want to keep track of these things in an organized manner. ESTJ believe in having everything maintained a certain way so that they can be more efficient and always get things done the proper way.

ISFJs do care about keeping documentation for the more important details. They want to keep records of things this they know they might need this later on. ISFJs also enjoy keeping documentation and records of their memories and experiences with loved ones. They care about keeping track of these things and do enjoy holding onto memories and important details from their lives.

ESFJs do care about keeping documentation and often have a hard time getting rid of even smaller things. This is because they know these details might be useful later on and so they don’t want to regret getting rid of it later on. ESFJs try to keep track of everything and juggle a lot of tasks at once, and so they can often be perfectionists. This is because they want to be able to take care of everyone and don’t like making mistakes.

ISTPs don’t really care about documenting everything since they prefer to live more in the present. They will keep track of certain vital information, but their minds are often where they like to document things. For the ISTP having to keep everything documented and recorded feels a bit draining and often unnecessary. They don’t like investing this much of their time and energy into keeping records when they could be living in the present.

ESTPs don’t really care about documenting every little detail, especially when it starts to bore them. They want to be able to live in the present instead of obsessing over the details of the past. For the ESTP documenting the important things is fine, but they become drained if they have to keep even the smallest of details recorded.

ISFPs aren’t really fans of documenting details and they can become a bit exhausting by this. They prefer to live in the present and just let things happen as they are meant to. Having to document things which aren’t important to them, can feel draining and like a waste of their time and energy. ISFPs enjoy keeping documentation of positive things and of happy experiences, but they aren’t obsessed with doing this.

ESFPs don’t really like feeling obligated to keep documentation, but at the same time they don’t usually throw things out. So they often keep records of things without fully intentending to do this. ESFPs just try to keep things which hold sort of sentimental meaning to them, since they can be rather sentimental people. They enjoy living in the present though and don’t like becoming obsessed with documenting everything.