Here’s How Often You Run Away From Problems, Based on Your Personality Type 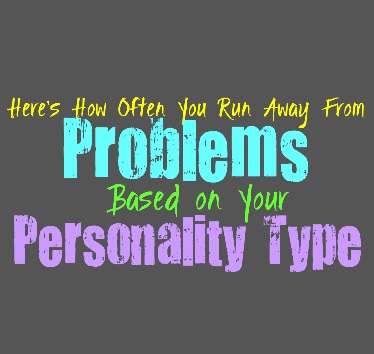 Here’s How Often You Run Away From Problems, Based on Your Personality Type

Some people have a tendency to run away from their more serious problems in life, while others prefer to face them. It can be challenging to deal with certain problems, making a little procrastination a bit easier than actually dealing. Here is how often you run away from problems, based on your personality type.

INFJs try to face their more important problems in life, but there are times when they can avoid things that overwhelm them. INFJs might procrastinate with certain problems they are supposed to solve, trying to process everything before actually attacking the issue. INFJs are often better at solving other people’s problems than they are their own, and find it easier to help their loved ones improve their lives. They will also be able to face problems with people, wanting to find ways to fix whatever is wrong. INFJs simply struggle to handle some of their personal problems, finding it easier to focus on others.

ENFJs don’t like to run away from their problems, instead they want to just face what is happening. ENFJs will deal with their loved ones issues as well, trying their best to take care of them. Most real life problems that they can mend or fix can come naturally for ENFJs. They like to make sure that everything is handled and they don’t want to forget to take care of the important problems. ENFJs can sometimes neglect their own emotional problems though, and have a hard time really dealing with them.

INFPs can sometimes avoid their problems, mostly because they become distracted. INFPs have a hard time focusing on things that can feel overwhelming or cause too much pressure. They might run away from these problems for a bit, needing time to themselves to process their thoughts and feelings. When it comes to their loved ones INFPs try to remain focused, and they don’t want to back away from the things that are important to them. They simply struggle with the problems that don’t seem to have solutions, and often need time to process everything before dealing with it.

ENFPs can sometimes run away from their problems, especially if they feel overwhelmed. ENFPs don’t always find it easy to face certain problems that might arise, and they might find themselves avoiding these struggles. When the ENFP does feel like a problem is too overwhelming, sometimes they simply want to get away from the stress and pressure. They might procrastinate some of these problems, especially the ones that seem to lack an immediate solution.

INTJs don’t like to run away from their problems, instead they want to solve them. When a challenge or struggle arises most INTJs prefer to figure out the best way to handle this themselves. It might require time to really process what is going on, and to do plenty of research in order to learn how to best navigate their struggle. INTJs are very capable of using their intuition and strategic planning in order to figure out how to move forward. INTJs can sometimes have a hard time facing their emotional problems, but they will do their best to try and solve anything that stands in their way.

ENTJs don’t like to run away from their problems, instead they want to solve them. ENTJs are good at coming up with strategic solutions for whatever comes their way, and will work hard to fix things. They don’t like backing down from a challenge, instead they strive to make sure they are doing their absolute best with everything they do. While ENTJs face the problems that can be solved, they can struggle with more emotional based issues. When someone brings them an emotional problem they might become frustrated, wanting to seek a practical solution to everything.

INTPs don’t usually like to run away from their problems, but they can procrastinate them for a while. They are more than capable of coming up with ways to solve problems that arise, and they will often spend a while researching and analyzing ways to best take care of things. INTPs can think things through for a long time inside of their minds, sifting through the information in hopes of uncovering the best solution. While INTPs can definitely come up with solutions, they might spend longer than they have to thinking things through instead of actually taking care of the problem.

ENTPs don’t always have great follow through with their problems, especially if the pressure becomes to be draining. They prefer to focus on the things that inspire them the most, and strive to follow their own path. ENTPs are great at analyzing problems and work to come up with effective ways to solve whatever comes their way. While they are great problem solvers, they can sometimes become bored with certain things if they are a bit too mundane for them. ENTPs don’t necessarily run from problems, sometimes they simply procrastinate them.

ESTJs aren’t likely to run away from their problems, instead they want to find a way to solve them. ESTJs are often good at finding ways to take care of their problems in life, and work hard to keep everything together. They realize that avoiding or running from their struggles will only make things worse later on. They aren’t likely to back down from challenges, instead the ESTJ will work to find a way to efficiently take care of any of their issues in life.

ISFJs often try to face their problems, especially ones that affect their loved ones. Running from their problems can lead to things falling apart and this can be something that upsets or harms the people they care for most. ISFJs don’t like being irresponsible in any way, so making sure they face their challenges in life is often very important to them. The only time ISFJs might try to avoid a problem, is when there seems to be no practical solution for it.

ESFJs don’t often run from their problems, mostly because it could lead to upsetting someone they love. They don’t want to let anyone down, and would be truly upset if they were a disappointment in any way. ESFJs simply want to take care of their loved ones and work hard to make sure they are happy. If there are times when the problems seem too large, the ESFJ might feel overwhelmed and procrastinate certain details for a while. In the end the only problems they are likely to run from are their own personal and emotional issues.

ISTPs don’t necessarily run from problems, but they do sometimes procrastinate them. If it isn’t truly important for the ISTP they can sometimes avoid certain things and responsibilities. When the ISTP does have a problem they have to face, they are often good at figuring out the best ways to overcome what is in front of them. They are good problem solvers, but sometimes they just don’t feel a strong desire to deal with other people’s issues.

ESTPs try to face problems that they can solve, but can run from certain challenges. If the ESTP feels overwhelmed or like what they are dealing with is completely boring, they might avoid it for a while. Most of the time ESTPs simply avoid their problems and procrastinate them until they realize they absolutely need to face whatever is going on. They might seem like they run from problems, but eventually they will come back to them.

ISFPs can sometimes run from their problems, especially the ones that seem far too difficult to solve. When they feel emotionally overwhelmed the ISFP can have a hard time figuring out the best way to come up with a solution. They might struggle to really overcome their challenges, instead they try to avoid whatever is causing them to feel this way. ISFPs will eventually deal with these problems if they have to, or they will have someone they love help them through it.

ESFPs can sometimes run away from problems, especially when they are their own issues. They take care of their loved ones when they can and want to be there for them, but they aren’t always great at facing things that overwhelm them. If there is something that seems to be too much for the ESFP, they can certainly feel the need to run away from the problems. Their idea of running is often ignoring it until it either goes away, or they absolutely have to deal with it.