Surprising Truths About the ENFP Male 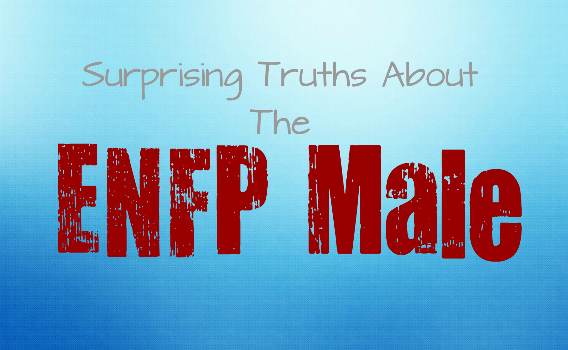 Surprising Truths About the ENFP Male

ENFPs are charismatic and dynamic individuals, with a true hunger for life. ENFP females are often seen as the stereotypical feminine individual, making their natural connection to emotions perfectly acceptable to others. ENFP males are also in touch with their emotions, but this is often expressed in different ways. Each personality type has their gifts and their struggles- here are a just a few truths that you should know about the ENFP male.

They Don’t Hold Back

There are plenty of people who tend to hold back in life, especially when it comes to emotions. The ENFP is not someone to hold back, and will often dive head first into whatever is before him. The ENFP male is consciously aware of his emotions, and even if he fears rejection, he will not hesitate to be open about his feelings. ENFPs will often feel more uncomfortable holding back than they will being open. This openness can sometimes be a struggle for ENFPs, especially since it is an easy way to get hurt. It is simply a part of who they are, and something that should be cherished by others. When they are romantically interested in someone, they will often shower them with compliments and do whatever they can to make that person feel special. ENFPs go after what they want, especially if they get even the slightest inkling that the person they like returns their feelings.

ENFP men might be seen as much more emotional and in touch with their feelings than other men, but they will not be seen as shy or hesitant. A great advantage to the ENFP male, is that they are rarely afraid to make the first move. They are ready and able to initiate contact, and to make their intentions well known. They often are great at playing into those initial butterflies that comes from first getting to know someone, and will use their charm to their advantage.

The thing that many people don’t realize, is that ENFPs aren’t always going to puke their feelings all over someone. This only happens when they feel like they can trust that person, or when a powerful connection is present. They are warm and caring people, but they aren’t open to everyone who crosses their path. If an ENFP shares deep and personal information with you, that means you are extremely special. It would be a foolish mistake to take advantage of their openness, but rather you should cherish it.

Don’t Let The Charm Fool You

ENFP males are extremely charming, and often know just how to make someone fall for them. This can sometimes make other types fearful, especially people who can sense their charming nature. They might appear over the top at times, like they are laying it on a bit thick. This is simply part of their personality, since they enjoy making others feel special. There is a sort of stereotype attached to the ENFP personality, one that implies that the ENFP male cannot remain faithful in a relationship. This is an entirely untrue idea, one that likely comes from young ENFPs who have not grown into their mature selves yet. A mature ENFP is perfectly capable of staying true to someone, especially when they sincerely care for that person. They do enjoy having fun and making life exciting, but they are also perfectly happy to share their lives with one person. They might seem like they are flirting at times, but this is just because they are friendly individuals who enjoy being polite and kind to others.

The charming ways of the ENFP should not be something that scares you away, especially if they truly care for you. ENFPs are natural charmers, and are simply not devious people. They are often extremely honest and upfront about their feelings, even when those feelings change. They truly are not afraid of commitment, but simply won’t jump into something that doesn’t feel right. When an ENFP is ready to dive in, that often means they know that their feelings are real. They follow their intuition when it comes to most things in life, and it rarely steers them wrong.

They Know How To Enjoy Life

ENFPs certainly know how to have fun, and are often seen as energetic and excitable people. They want to soak up everything life has to offer, and oftentimes would prefer to remain positive. Even when things aren’t going so well in their lives they will try to look on the brightside. The ENFP male is sometimes seen as overly energetic, but he simply knows how to enjoy every second. Having an ENFP in your life means you will always have a great time, no matter what you are doing. Whether you are exploring some new and exciting place, or attempting a hobby you never imagined you would try, ENFPs have a way of pulling people out of their comfort zones in the best way possible. Even the simplest of tasks can turn into an adventure that you will never forget.

They might enjoy soaking up all of the good things that life has to offer, but that doesn’t mean they aren’t aware of the negative as well. ENFPs are often very intelligent people, who enjoy doing plenty of research on various topics. They love to learn, which often surprises people who do not truly know them. They often shock people with how much knowledge they possess, making them easily underestimated individuals.

ENFPs can sometimes appear fragile to others, simply because they are capable of being sensitive. They might possess an ocean of feelings, but that does not mean they cannot contain them. ENFPs are often capable of moving on when someone takes advantage of them, and are more than capable of healing from their wounds. People sometimes get this idea that ENFPs are fragile creatures in need of protecting, but in truth they are rather strong individuals with a deep sense of independence. ENFPs want to share their lives with the people they love, and will often find ways of including them. They might give their hearts over to others, but that doesn’t mean they cannot walk away if things go south. They are actually very good at picking themselves up and coping when they are hurt.

ENFPs often seem to move rather fast, and they will come to conclusions quickly. This is because their minds never cease, and are constantly spinning about with a million different thoughts. It might appear like they jump into things too quickly, but in fact they have usually spent hours considering all of their options beforehand. ENFPs have some of the most vivid and active minds in existence, which is often why they bounce from idea to idea so quickly. Usually when it seems like an ENFP is being their most quiet, their minds are the absolute loudest.

Having an ENFP male in your life is a unique and exciting experience. They are great at making others feel loved and appreciated, but they do need some appreciation in return. ENFPs love exploring new possibilities, and if you are willing to participate it will certainly be one hell of a ride.

22 Reasons Why You are an ENFP

How To Fall Completely In Love With An ENFP