How You Respond to a Lack of Inspiration, Based on Your Personality Type 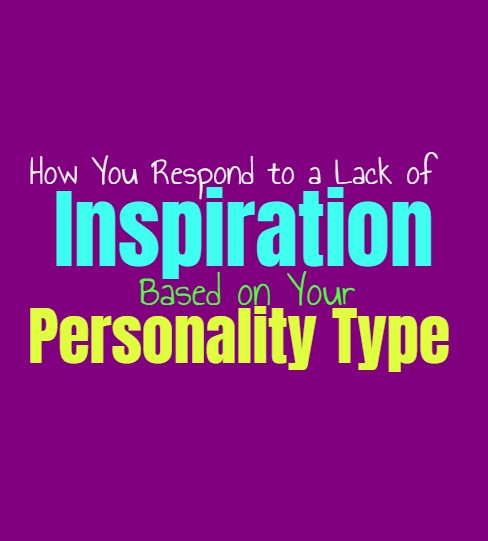 How You Respond to a Lack of Inspiration, Based on Your Personality Type

Having a lack of inspiration can be truly frustrating, especially when you require this for something important. Whether this be deadlines you have to meet, personal creative endeavors you want to explore, or simply tasks that need to be done. It is difficult to handle a lack of inspiration to help you finish the job, but each type will respond to this in their own way. Here is what a lack of inspiration does to you, based on your personality type.

INFJs definitely feel stuck when they experience a lack of inspiration in their lives, and really don’t like being in this type of situation. They want to feel inspired in order to focus on something, and seek out ways to find this type of excitement and passion towards something. INFJs will try to find their muse as best they can, but can sometimes feel a bit impatient with this process. They want to be able to explore the things which inspire them, but when they are lacking this inspiration can feel a bit stagnant.

ENFJs feel overwhelmed when they lack inspiration and often try to push their way through this. They don’t like feeling held back or as if they cannot get the job done simply because they lack the inspiration to do so. They are hardworking people who believe in doing whatever it takes to care for their loved ones and accomplish their goals. This sense of drive can make it deeply frustrating when the ENFJ doesn’t feel inspired, especially since they want to be capable of moving forward.

INFP
INFPs care deeply about finding their inspiration and want to be able to find what triggers their passionate side. For them not having inspiration makes it challenging for them to focus on the things they want to do. INFPs are often artistic people but when they lack inspiration it can leave them feeling stagnant. It likely puts the INFP into a bit of a slump not wanting to really focus on anything else for a while. They care about being able to follow their own path, but not feeling inspired can really hold them back.

ENFPs follow their inspiration and passion, so lacking this can be draining for them. They want to follow what feels right for them and don’t like feeling obligated to do something which does not inspire them. For the ENFP lacking this makes them feel trapped, and a bit stagnant in their lives. They might want to bounce around to different things which might spark their passions once again, trying to find a solution to their struggles.

INTJs don’t like feeling a lack of inspiration, but they often search to find ways around this. They usually try to push through this and find others things which spark their interest. Usually when the INTJ lacks inspiration it is because they don’t feel challenged, and so they need to look for something which provides them with this sense of challenge. They want to be able to grow and learn about new things, and so they will like searching for something else which won’t leave them feeling bored and uninspired.

ENTJs are very driven and focused people who believe in working hard to accomplish their goals. They don’t like allowing anything to stand in their way, even a lack of inspiration. They usually want to find a way to navigate around this and search for ways they can regain this sense of inspiration. ENTJs are somewhat aggressive people who don’t like stepping back, since this feels a bit lazy for them.

INTPs really don’t enjoy feeling a lack of inspiration, since this can make them feel stagnant. They will likely analyze the reasoning behind this lull, pushing themselves to figure out why this is happening. When they lack inspiration they likely feel a bit frustrated with themselves, likely feeling a sense of guilt since they haven’t been able to overcome it. INTPs will try their best to solve the problems, but this might lead them to a cycle of feeling more stagnant.

ENTPs generally go where they feel inspiration, and so they don’t like feeling stagnant or like they are lacking in this. When they do lack inspiration they likely want to shake things up a bit so that they can uncover what might guide them. They do their best to go after the things which might draw out their motivation and passions. Sometimes bouncing around helps the ENTP when it comes to this, and this is why they don’t like just focusing on the thing which isn’t really inspiring them.

ISTJs are focused people and can often find inspiration in their own means. They focus on what they know they need to get done, and don’t really need inspiration to do this. When they have a job to do it is important for them to focus on the facts in order to get this done. They don’t believe in allowing their feelings to prevent them from getting the job done and so ISTJs find inspiration by forcing the situation if they have to.

ESTJs are very hardworking and focused people who don’t really need inspiration in order to guide them. They focus on getting things done and push themselves forward. If the situation is challenging and they don’t really feel motivated, they simply push themselves. For the ESTJ sometimes logic needs to override their feelings, and so inspiration isn’t always required in order to do what really needs to be done.

ISFJs are focused people who believe in getting things done and tending to the needs of their loved ones. While it can be challenging for them to overcome a lack of inspiration, they often do what they can to push through this. They don’t want to let their loved ones down and so they often push themselves even when they are struggling and feeling truly exhausted. For the ISFJ it can be a struggle but they do whatever they must, often leaving themselves drained afterwards.

ESFJs do struggle when they are lacking inspiration, but they often focus more on responsibilities than feelings. When they are lacking this inspiration and feeling drained, they are likely to try and push forward and ignore what they are feeling. They might be drained and feel overwhelmed during the process, but ESFJs don’t want to allow these things to stop them from caring for the ones they love and being able to provide for them.

ISTPs don’t like feeling as if they have lost their inspiration, since they go after the things which excite them. When they feel stagnant and are lacking inspiration, the ISTP often wants to bounce around a bit. They shake things up so that they can figure out what will really leave them feeling excited and passionate about moving forward.

ESTPs do struggle when they are lacking inspiration, since they want to experience things which excite them. When they are feeling a bit lost in this way, they might want to shake things up so that they can regain their focus on what they want and what matters to them. Sometimes just changing a few things and mixing it up can give the ESTP their inspiration once again.

ISFPs really don’t like feeling as if they have lost inspiration, since this is something which is deeply important to them. They care about following their hearts and don’t want to just be controlled by responsibility or duty. For them lacking inspiration means they need to take a step back and figure out what went wrong and how to regain their passionate side once again.

ESFPs don’t really like moving forward without feeling a sense of inspiration in their actions and choices. They want to go after what feels right in that moment and so sometimes shaking things up can help them get back on track. For the ESFP doing anything without feeling inspired makes them feel drained and even a bit lost in their path.