How Likely You Are to Have an Identity Crisis, Based on Your Personality Type 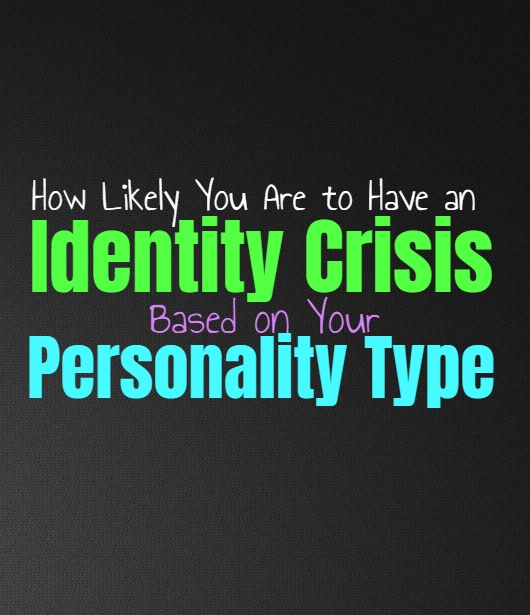 How Likely You Are to Have an Identity Crisis, Based on Your Personality Type

Most people do struggle with uncovering their identity and gaining a strong foothold in who they are deep down. This is something which can take some time for most people, but for some it is even more of a long term battle. Here is how likely you are to have an identity crisis, based on your personality type.

INFJs do often experience feeling like they have lost grasp on their personal identity, since they are always reevaluating it. They might have a hard time really coming to grips with who they are, or who they believe they want to be. For INFJs assessing their own sense of identity is something which can be an ongoing battle for them. They often feel misunderstood by others, but there are times when they don’t entirely understand themselves or have a grounded sense of who they are.

ENFJs do sometimes have a hard time developing a strong sense of identity, since they can focus so much on tending to the needs of others. They are strong-willed people who often show themselves as independent and focused, but that doesn’t mean that they don’t struggle to really have a firm sense of their own identity. They care about knowing who they are and want to develop this strong sense of self, but they can certainly struggle with an identity crisis if they feel like they haven’t quite grasped a hold of this.

INFPs spend a lot of their life trying to understand themselves and really dive into their sense of identity. They care about understanding their own feelings and thoughts, and so they spend a lot of time on their own just diving into this. For the INFP an identity crisis is more likely to happen when they are feeling some sort of existential crisis. They might not entirely feel a sense of hope or purpose and when this happens they do struggle to really feel grounded.

ENFPs spend a lot of time trying to understand their own thoughts and feelings. They spend a lot of time inside of their own minds wanting to sift through all of these different thoughts. For ENFPs have a strong sense of personal identity really is important to them, but it does sometimes become difficult. ENFPs might caught up in the things going on around them and feel pulled in different directions, which can make it challenging for them to hold onto this firm sense of identity.

INTJs are often secure in their own identity and their personal goals in life. They don’t like feeling as if they are lost or not grounded in a strong sense of self-awareness. They are often focused on learning and growing as a person and to do this they really do need to have a firm knowledge of who they are and what they want. INTJs spend time analyzing information so that they can understand their personal goals and become truly focused on them.

ENTJs don’t like feeling lost or like they don’t have a strong sense of self-awareness. For them having a firm identity in themselves is something they find valuable, since they care about fighting for goals which will matter to them. ENTJs definitely spend time analyzing their own motives so that they can be sure of themselves and what they truly want. ENTJs are often aware of these things and they are less likely to really endure an identity crisis, since their goals are often rooted in facts and information.

ENTPs try to focus on growing and not remaining stagnant long enough to really dive into some sort of identity crisis. For them it is more rewarding to continue absorbing knowledge and pushing themselves to advance. For the ENTP sometimes it can be difficult to really have a firm sense of identity when they find themselves bouncing around so much. They also struggle to really process their own emotions sometimes and this can certainly lead to a bit of an identity crisis.

ISTJs do often have a strong sense of their own identity and don’t really struggle with this as much. They come to be very aware of who they are and what they stand for. ISTJs often know what they want in life and this sense of laser focus really helps them move forward. They don’t want things to hold them back and they don’t allow their emotions or doubts to hold them back or get them into sticky situations.

ESTJs are often very firm in who they are and so they don’t often feel an identity crisis overwhelming them. They are independent people who believe in being strong and focused on their goals. They don’t want anything to hold them back in life and prefer to focus on obtaining their goals and moving forward. For the ESTJ allowing emotions to get in their way and allow them to doubt, is not something they care much for.

ISFJs are often focused on caring for others and their identity can easily become wrapped up in this. Since they care so much about helping others they might lose a sense of their own desires and goals. This can certainly cause the ISFJ to experience an identity crisis, since they might not be completely aware of what they truly want or who they are without the people they love and take care of.

ESFJs might struggle with their own sense of identity throughout their lives, especially before they develop firmer boundaries. When they are younger it can be hard for them to really focused on what they want, since they focus so much on caring for others. This can make it challenging for the ESFJ to really hold onto their own identity, since they don’t spend enough time analyzing themselves and their own personal needs.

ISTPs are often free-spirits who focus very much on living in the present moment. They rarely experience a doubt of their own identity, since they are comfortable reevaluating this from time to time. ISTPs live in the moment and are open to changes, and are often willing to change their own beliefs or desires as time goes on. They don’t need to have firm identifiers in order to know who they are, they simply need to focus on what they want and what excites them.

ESTPs don’t usually experience an identity crisis since they enjoy focusing on living in the present and going after what they enjoy. ESTPs want to explore their options and are often open to change and new experiences. This openness helps them becomes much less weighed down with this idea that their identity is something which has to be firm and unchanging.

ISFPs are very connected to their identity and who they are, and so when something shakes this up it can be upsetting for them. They want to understand themselves and their own emotions and work hard to get a grasp on this throughout their lives. For the ISFPs their own identity really is something which matters to them, but they also work hard to be grounded in this realization.

ESFPs care about their own sense of identity and don’t want this to get shaken up too much. For them it is important to follow what feels right and go after their inspiration. They follow their hearts and this is often what leads them in life, it is also what gives them a sense of personal identity. If something causes the ESFP to doubt this then they can certainly experience a bit of an identity crisis.