Can You Create a Calmness Around You, Based on Your Personality Type 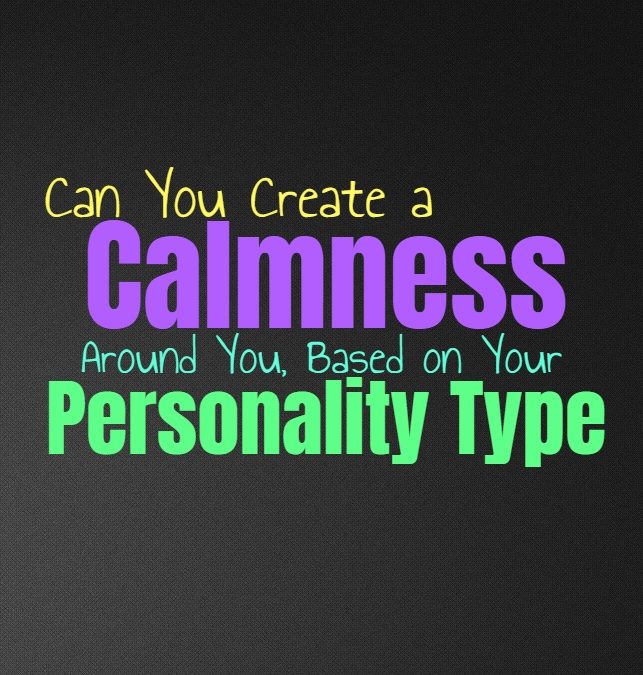 Can You Create a Calmness Around You, Based on Your Personality Type

Some people are naturally skilled at creating a feeling of calm around them. They know how to bring others down and keep them from overreacting to things. Their sense of warmth and understanding can really help relax the people around them and create this sense of harmony in their environment. Here is how good you are at creating a sense of calmness around you, based on your personality type.

INFJs are often great at relaxing others and ensuring that they don’t allow their emotions to get the best of them. They can usually find the right words to say in order to help these people relax and take a step back for a moment. INFJs are capable of connecting with those around them, since they have a natural empathy which helps aid in this task. If someone is truly in need of calming down, then most INFJs are definitely capable of helping them with this. They are good at maintaining a sense of calm around them, especially if this is what people want.

ENFJs are often good at helping to adjust the mood in the room, and so they know how to create a calmness around them. If someone is feeling anxious and in need of someone who can calm them down, the ENFJ knows how to do this. They can connect with others and know how to make them feel more relaxed and less on edge about whatever is stressing them out. Their sense of support and warmth is often something which does create a calmness around them.

INFPs aren’t really good at creating a certain mood unless it connects with what they are personally feeling. They don’t naturally find it easy to manufacture some sort of emotion which they aren’t actually experiencing themselves. They certainly have a strong energy which can cause others to get a sense of their mood, but they cannot manufacture calmness unless this is what they are actually feeling themselves. For the INFP this just doesn’t come naturally, since they believe in being sincere and allowing others to feel whatever they are truly feeling.

ENFPs don’t really like feeling this need to manufacture a specific mood or sense of calmness around them. They are in touch with their own emotions and aren’t likely to pretend to feel any differently. If they are feeling relaxed and in control, then this sense of clam is definitely likely to rub off on those around them. When the ENFP is feeling calm they are great at relaxing others and making them feel a bit more at ease with the situation. But they won’t pretend to feel this way just because someone else needs it.

INTJs aren’t really in the habit of trying to create a certain mood around them. They prefer to live their lives their own way and don’t like feeling obligated to make others feel a certain way. INTJs also aren’t the most outwardly expressive people, since they keep their feelings inside and focus more on practical things. When it comes to a problem in the room around them, INTJs want to solve it rationally and logically. They aren’t a fan of feeling obligated towards the emotions of those around them, and their idea of creating a sense of calm is done by solving the problem rather than trying to control emotions.

ENTJs aren’t naturally in touch with the emotions of others, or even with their own inner emotions. Trying to control the feelings around them isn’t something the ENTJ is really all that skilled with. They will do what they can to help people solve their problems, and if they are creating a sense of calm it comes from making the situation better. ENTJs don’t usually do this in a more empathetic or emotional manner though, instead it is by finding practical ways of solving the problems around them.

INTPs aren’t really that in touch with their inner emotions and so sometimes feeling obligated to calm others down just isn’t that easy for them. They care about those around them and want to try and help, they just don’t always know how to approach this. For the INTP it is best to find more logical ways of solving problems, and to them this is often the way to make others feel calm about what is going on. They might want to create this calmness around them, but navigating emotions just isn’t easy for them.

ENTPs aren’t naturals are navigating emotions or finding how to create a sense of calmness around them. They do however find ways to make this happen by solving the problems and trying to use logic to facilitate this sense of calm. For the ENTP it is easier to solve the problems in a practical way, in hopes that this will actually calm others down. For them creating a certain mood around them can feel unnatural, unless it is their actual mood and they are just trying to allow this to rub off on those around them.

ISTJs are problem solvers and are more practical people, and so for them creating calmness is done by ensuring that everything is taken care of. They work hard to make sure everyone around them is cared for in practical ways, and try their best to minimize stress this way. They create calmness by making sure everything is handled, but not by trying to be empathetic and emotional people. ISTJs are supportive they just don’t find it easy to understand or respond to emotions, and so they don’t create calmness in this way.

ESTJs try to create a sense of calmness around them by ensuring that all of the practical needs of their loved ones are met. They work hard to provide a sense of security and comfort, not wanting to let anything go wrong by making mistakes. They aren’t great at creating a sense of calm by being emotionally supportive though, since this can be challenging for the ESTJ to really know how to deal with.

ESFJs are often good at creating a sense of calmness around them, since they are empathetic people. They want to have harmony in their environment and care deeply about making sure everyone they care for is happy and comfortable. For the ESFJ facilitating this calm mood is important, since they really don’t enjoy when things are tense and uneasy in their environment.

ISTPs don’t really find it easy to create a sense of calm around them since this isn’t natural for them. They don’t really know how to make others feel a certain way by connecting to their emotions. ISTPs will do their best to use logic in order to create this calm mood, but they don’t do it by a sense of empathy. They are logical people though, and can use facts to ensure that everyone knows what is going on.

ESTPs do care about helping others feel at ease, and they are sometimes capable of creating this calmness around them. Most of the time though ESTPs are high-energy people who bounce around from one thing to the next. Because of this it isn’t always easy for them to facilitate a calm mood. They can become so caught up in their own thoughts and feelings and so it becomes challenging to really figure out how to create this calm mood.

ISFPs are sensitive to the feelings of those around them, but creating a certain mood or sense of calmness isn’t always natural for them. ISFPs have strong inner emotions and they find it difficult to pretend that they are feeling differently just for the sake of someone else. They want to comfort people but they do this by showing their support and being open and honest with them. For the ISFP just working to create a false sense of calmness isn’t natural for them.

ESFPs want to be supportive to those around them but they don’t find it natural to create a sense of calmness around them. They care more about being sincere and will do their best to be there for someone who is stressed out. ESFPs can be high-energy people themselves though, and so these emotions often show through whether they want them to or not. They just believe in being true to themselves and sincere about what they are feeling.