ENTJ Motivation: How the ENTJ Deals with Procrastination 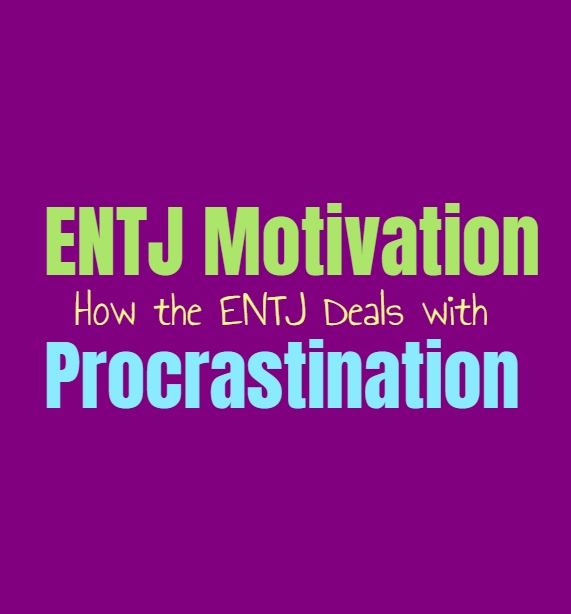 ENTJ Motivation: How the ENTJ Deals with Procrastination

ENTJs are often very straightforward and focused people, who believe in working hard to get things done. While they are very goal-oriented and enjoy pushing themselves to accomplish many tasks at once, this doesn’t mean they never struggle with a lack of motivation. Even the most naturally motivated and focused people can have things they procrastinate or struggle to really get done in a timely fashion. It is simply something we deal with as humans, some more than others. For the ENTJ there are ways in which they often overcome these struggles, but it doesn’t mean they don’t deal with them as well.

Sometimes ENTJs will lack a sense of motivation when they don’t see enough reward in their investment. If they feel like they are spending a lot of hard work and energy into something which won’t yield anything worthwhile, they will lose interest in this project. For the ENTJ it is difficult to really feel a sense of motivation and excitement for a project which doesn’t seem to have a goal in mind. They care about building their future and want to work hard to get things done, but won’t be able to really see a reason for this if their project is a waste of their time. If the ENTJ cannot see the outcome and the bigger picture, they start to lose inspiration and motivation entirely. They might have certain obligations which they are signed onto, but if they don’t have this reward in mind it becomes exhausting for them to continue. This is when the ENTJ might start to procrastinate, or find that they just don’t have the desire to finish these projects in a timely fashion.

ENTJs are also perfectionists which can result in far too much energy being invested into making something flawless. Their desire to get things right and never fail can actually put a lot of pressure on their shoulders. They may have some projects which have left them feeling drained and overwhelmed, simply because it just too much. They find themselves wanting to ensure that every detail is perfect and efficient and this can be a challenging process. ENTJs work hard for this though and don’t like feeling as if they have failed or cannot complete something to their own high standards. When they face a project which seems a bit challenging or overwhelming, they might find themselves struggling to find the motivation to take this on. If they fear they cannot make this perfect, they may take time to prepare and want to be sure they can improve. This can sometimes cause them to procrastinate with this project, putting it off until they feel more secure which may never actually happen for them if they are having these doubts. ENTJs do have sometimes unreasonably high standards, but this is because they care about putting their all into what they do.

Sometimes ENTJs can take on far too much at once, since they don’t really like having limits for themselves. ENTJs often feel like they should be trying to accomplish so many things and goals at once, and this can become overwhelming. Instead of moving slowly they want to be capable of doing things that others are not and so they do push themselves. While they don’t like taking on things they are not capable of accomplishing, they can however take it all on at once and weigh themselves down a bit. ENTJs may have so many tasks and responsibilities which they know they can accomplish, but even still taking them on at once can leave them feeling a bit overwhelmed. If they have some tasks they have procrastinated they might feel drained, not really knowing how to respond or handle this situation. They might feel like they don’t know where to begin when they are overwhelmed, since they still want to ensure that everything is handled perfectly.

How They Can Overcome These Struggles

For the ENTJ procrastination comes from more specific reasons, since they are often focused and driven people. One of the main things is to see the bigger picture when it comes to their ultimate goal and to realize just how rewarding it will be when it finished. Seeing those rewards and knowing that the effort is worthwhile is often one of the more useful things for the ENTJs motivation. They need to know they are working towards a goal which matters, not just wasting their energy invested in something useless.

Breaking their process down can help too, not feeling overwhelmed by the mountain of things they need to finish. Taking it one step at a time and watching the progress move forward is going to help the ENTJ regain a sense of focus and composure. When they have too much going on it can stress and overwhelm them, and so taking one step forward and just doing one thing at a time is really the best advice for the ENTJ. They need to not allow themselves to feel like they have too much and not enough focus to get it all done. Taking on every project and trying to finish it at the same time is something which will cause the ENTJ to procrastinate even beginning it in the first place. Taking it one step at a time and organizing which to begin first, is likely to help them find some structure. Structure is important for ENTJs, since they need to have some idea of where to go next and how to approach things strategically.