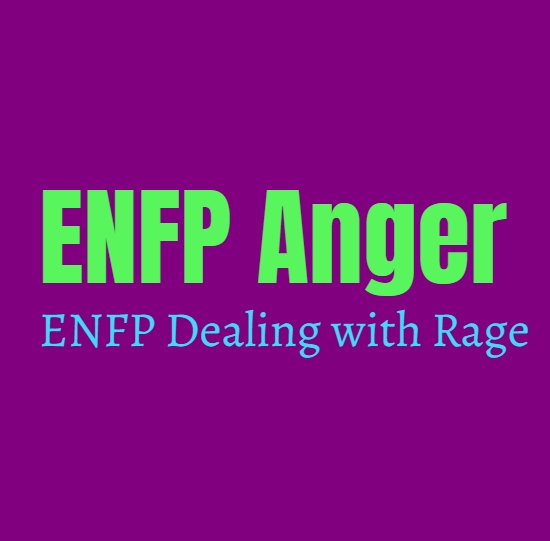 ENFPs often want to hide their anger or rade, not wanting to be someone who is angry towards others. They don’t like feeling like their behavior could hurt someone else, and certainly don’t want to be viewed as an angry person. For the ENFP it feels better to focus on positive emotions, rather than allowing themselves to become weighed down by the negative. They try to avoid becoming angry at others, wanting to keep themselves drawn towards what makes them feel good and happy. This can sometimes cause the ENFP to repress those feelings without meaning to, since for the ENFP it is deeply important to express their emotions. This causes certain feelings of anger to find other means of being expressed.

ENFPs are often angered by injustices or feeling like people just don’t care about others. Witnessing people without good moral judgement simply going about their lives not caring how they affect others, can become very frustrating for the ENFP. They have strong inner morals and believe in following what is right, and can become rather firm about these beliefs. When they feel like someone is selfish and has no concept of right and wrong, it can become rather frustrating for the ENFP. They become especially angry with people who go around hurting others and not caring how they are affecting the world around them. Someone who follows their own desires and doesn’t seem to consider other people or making a difference in a positive way, can feel like an affront to what they stand for. For the ENFP this can be something which really leads to them becoming angry towards that person, and they might even have moments where they snap at these people.

ENFPs can also become angry when someone continues to challenge their own beliefs. ENFPs don’t mind if someone disagrees with them, what they do mind is when that person persists about this. If someone continues to come after the ENFPs character and beliefs, they can become very angry at them. They don’t want to start trouble or discord, but they often find it challenging to hold back when this happens. For the ENFP they will reach a breaking point and have a hard time not responding to someone like this. Having anyone who is incapable of taking a step back and needs to continue to push their beliefs onto the ENFP, can cause them to experience a built up sense of rage. They stand firm on those inner morals and values, and having someone continue to challenge this is truly an attack against who they are. ENFPs don’t believe in allowing others to behave this, and can even become protective of others in these situations. When they witness someone attacking another person, the ENFP can become very angry over this.

Coping with the ENFP Rage

ENFPs will often attempt to remain calm when they are angry, but this is something which they can only repress for so long. They are likely to really unload on someone when they reach their breaking point, and this can be rather intense and even frightening to witness. The usually sweet and bubbly ENFP becomes filled with a righteous anger, and a rather precise way of attacking someone. ENFPs can store up all of this information against a person, and all of the reasons why they know that person is wrong or immoral. When they finally do unleash this rage, it is often very pointed and can tear that person down in ways which leave the room almost in shock. The ENFP almost makes a complete switch of their normally soft personality, and this is something which can be unnerving for people who do not expect it. They might feel a sense of guilt when this is over, wishing they hadn’t unleashed with quite that level of rage. While the ENFP might feel bad over this, they can also still feel like it was the right choice and justified at the same time. They don’t like being seen as an angry person, but they do feel like it is important to stand up for what they believe in no matter what.

For the ENFP it is important to process those feelings of anger instead of trying to replace them with positivity all of the time. The fact that they are kind and caring people is a wonderful thing, but that doesn’t mean they should neglect their negative emotions either. ENFPs feel things deeply which is why it is important that they attempt to express that anger before it turns into a sense of rage. If they can find healthier ways to communicate to someone when they are angry, it can help them avoid the blow up later on. Setting boundaries can also be rather important for ENFPs, that way they can avoid having people continuously cross those lines until they become overwhelmed by it. Setting those clear boundaries from the start can show people that the ENFP is serious and helps them realize where they need to take a step back before it becomes worse.