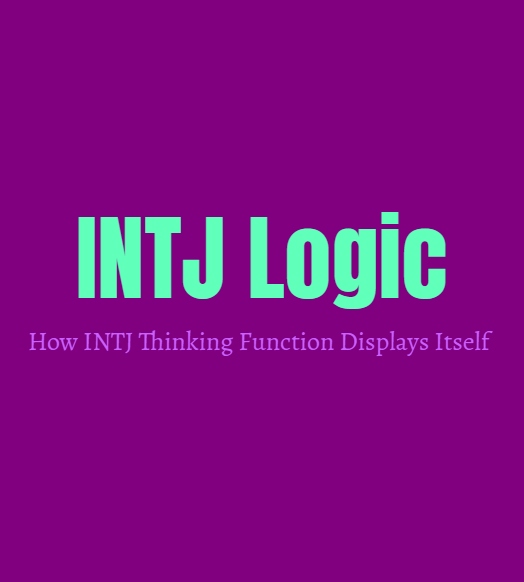 INTJs definitely utilize their thinking function very much, but it is actually their auxiliary or secondary function. Their dominant function is their intuition, but they combine this with their extraverted thinking skills in order to help them process information and make decisions in life. This combination is part of what makes the INTJ who they are, and what makes them such naturally efficient people. For the INTJ their thinking function is a vital part of how they collect and process information, and is definitely what drives them to get things done and always be accurate in their methods and approach.

The INTJs thinking function is connected to facts and details, and so this is why they believe in always being accurate. They pick up on information from the world around them and filter this through their intuition as well. Combined these functions help the INTJ come up with logical future predictions, which is what makes them so excellent at strategizing and problem solving. Their choices are often made solely based on facts and logic, and this is why they care about doing things efficiently. For the INTJ following a strategy and plan is important, since they don’t believe in making mistakes or having to fix things later on. Instead the INTJ wants to get things right the first time around, and believe in striving to achieve all of their goals. Their Te is a big part of what drives them to achieve these goals with precision and efficiency. It helps them to strategize and plan things out and be sure they are always on track towards their goals and building something truly meaningful and valuable to them.

For the INTJ combining their extraverted thinking with their introverted intuition, is what helps them catalog massive amounts of facts and details over time in order to predict future outcomes. They take in so many details and pieces of information and sometimes they don’t even recall where they picked up these facts over time, this is attributed to their intuitive subconscious. They filter all of this information and analyze it in order to really be sure they know what they are talking about. INTJs don’t simply jump into things and believe in always being sure of themselves and what they know. For them being ignorant is one of the worst things, which is why they always strive to be knowledgeable and aware of the truth. When the INTJ is sure of something it is because they have spent so much time researching and analyzing the facts and details. INTJs are often organized with their thoughts, wanting to plan things out in steps and procedures. They really do care about spreading the truth to others as well, and for them being someone who is always upfront and honest is important.

How It is Displayed

For the INTJ their thinking function does make them rather direct to the point with things. They express themselves in ways which can be difficult for some people to really deal with at times, since they aren’t always sensitive to the emotions of others. INTJs are more focused on accuracy and to them being completely honest is truly important. This can be upsetting to people since the INTJ does sometimes come across as harsh when they are just trying to be accurate and upfront. The INTJ is seen as someone who will always be focused on facts and on getting things done efficiently. This does also cause them to be viewed as goal-oriented and often successful people. INTJs aren’t afraid of going after what they want and can be aggressive in pursuit of what matters to them. INTJs are rarely seen as lacking focus or drive and this is in large part to using strong extraverted thinking function. The INTJ is someone who doesn’t believe in making excuses and who is not afraid of speaking their truth. This sense of direction and drive is definitely something which stands out when it comes to the INTJ, and this is often a big way in which their extraverted thinking is expressed and displayed outwardly.

While INTJs are focused and efficient people, sometimes being someone who is always focused on getting things done and being right, can be hard for their loved ones. INTJs do care about the people close to them and strive to be supportive and helpful, but they aren’t very connected with emotions and being expressive about their feelings. This can sometimes be hurtful to those closest to them, since they might say things which upset them unintentionally. INTJs strive to always be honest and accurate, and this does make them appear harsh at times without even meaning to be. It isn’t necessarily the INTJs fault, but they can benefit from being able to learn how to be a bit more sensitive to the people who matter most to them. Sensitivity might not be their strong suit, but the INTJ is more than capable of growth and of becoming stronger in all of their functions.