Do You Respond Well to Being Taunted, Based on Your Personality Type 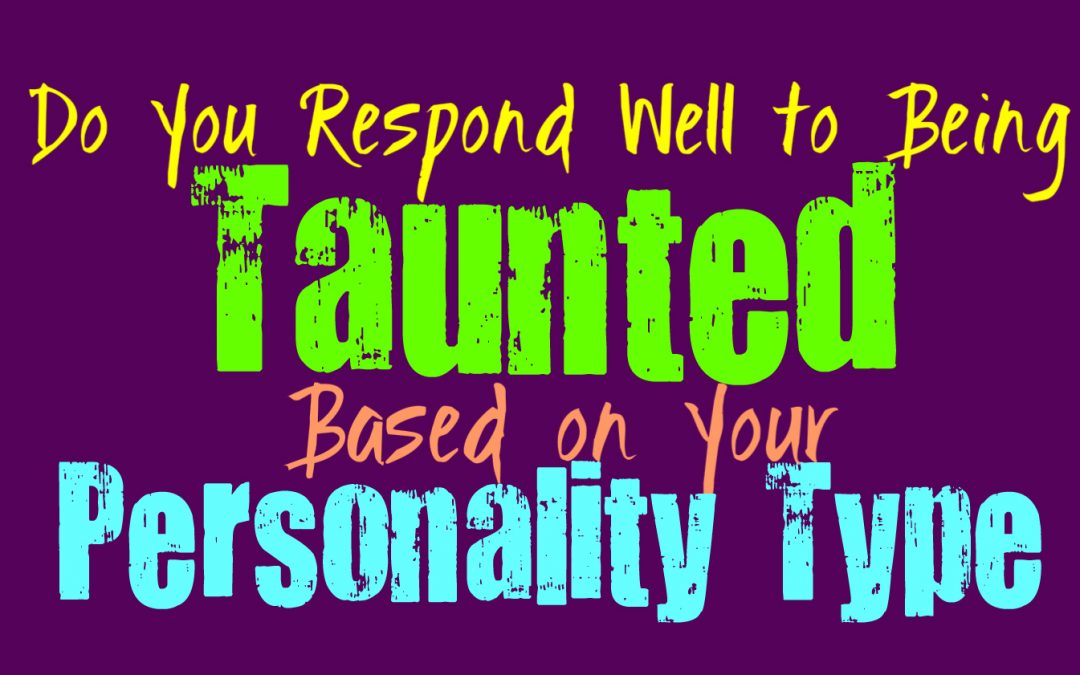 Do You Respond Well to Being Taunted, Based on Your Personality Type

Some people seem to handle being taunted, since this doesn’t usually cause them to get angry or worked up. Other people can be goaded into certain challenges, since they don’t like when someone taunts them in this way. Here is how you respond to being taunted, based on your personality type.

INFJs don’t usually find themselves responding well to being taunted, and usually become annoyed by these situations. They are often rather aware of people’s motives and intentions, and so they can become easily frustrated when someone challenges them. INFJs will sometimes try to ignore someone who is taunting them, and simply remove that person from their lives. There are times when they might take on the challenge and do their best to prove this person wrong and shut down their taunting behavior. For the INFJ it simply becomes aggravating to have someone try and draw them out, since they prefer to have more self-control than this.

ENFJs don’t respond well to being taunted, instead they often take on the challenge. ENFJs can be competitive people, who don’t easily back down from someone trying to show them up. They usually find themselves goaded by people when they do this, and they will try hard to prove that person wrong or shut them down completely. ENFJs have strong-willed personalities, they aren’t afraid of taking someone on if that person seems to deserve this based on their behavior.

INFPs usually try to stay away from people who taunt and push them in the wrong direction. There are times when they can feel challenged by someone who taunts them, and they might take this on more than people expect them to. INFPs are cowards who are afraid of standing up to people, they simply prefer to do this when it feels right. They follow their hearts and the inner morals which guide them down the path that feels right for them.

ENFPs can actually be surprisingly competitive people, especially when someone continues to taunt them. They don’t bend to the will of others and will stand up to someone who is being aggressive towards them. If a person feels the need to taunt the ENFP, they will want to show that person that they aren’t afraid of them. ENFPs sometimes struggle with being taunted, and will take this as a challenge that they don’t want to back down from.

INTJs don’t usually take kindly to being taunted by someone, and will often take this as a bit of a challenge. They are strong-willed people who believe in standing up for themselves when they must. If someone is taunting the INTJ they will often make their boundaries rather clear, and will make it obvious that they won’t stand for this. They might seek to take on the challenge and find a way of proving to this person that they aren’t someone to be messed with.

ENTJs usually respond to someone taunting them as a challenge, and they don’t like simply ignoring it. When someone is pushing their buttons the ENTJ will want to shut this person down, or find a way to show them they aren’t someone to be messed with. ENTJs are strong-willed people who don’t like allowing others to push them around, and they aren’t afraid of standing their ground. When they are in a situation where they need to make their strength known, they will certainly do so.

INTPs often become annoyed with people who taunt them, but they try not to make a scene. They don’t like when someone challenges them in this way, and will often seek to uncover their motives. If the INTP feels like this person is trying to push them around, they might want to find a way to unveil their behavior to others. INTPs don’t often enjoy discord when it seems useless, but they also don’t want to allow someone to demean them. INTPs will often stand up to this person but they will try to do it in a manner that makes them still look appropriate.

ENTPs usually take on the challenge when someone taunts them, and might enjoy getting into a debate with them. ENTPs can often shut people down by using facts and logic, and are naturally good at doing this. They aren’t usually afraid of people taunting them or trying to challenge them, and are actually comfortable in these situations. ENTPs are strong-willed people who often enjoy getting into situations that might be a bit of trouble.

ISTJs really don’t like being taunted, but they often try to ignore people who are being idiotic. They will do their best to make their boundaries clear and give people a chance to respect them. If someone continues to push the ISTJ and taunt them, they often can be a bit prideful in these situations. ISTJs will do their best to prove to everyone that they aren’t afraid of taking on the challenge, and will likely to whatever it takes to best the person who wants to taunt them.

ESTJs don’t take kindly to being taunted, especially since they can be somewhat prideful and competitive people. When someone attempts to goad them into things, the ESTJ often takes this as a situation where they need to prove to others how strong-willed and capable they are. While ESTJs won’t be goaded into doing anything they deem stupid or pointless, they will still find a way to make the person taunting them feel a bit foolish.

ISFJs can become truly annoyed when someone tries to taunt them, but in most situations they will pass it off. They try to avoid discord and want to do their best to make people get along with one another. ISFJs often try to make amends or calm down the situation when someone is taunting them, and they are often very good at this. If someone continues to push their buttons the ISFJ will likely shut this person down and possible even remove them from their lives.

ESFJs certainly don’t appreciate someone who taunts them, but they often try to shrug this off. They don’t like discord and want to make things harmonious in their environment. They will seek to make things right and calm down whatever negativity is occurring in their surroundings. ESFJs can usually make things right and find a way to force people to back down. If someone continues to taunt them in a negative way, the ESFJ will simply find a way to make them stop, or remove that person from their lives completely.

When someone taunts the ISTP they usually are good at ignoring this, and are rarely bothered by what other people think or expect from them. They can often block things out when they want, and are perfectly capable of ignoring someone who seeks to taunt them. If the ISTP does find themselves annoyed by this situation, they will simply find a way of shutting that person down or making them feel a bit foolish for their actions.

ESTPs can often ignore people who taunt them, especially if that person seems a bit uninteresting to them. Usually ESTPs recognize when someone is just trying to push their buttons, but there are moments when they can let their emotions get the best of them. ESTPs take on challenges in life, and enjoy diving into new experiences with a sense of excitement and eagerness. If someone does seek to taunt the ESTP constantly, they might feel the need to push back against this.

ISFPs can become upset with people who taunt them, especially if they do this in a negative manner. They might even seek out loved ones to defend them or make this person leave them alone. ISFPs don’t want to deal with this type of drama in their lives, and prefer to be around people who respect and care for then. ISFPs don’t like being pushed in this manner, but they also don’t want to find themselves getting into a situation that creates discord and discomfort.

ESFPs usually become annoyed with people who taunt them, but they will try to pass it off as amusing. ESFPs just want to get along with people and strive to make the most out of the present moment. For them it is important to enjoy their lives and seek out the things that make them happiest. ESFPs will likely joke around with the person who taunts them, and might even respond with a witty comeback. If the person continues then they won’t be afraid of unleashing a harsher side to their personality.