INTP Virtues: The Importance of Inner Morals for the INTP 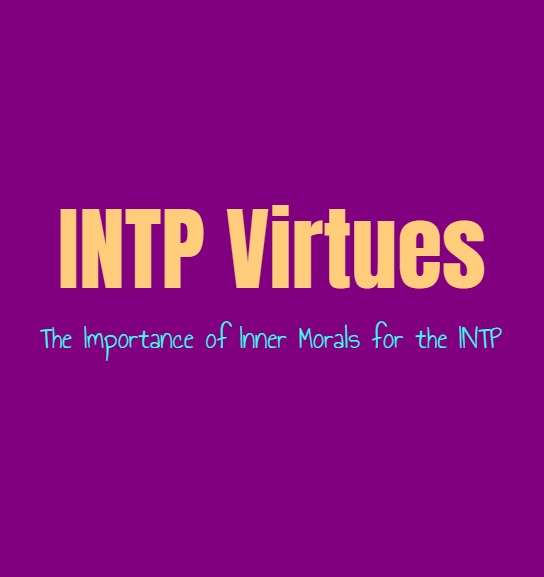 INTP Virtues: The Importance of Inner Morals for the INTP

For the INTP morals are important, but something they often battle to define. They often go back and forth between the heart and the head, making it challenging for them to really definitely decide which things they view as right and wrong. INTPs can often be rather focused on a viewpoint which is in shades of grey, and this can make it hard for people to really understand where the INTP stands with things. They weigh so much into their choices and analyze information over and over before really feeling sure about anything. While the INTP might have certain virtues or morals, that doesn’t mean they are stereotypical ones.

What Being Virtuous Means to the INTP

For the INTP the idea of being virtuous can seem unrealistic at times, like a goal set by dreamers. Not that they believe people cannot be moral, they just don’t necessarily see people as reaching that over the top level of virtue that some aspire to. For the INTP this can be something they see in books and movies, someone who stands above the rest as a moral leader and strength. They can be cynical minded at times, and might find it hard to really believe that many people in the real world can ever live up to this. INTPs don’t want their expectations to be quite so high, instead they want to try to be more logical and realistic about these situations.

For the INTP being a virtuous person shouldn’t be about being someone who always makes the right choices and always knows the difference between right and wrong. If this were the case then the INTP would see it is impossible to ever really reach this goal. To them being a person with strong morals, is someone who always strives to help people and guide them in the right direction. Someone who will go out of their way to improve the lives of others, and help them to overcome whatever they are struggling with. This is something they often meet with logic, as the INTP is good at problem solving and they want to try and help people by using these natural abilities. While they might not be emotional people, that doesn’t mean the INTP doesn’t possess strong morals which they value deeply.

For the INTP morals should not be based solely on emotions, as this can be untrustworthy and vary from moment to moment. Their feelings to come into the equation a bit more than they might realize or want to accept, but they don’t dictate their choices alone. The INTP uses logic and reason in order to come up with their own internal set of morals and values. INTPs have complex inner minds, and their thoughts are very personal and intricate. They use those complex minds in order to sift through facts and information and come to their own logical conclusions. This is something which makes people question the morals of the INTP, but they would be wrong to do so. While they might not have morals based on emotions and inner feelings, they base them on things which are sturdy and concrete. They don’t change these beliefs based on the way they feel at any given moment, instead they are well rooted in who the INTP is and what they are sure of.

What the INTP believes to be right or wrong, is something they spend a lot of time figuring out before coming to their final conclusions. This is something which comes from reflection and time spent really trying to be sure of what they believe. INTPs spend so much time and energy analyzing information and ideas, since they want to be sure about things before coming to conclusions. They care about being precise and accurate with everything, which is where their sense of morals often comes from.

The INTPs moral view is often one that focuses on striving to help people whenever they are able. While INTPs might not be emotionally expressive people, they actually do care to help others in whatever way they can. This is often much more practical than it is emotional, as they focus on these types of needs in order to truly make a difference in the lives of others. The INTP tries to use their natural problem solving skills in order to find ways of helping those around them. They believe that if they are able to help someone, they should do what they can in order to make this happen. Even in instances where helping might be difficult, the INTP still believes that they should do their best. They do have boundaries and don’t want to be taken advantage of, but there are times when they ignore those boundaries to help someone who truly needs it.

INTPs also believe that the idea of being free and independent is valuable and important. Freedom is something often connected to their sense of morals, as they feel that people should be free to make their own choices and be their own person. This is something they will fight for, and something they believe to be truly just and right.