INTJ Virtues: The Importance of Inner Morals for the INTJ 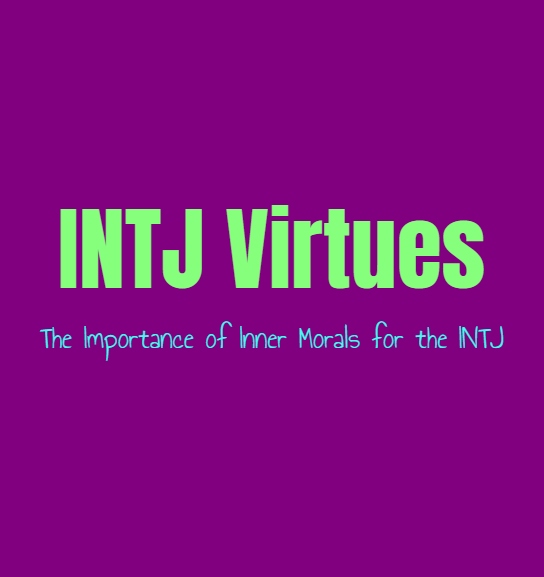 INTJ Virtues: The Importance of Inner Morals for the INTJ

For the INTJ a sense of morals is certainly important, but these are often based on more logical things. They don’t believe in following an inner sense of emotions, instead they based their idea of write and wrong off facts and information. INTJs can be viewed as cold people, but in truth they do possess their own sense of morals and virtue, it just isn’t necessarily what people expect it to be. Just because they aren’t someone who fits into the norm or what is expected of them, doesn’t mean they don’t care and are emotionless people at all. INTJs simply have their own sense and idea of what is right and wrong.

What Being Virtuous Means to the INTJ

To the INTJ being virtuous simply means always striving to do what is right, and not allowing others to sway this decision. For them it means standing up for what they believe in and fighting for what is truly right and honest. They see a virtuous person as brave enough to fight for their beliefs and stand up for injustice in the world. INTJs don’t see it as needing to be based on emotions, but simply based on being brave enough to stand up for what they know to be just and true. Honesty for them is a big part of this, as someone who is dishonest cannot truly be virtuous and moral. INTJs hold honesty as one of the most important values someone can have, and shows that a person can be trusted.

This is why INTJs strive for honesty themselves and don’t like pretending or lying to people. For them being a good person means working hard and providing value to the world around them. This is why INTJs spend so much time trying to spread information and truth to those around them. Being able to make a difference by removing ignorance is something the INTJ values, and for them this is definitely connected to their sense of morals more than people realize. In their minds this is a sign of caring for others and of trying to do something good with their lives which can actually make a difference for the world around them.

INTJs don’t base their morals off of their inner emotions or the emotions of others, not in the way people might expect. This doesn’t mean their feelings cannot be connected to those morals in some ways, they just don’t want them to rule their choices and beliefs. Instead the INTJ wants to be more precise about their choices, and believes in upholding a certain moral code. This code often comes from logic and their intuition as well, and is something they develop over time. INTJs do believe in using information in order to come to these conclusions, and catalog facts and different ideas over time. For the INTJ information is a big part of their lives and so it also connects with their sense of morals and virtues. They believe in being honest and upfront with people, and fighting for what is right.

This is why the INTJs sense of morals simply comes from practicality and logic, rather than emotions. For the INTJ emotions are not as trustworthy and can lead their actions to being more selfish and less reasonable. They see emotions as flighty and this is why they don’t really feel like it is right to base their sense of morals on feelings. This is also why the INTJs moral beliefs are not likely to change often or from moment to moment. The only time they will adjust these beliefs is when they have reflected on it for a long time and have come up with something which is more logical and sensical to them.

They make choices which are much more logical than emotional, but at the same time this is still connected with trying to help people in a positive way. They might not be likely to decide things which are based on how their actions affect someone’s feelings, but rather how it affects their well-being and their future. They believe in ensuring that their actions don’t harm anyone in more logical and practical ways, rather than if it will upset them. While others try to avoid hurting people’s feelings, the INTJ often feels like being honest is far more important and this is what they see as right and good.

INTJs will stand up for what they believe is right, and don’t allow fear or expectations to hold them back. This definitely helps the INTJ to fight for those beliefs instead of allowing what other people feel or want to stand in the way. To some people, the sense of focus the INTJ has can seem a bit emotionless, but for the INTJ it is important to follow their own goals and beliefs instead of allowing them to waver based on others. This is a big reason why the INTJ does not waver in their knowledge and beliefs, since it is something which comes from their own mind and morals and not other people’s.