INFJ Virtues: The Importance of Inner Morals for the INFJ 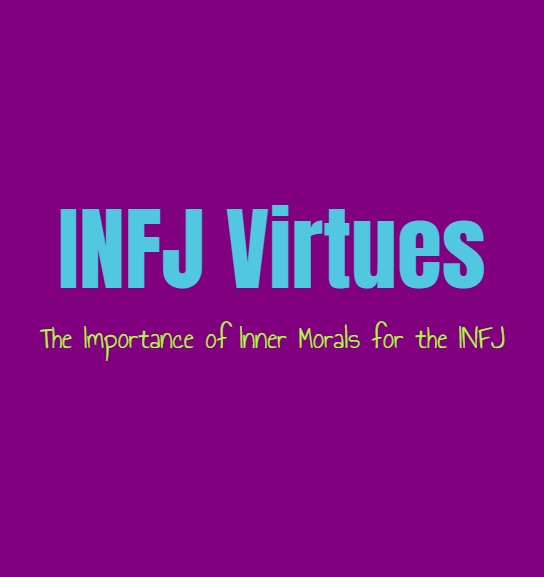 INFJ Virtues: The Importance of Inner Morals for the INFJ

INFJs definitely have strong inner morals, and they value holding onto them no matter what. For the INFJ being honest and good is truly something they aspire to. Even though their values and morals might not be the same as other people, they still have a strong grasp on what they believe is right and wrong. For the INFJ this can get a bit complicated though, and so most people might not fully understand where they obtain their beliefs and why they tend to be more in shades of grey, rather than the more clear black and white views that many other people might possess.

What Being Virtuous Means to the INFJ

For the INFJ being someone who has strong inner morals which they stand by no matter what, is important. They believe it is important to always consider if their actions are right or wrong, rather than simply following whatever feels good to them. INFJs don’t just jump into situations or choices, instead they believe in taking the time to weigh out the ramifications of their actions. To the INFJ a virtuous person is someone who always considers the needs of those around them, and stands up for what they know to be right and good. Someone with these strong morals is going to make the right choices, because they don’t turn their back on what they know is right simply because it could be a difficult path. To them it means sacrificing their own needs at times, instead of doing the thing which might feel good in that moment or make them happy. The INFJ strives to be someone who doesn’t hurt those around them, instead they lift the burdens from the people they love.

For the INFJ being virtuous means always taking a stand against injustice, even if standing up might be frightening. They don’t believe that a virtuous person will allow fear to control their actions, instead they overcome those challenges by standing up for the truth and what is truly just. INFJs often see people as virtuous who are always willing to do what is right and who are fearless in their pursuit of justice and compassion. INFJs often see things differently than the masses, which means they might not consider the same people to be truly moral and virtuous. They look beyond what is on the surface, and often search for what is hidden underneath a person’s outer appearance.

Some of their sense of morals is based on their own inner beliefs, but they are also connected to the people around them. INFJs care about the feelings and happiness of other people, and so this does come into play with their own moral beliefs. INFJs often look to how their actions will affect others in order to decide if they are right or wrong. For some people morals are something which comes only from inside of them, but the INFJ often sees it as more complex than this. Their morals can be dependent on the person and the situation involved, which is much more in shades of grey than it is precise black and white. They weigh each situation out based on their sense of intuition, as well as using their sense of compassion for others. While INFJs believe in standing up for their beliefs, these beliefs do often connect with people and wanting to be sure they are considering their feelings involved in the situation.

Just because the INFJ does not see things as black and white, does not mean their morals are not firm and truly important to them. They believe it is important to care about how their actions affect others, and feel that they should always strive to avoid harming people. For the INFJ a good person is someone who doesn’t seek to harm, but instead seeks to heal those around them. For the INFJ their sense of morals should not solely come from inside, as this can be something which ends up skewed and far too selfish. Instead they want to consider others in their actions and be sure that they see things from every angle. INFJs are good at understanding people and this comes from their strong sense of empathy. In order to make a choice about someone’s actions and intentions, they are capable of seeing things from their point of view. This can be something which confuses others, and makes them feel like the INFJ is unsure of themselves, when it truth it is the opposite. INFJs know that people and situations are more complex than what is seen on the surface, and so they want to be sure they are look at things from the right perspective. INFJs are definitely firm in their own morals and the things which matter most to them, they just don’t always see the world the same as others do. The INFJ has such a complex inner mind and because of this their belief in right and wrong can be different than the norm.