Can You Sometimes Feel Like an Outsider, Based on Your Personality Type 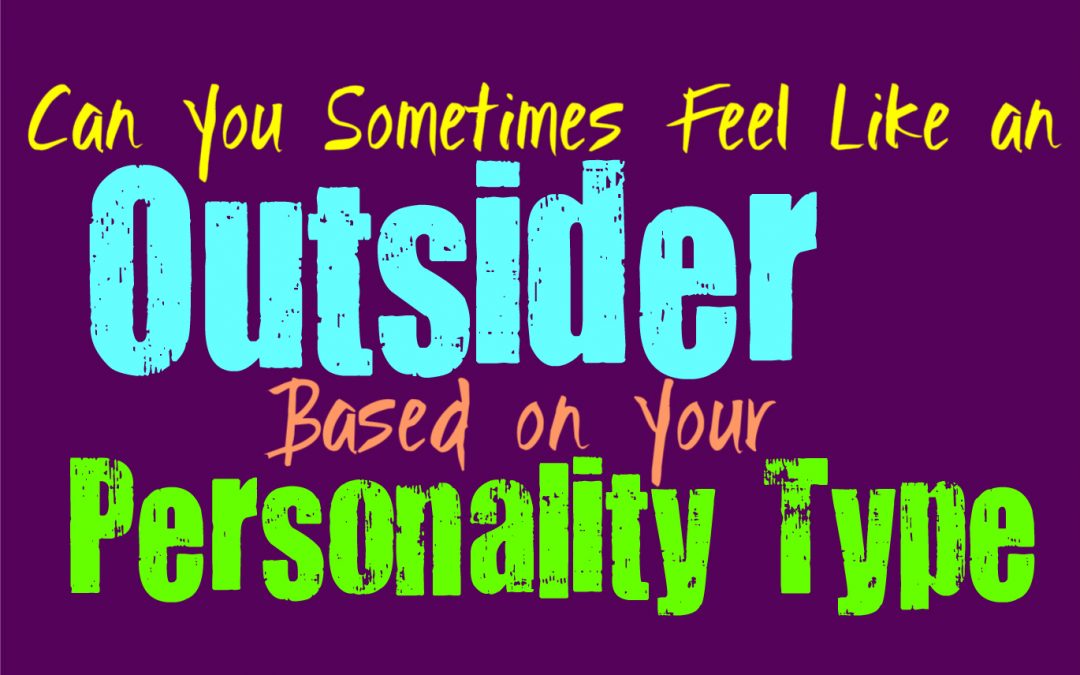 Can You Sometimes Feel Like an Outsider, Based on Your Personality Type

Some people just naturally feel a bit like outsiders when it comes to socializing or being around others. It can be hard to relate for these people, since they feel so much different than the norm. Here is how often you feel like an outsider, based on your personality type.

INFJs do sometimes feel like outsiders, especially when they are younger. The INFJ in high school might feel like a serious outsiders, never really feel connected to others. This is something that can continue as they get older, especially if they don’t find enough people who they can trust enough to let in. INFJs often feel different from others, mostly because they have a unique way of thinking which makes them feel hard to relate to. The best way for INFJs to really find that sense of belonging, they need to open up to someone who they feel they can truly trust.

ENFJs are often good at connecting with people and they can often be rather popular. ENFJs don’t often appear like they are outsiders, but inside they might feel this way. ENFJs can struggle to truly feel understood, even by the people who love them. They are unique people, but at the same time they know how to fit in when they need to. Their inner minds can be rather unique and so it is challenging for them to feel understood, so they often feel like an outsider even if they are relatively popular.

INFPs definitely feel like outsiders, even if they have plenty of friendships. They have a hard time really feeling understood most of the time, so this can cause them to feel like an outsider. INFPs care about feeling connected, but they often want to find people who truly relate to and understand them on a deeper level. They need to feel a special bond and a certain level of trust before they allow themselves to really get close enough to someone to feel connected.

ENFPs are often popular people who have a way of being someone that others truly like. They are charismatic and outgoing, which can certainly getting them invited into the in crowd. While ENFPs are capable of being someone that others enjoy being around, that doesn’t mean they don’t feel like outsiders in some ways. ENFPs might always feel a little bit different, even if this isn’t something they outwardly express to others. They often struggle to feel like people truly understand them and what they are feeling, and so they are usually searching for someone who can help them feel appreciated.

INTJs can sometimes feel like outsiders, simply because they have a hard time relating to most people. INTJs can struggle to really relate to most people and this does sometimes cause them to feel like an outsider in some ways. This doesn’t always bother them that much, since INTJs enjoy being away from others most of the time. They don’t usually feel upset by the fact that they feel different from others, and usually for more comfortable with things being this way. They are willing to wait for people to come around who they can sincerely connect with, instead of pretending to feel close to people they don’t.

ENTJs are often good at fitting in, especially if this is something they want to do. They can connect with a group and are good at finding ways to make their presence known. While there is a part of them that wants to be included, they also sometimes feel a bit different from others. They care about belonging in some ways, but only so that they can get things done and move forward with their lives. ENTJs believe in being efficient and while they care about making connections they are willing to wait patiently for the right people to come along who will make them feel like they belong.

INTPs can often feel like outsiders, even if this isn’t something that is obvious to others. While INTPs are capable of making connections, they can often feel rather different than others. They struggle to feel truly understood most of their lives, and this can cause the INTP to feel like an outsider. They want to find people who appreciate and understand them, and give them a sense of belonging. This is often something the INTP is searching for, even if that isn’t quite obvious.

ENTPs can often connect with others and know how to become rather popular people. This charm and outgoing nature does make it natural for the ENTP to feel included in most situations. While they can become part of most social groups, there is often a part of the ENTP which does feel like an outsider in some ways. They feel this way because they can struggle to really relate to most of society. The ENTP often needs to find people who are similar to them and who think in the unique way that they do.

ISTJs don’t often feel like outsiders, since they are good at fitting into the norm. They simply do their best to get things done and also know how to become included in things. ISTJs are popular people who know how to fit into situations and even blend in when they need to. They enjoy being able to be someone that others depend on, and so they often feel connected to their community. For the ISTJ it is often easy to feel like they are included, and so being an outsider isn’t common for them.

ESTJs don’t often feel like outsiders, they actually strive to avoid this feeling. They want to become valued members of their community and believe in working to feel involved. They don’t like feeling like they aren’t included in things and so they do their best to be someone that is involved and a part of things. ESTJs really aren’t outsiders, they find it easier to connect with people and believe in finding their group or tribe.

ISFJs don’t often feel like outsiders, since they strive to be included and involved. They care about their family and simply want to feel like someone that is important to those around them. ISFJs can easily relate to others. They find it natural to make connections with others and often find themselves included in most things. For the ISFJ feeling like an outsider isn’t something that commonly happens, but if it does it would be truly challenging for them.

ESFJs don’t often feel like outsiders, since they naturally find themselves involved in most things. They can easily connect with people and are very good at empathizing. The ESFJs ability to connect with people and understand them often helps the ESFJ to feel included in most situations. They don’t usually find themselves becoming the outsider, and if they do it definitely is upsetting for them. It is important for the ESFJ to feel close to others, especially their loved ones.

ISTPs don’t mind feeling like outsiders, sometimes they actively search for this. They enjoy being someone who can view things from an outside point of view, instead of being constantly in the middle of it. They enjoy their space and prefer to do things on their own time. ISTPs can become rather annoyed with too much social interaction and so feeling constantly included isn’t necessary for them.

ISFPs are often likable people but they have moments when they can feel like outsiders. They sometimes feel a bit different from others, especially since they have such complex inner emotions. When the ISFP feels like an outsider they often try to hide this from others, struggling to really feel safe enough to express these feelings. ISFPs simply want to find just one person they can feel connected to, who understand them completely.

ESFPs rarely feel like outsiders, since they connect with others so naturally. They are outgoing people who know how to be included in just about anything. They aren’t afraid of being bold and finding ways to connected with others. ESFPs are fun-loving and charming people, which makes it rather rare for them to feel like outsiders. They are often the ones who are the center of attention, drawing everyone into their gravity.