Do You Need to Ease Into Things, Based on Your Personality Type 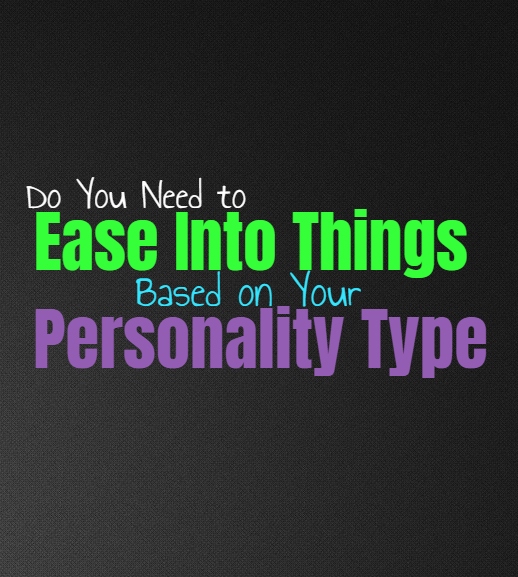 Do You Need to Ease Into Things, Based on Your Personality Type

For some people having something sprung on them can be stressful, and they really prefer the chance to ease into things. They might even be the type of people who need times alone in the mornings, just to have their coffee and ease into being awake. For others it is best to jump in head first and completely immerse themselves into something. Here is how much you need to ease into things, based on your personality type.

INFJs definitely prefer the opportunity to ease into new things, since being tossed into something unaware can be frustrating. They also want to opportunity to really prepare and analyze before being forced to react. INFJs are often the type of people who even like to ease into waking up, and don’t want someone bombarding them with questions and conversation. They are introverts and so they need to gauge their emotional batteries before they have to respond or jump into a situation.

While ENFJs are outgoing and friendly people, there are still situations where they prefer to ease into new things. They want to be prepared for situations because of their perfectionist tendencies. For the ENFJ it is best to ease into something new, so that they don’t become stressed or overwhelming trying to perfect every detail. They might have things they don’t ease into though, like relationships or conversations. For them it entirely depends on the circumstances and what is at risk by just jumping in.

INFPs actually don’t like easing into everything and prefer to have the freedom to just jump. When it comes to certain situations though, they like the chance to adjust but this is usually tied to social settings. When the INFP has to interact with people they do want to ease into this so that they can plan for it and recharge themselves before walking into something which will drain them. When it comes to doing what feels right and follow their hearts, INFPs don’t need to ease into these things and instead prefer to just dive in.

ENFPs really don’t need to ease into most things, instead they enjoy just diving in. They follow their heart and their passions, and want to go with what feels right for them. Because of this desire to go where they feel inspired, and don’t like allowing doubt to hold them back. ENFPs don’t need to prepare for every situation and sometimes being eased into something causes them to lose their patience entirely and become bored of it.

ENTJs don’t really need to ease into social situations, since they are outgoing people who enjoy connecting with others. They sometimes enjoy being put into these situations without having to constantly drag the process out. At the same time, ENTJs don’t like when things are too spontaneous since they do need to plan for them. This is because they often juggle many things at once and need to be able to keep their lives organized. ENTJs are adaptable people who do their best to take on challenges when they aren’t capable of easing into something but they do prefer the opportunity to prepare.

INTPs don’t really need to be eased into most things, instead they enjoy diving in and want to learn everything they can along the way. They are a bit different when it comes to social situations though, and often want time to prepare. Being forced into social interactions when they are already drained, is going to put the INTP in an instantly bad mood. They need time to prepare themselves since they know it likely will be a bit draining for them. With most things though the INTP does enjoy spontaneity, and will be capable of jumping in without having to ease themselves into it.

ENTPs often need things to be a bit more chaotic rather than keeping everything organized. They don’t need to ease into most things, since this process can be boring for them. ENTPs want to be able to dive into something without needing time to always prepare. They want to challenge themselves to these situations, enjoying the chance to adapt to their surroundings without having the chance to prepare beforehand.

ISTJs definitely prefer to ease into things and can become a bit stressed when they don’t have the chance to do this. For them having to just jump into something leaves them unprepared and they do not enjoy this. ISTJs want the time to really analyze and prepare themselves before they have to take on any challenges. They also prefer to ease into most social situations, otherwise they become a bit drained by this. ISTJs can be good at blocking out their surroundings, but they do enjoy being able to prepare for when they have to interact with others besides their immediate household.

When it comes to social situations the ESTJ really does need to ease into them, instead they enjoy diving right in. They are outgoing people who can be extremely chatty and even a bit abrupt at times. They enjoy connecting with others and don’t need time to prepare or ease into those situations. When it comes to work settings they do like to ease into these things, mostly because they want the time to prepare for these challenges so that they can be more efficient and focused on the task at hand.

ISFJs do enjoy easing into most things, since they often have so many things they are trying to get done at once. Surprises or having things sprung on the ISFJ, leaves them feeling even more stressed and on edge. They want to be eased into most things, especially when it comes to bad or stressful news. For them it is easier to prepare for things when they have the time to do this, since they are perfectionists who take on a lot of responsibility themselves. Being tossed into something new just isn’t what the ISFJ wants or enjoy, and so easing in really is good for them.

ESFJs do like to ease into things, and often have a lot they are already trying to work through. They take on a lot of responsibility themselves and care about the wellbeing of those around them. Because of this the ESFJ can be a bit stressed out when they are tossed into a new situation and don’t really have the opportunity to ease into it. While they are outgoing people most ESFJs need time in the morning to ease into the day as well, since they likely have many things to process and prepare for.

ISTPs don’t really need to ease into things, and instead before to dive right in. They become bored when they are asked to ease into something or take their time with the process. ISTPs need to feel excited and enjoy living in the present moment. For them bouncing around and really having the chance to enjoy these excitement of something, is far more rewarding than having time to prepare themselves for the situation.

ESTPs don’t need to ease into most things, instead they enjoy just diving right in. They want to take on these challenges and experience things which excite them. When the ESTP has to take their time on something they can often lose patience and find themselves becoming extremely bored. For the ESTP things need to be a bit more spontaneous and a bit more adventurous in their lives. Most of the time they want to just jump right in, and easing themselves into situations isn’t for them.

ISFPs live very much in the present moment and aren’t naturally inclined to ease into things. This makes it so they don’t really know how to ease others into things either. The ISFP will often deliver news without holding back, and often pull their friends into their adventures without trying to prepare them for it. They are spontaneous people who want to live their lives going after the things which inspire their passionate side.

ESFPs aren’t really interested in having to prepare for everything in life, instead they enjoy diving in. Easing into things can actually be draining for the ESFP, since they find themselves losing interest when anything takes too long. They would rather jump in and follow whatever excites them most. They want to feel a bit rattled and excited by things, since they don’t really care for living a boring life without passion and intensity.