Are You Good at Shifting Attention, Based on Your Personality Type 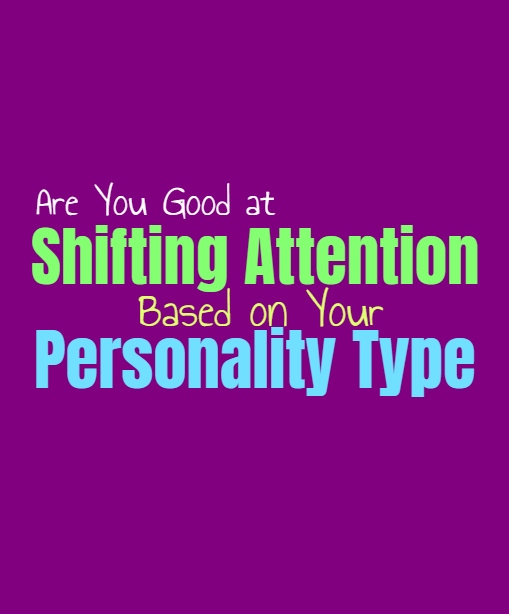 Are You Good at Shifting Attention, Based on Your Personality Type

Some people are naturally good at shifting the attention of others so that it goes in the direction they want. They can create distractions or simply find ways to drawing the attention to themselves. Here is how good you are at shifting attention, based on your personality type.

INFJs are capable of shifting attention if they feel it is important, but for them this is often done in a more subtle way. They might not like drawing this attention to themselves, instead they can point it in a different direction. INFJs are good at understanding people and coming up with ways to shift the attention and figure out what they want from the situation. While INFJs can often do this, they might not like having to shift attention in their own direction or do it in a more over the top manner.

ENFJs know how to shift attention, especially in their own direction. They are good at figuring out ways to deter the attention from one place to another, especially when someone is dragging down the vibe in the environment. ENFJs care about ensuring that things are positive and that their loved ones are happy. If they need to find a way to shift the attention they can fo this by using their natural understanding of others. They figure out what people want and how to really draw their attention.

INFPs do often know how to create distractions and shift attention if this is something they want to do. For them having to draw the attention elsewhere can be a bit draining, unless they feel like they are doing it for a good reason. INFPs do know how to gain attention themselves as well, even though people might not recognize this about them. INFPs are often labelled as typical introverts who want to avoid people, but they do know hot to gain attention from others and be the ones entertaining everyone.

ENFPs are naturals when it comes to shifting attention, especially in their own direction. They can be excellent at entertaining others and really know how to draw people in. They are outgoing and often charming people, which really can draw attention in their direction if they want. When the ENFP doesn’t want something pointed out they are good at finding ways to shift the attention elsewhere without making it all that obvious they are trying to do so.

INTJs don’t really like having to create diversions or shift attention in a certain direction. They become a bit bored with having to navigate people and their desires. This doesn’t mean INTJs are incapable of shifting the attention, since they will often use information and facts in order to do this. They can discuss information for a long time and in great detail, which is something that can help them shift the attention of the room so that people are focused elsewhere.

ENTJs are straightforward and often strong-willed people, which helps them shift attention however they please. If they want to draw attention in a different direction, or simply discuss a different topic, they are often great at doing this. ENTJs can have somewhat larger than life personalities, and so they know how to shift attention. They can even draw the attention in their own directionl, even if some people might not be so pleased about this.

INTPs don’t really like shifting attention, especially not in an obvious manner. If they need to change the subject or shift the attention, they try to be more subtle about this. Having to draw the attention towards themselves can be a bit unnerving for the INTP, since they don’t like feeling obligated to respond or deal with other people for too long. They would rather shift attention from behind the scenes, not from being the center of attention themselves.

ENTPs are great at shifting attention, often by drawing it towards themselves. They are good at being the center of attention, since they are outgoing and often playful people. They have great sense of humor and really enjoy being able to change themselves and figure out if they are capable of shifting the attention around them. ENTPs realize that sometimes this needs to be done when things are going in the wrong direction, and they can be skilled at figuring out how to do this.

ISTJs really don’t care much about shifting attention or trying to gain the attention of others. They can become a bit bored of these types of games or actions, preferring to focus on things which are more practical. ISTJs don’t like having to deal with shifting the attention of others, or even themselves when they are focused on something important. ISTJs would rather focus on getting things done and doing what is personally important to their daily lives and moving towards the future they want.

ESTJs do know how to shift the attention but they often do this in a more direct and even demanding way. They aren’t afraid of gaining attention and of commanding a room if need be. ESTJs would often prefer focus on getting things done and care about tending to the practical things in life. They work hard to accomplish their goals and try their best to ensure they are doing everything efficiently. If there is a situation which calls for shifting the attention of their environment, then they will do what they must to get it done.

ISFJs don’t really care about shifting the attention unless it seems necessary to maintain the harmony in their environment. ISFJs don’t like when the balance is off or when things become negative around them. They do their best to find a way to shift the attention so that things are much more positive and happy for everyone involved. ISFJs really don’t like seeing people upset and they care about ensuring that their environment is positive.

ESFJs care about ensuring that things are positive around them, so they do sometimes want to shift the attention to do this. If things start to get too negative or depressing, they want to find a way to shift this attention in order to make things better. ESFJs work hard to maintain a positive environment because they want to ensure that their loved ones are happy. Sometimes they will maintain the focus though, especially if it seems like something needs to be resolved before the attention is shifted elsewhere.

ISTPs don’t usually care about having to shift the attention of a room, instead they prefer to focus on doing their own things. They are good at drawing attention if they want to though, because they are often charming and laid back people. Most of the time though the idea of shifting attention is a bit draining, since it requires them connecting with people and sometimes putting themselves in the line of attention.
ESTP

ESTPs are good at shifting attention if they want to, since they are often outgoing and charming people. They know how to become the center of attention themselves and do often enjoy this. For the ESTP shifting attention just means finding something more interesting and exciting to entertain people with. They don’t mind doing this, especially if it is also entertaining for the ESTP along the way.

ISFPs don’t really like having to shift the attention, since they prefer to live more in the present and just enjoy things as they come. For the ISFP having to shift the attention elsewhere can actually feel a bit insincere. They will do their best to create distractions if they don’t really want to focus on something negative, since they dislike anything which weighs them down or makes them unhappy.

ESFPs are often good at shifting attention, especially in their own direction. They are outgoing people who enjoy drawing in a crowd and being able to bring people together. ESFPs focus on having a good time and following whatever thing is most exciting for them in the present moment. There are times when they seek to shift the attention of others and even themselves, and this is often natural for them.