INFP Weaknesses, Flaws and Shortcomings: Where the INFPs Feel Challenged 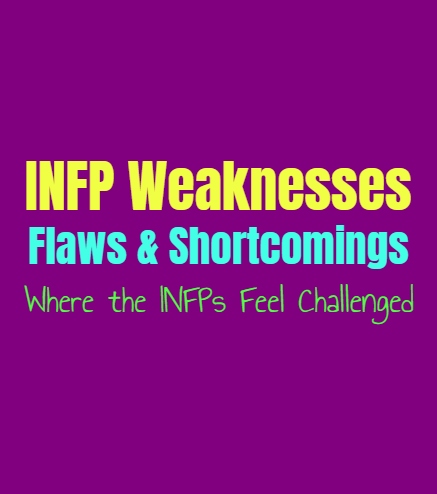 INFP Weaknesses, Flaws and Shortcomings: Where the INFPs Feel Challenged

When it comes to uncovering our weaknesses it can be a bit challenging and sometimes draining. Looking at all of the shortcomings we possess can be something which overwhelms anyone at times, but it can also be useful in finding ways to improve. In other situations it isn’t about finding ways of improving those weaknesses, but instead avoiding the places which will only make us feel emotionally exhausted and like we just don’t belong. For all of us uncovering and accepting these weaknesses can be a difficult process, since it means diving into our own inner feelings and abilities. While it might not always be the easiest of tasks, it can also be a truly important one if we want to grow and learn more about ourselves.

INFPs are often self-aware people and they believe in reflecting and diving into their own emotions and desires. This can make them acutely aware of their own shortcomings, but sometimes accepting them can be difficult. INFPs can sometimes see more flaws in themselves than they actually have though, judging their own actions too harshly and not seeing enough of the positive. Sometimes when they feel challenged and overwhelmed the INFP can blame themselves and feel like they aren’t doing good enough. While knowing their weaknesses is important, they also need to learn that they possess far more strengths which can help them move forward and excel.

When it comes to keeping a specific organization and sense of structure in their lives, INFPs really aren’t fans of this. They prefer to leave things to the last minute and handle their tasks when they are inspired to do so. This can make it difficult for the INFP to deal with mundane daily chores, since they don’t feel at all excited about them. Having to live based on a schedule can be a real challenge for the INFP, and so any job which has strict rules might leave them feeling overwhelmed and challenged in a negative way. They don’t like following this time of structure or schedule, since they prefer to enjoy doing what leaves them feeling truly excited.

INFPs procrastinate often, especially with things they just don’t want to deal with. This can leave them feeling overwhelmed when they have certain tasks that have been left to the very last second to get them done. They might even find that people are pressuring them because of this, and the workplace can become a stressful environment when this happens. While INFPs care about their job and want to take pride in it, they do much better in places which don’t have such strict deadlines and demand a certain type of organization. They need room to make their own choices, as well as opportunities to use their sense of creativity. Keeping with a schedule and showing up to things on time just isn’t one of the INFPs strengths.

When it comes to making casual small-talk the INFP really doesn’t enjoy this and it is certainly not one of their strengths. They become exhausted when they have to talk about pointless things, especially topics which feel completely mundane and boring. When they are in a situation which requires small-talk the INFP might find themselves losing patience. This certainly is not one of their strengths and can sometimes make them feel a bit challenged in certain social situations. While INFPs can be friendly and charming people, having to endure small-talk for the sake of networking can actually be difficult for them at times. They do best moving the conversation towards something a bit more interesting and complex. The subject does not have to be so deep that it scares people away, but even attempting true small-talk is not worth the effort for the INFP, or the people around them.

INFPs can become easily distracted, especially when they are inspired by something. They are deeply passionate people who believe in following their hearts and going after the things that excite them most. When the INFP is being forced to tend to something which bores them, they find themselves drawn in different directions. They don’t always do well when they are obligated to something and can easily become distracted. INFPs can even become distracted from projects they enjoy, since their minds are constantly going in different directions. Since the INFP becomes bored easily, they enjoy being able to explore different ideas and paths, and come back to the old ones after a while.

It isn’t that INFPs are irresponsible or don’t enjoy finishing things, they just find themselves wanting to experience something new and exciting. They follow their hearts which can sometimes lead them in unexpected directions. They want to feel a sense of passion with the things they do, and at times this can make focusing on one thing a bit challenging. INFPs sometimes want to focus in order to get something done, but find that their minds become exhausted when they are stuck on one simple thing for too long. They need to be in an environment which gives them more space to explore, and only pulls them back when it is necessary to do so.

INFPs don’t enjoy confrontation or dealing with negative situations, especially if this can be avoided. While INFPs are capable of speaking up when something is truly important to them, they might let the smaller things slide. They find that they don’t really enjoy confrontation or discord, especially if there are ways in which they can avoid this. They don’t want to upset people and really don’t want to get into arguments with the ones they love. INFPs will often try to smooth things over and avoid a fight when the topic at hand isn’t one that is truly important to them to discuss. This can sometimes be seen as a weakness, since the INFP won’t be the cutthroat person trying to push their way to the top of their career. If they have to get into constant confrontation and arguments to get ahead, the INFP might struggle with this.