Just How Particular You Can Be, Based on Your Personality Type 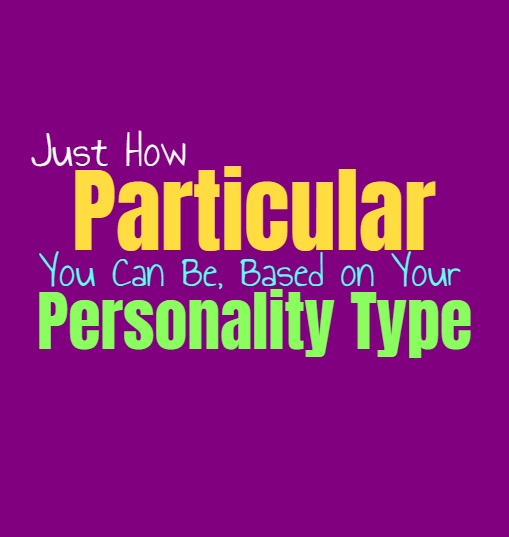 Just How Particular You Can Be, Based on Your Personality Type

Some people are very particular about how they like things and they become upset when people mess with this. They might enjoy having quiet time in the morning, or using a specific coffee mug which is designated to them. These people might enjoy their shelves organized a certain way, or the dishwasher loaded just so. For people who are particular it is important that they have things done to their liking and it can be hard for them to accept anything different. Here is how particular you can be, based on your personality type.

INFJs can certainly be particular, especially about things which are important to them. They can often become used to having things a certain way and don’t really like when these things change. If someone comes in trying to shake things up or change the things the INFJ enjoys having done a certain way, they can become rather anxious. They prefer to be able to maintain these things, and don’t like when someone attempts to take this away from them. While INFJs can certainly be peaceful and compassionate people, they can also be rather particular about certain things in their lives.

ENFJs are often rather particular about things, especially since they are perfectionists. They don’t like having things changed or shaken up too much, since they want to be able to navigate their lives a certain way. ENFJs care about getting things done and about tending to the needs of their loved ones, and because of this they can certainly become particular. ENFJs don’t want someone to mix things up when they have it working a certain way and can become rather annoyed with this. For them it is about being able to take care of others and ensure that they are getting things done efficiently.

INFPs can be particular about certain things, but they do enjoy being able to go with the flow. For them having things shaken up a bit can be more rewarding and exciting than remaining stagnant. INFPs are often capable of enduring change, and even enjoy diving into something new from time to time. They try not to be particular about most things, unless it is about their sense of inner morals and desires. Most of the time though, the INFP does try to avoid being uptight or particular.

ENFPs aren’t all that particular most of the time, since they enjoy being more open-minded. They want to go with the flow and enjoy things as they happen. For the ENFP it is best to be adaptable and to not become stuck on one particular thing. Of course there are certain things which they don’t want changed or messed with, but this doesn’t mean they are particular people. Most of the time ENFPs try to be capable of change and of adapting to different situations.

INTJs are definitely particular people, since they don’t like when people come in and mess up their sense of order. They want things done a certain way and often have their own sense of organization. For the INTJ it is important to remain factual and efficient about everything they do. To others this seems particular but this is often because they know the best way to approach a situation and they also know how they like things done. INTJs often prefer to work alone because of this, becoming annoyed when other people try to mess with their process.

ENTJs can certainly be particular people, which is why they prefer to lead rather than follow. They can become annoyed with people who try to shake things up or force them to change how they do things. ENTJs are focused on being efficient which is why they can be so particular about things. For them it is about being organized and ensuring that they are getting the job done as effectively as possible. When someone messes with this sense of order it becomes rather frustrating for the ENTJ and their process.

INTPs can be particular about certain details and things which are important to them, but they can also be particular about somewhat minor things. They enjoy having space to themselves and don’t like when people do not allow them this. When the things they like having a certain way are changed or shaken up, the INTP can feel like their sense of independence is being invaded or disrupted. Because of this they do seem a bit particular, but this is often because they want to maintain this space and independence.

ENTPs do enjoy going with the flow and being able to adapt to change and new situations. Because of this they often seem much less particular around others than they might actually be. From an outside point of view the ENTP can appear carefree and capable of dealing with pretty much any change which occurs. While ENTPs do enjoy adapting to change and being able to dive into something new, there can still be little things which they are particular about. They need to maintain a sense of independence and control over their own lives and so they can be particular about the things which represent this to them.

ISTJs are certainly particular people, who like having things done a certain way. When things are mixed up without their consent or prior knowledge, the ISTJ will become annoyed. They like having things done a certain way because they are organized people who want to be able to get things done efficiently. They often prefer to be on their own so that they don’t have to deal with people messing with their sense of structure and focus. ISTJs are particular because they know how they want things done and they don’t want people to prevent this from happening.

ESTJs are certainly particular people, since they enjoy having things done a certain way. They don’t like when people mix things up or change them, especially without them being prepared for it. ESTJs do their best to keep things organized and to maintain the way they want things done. Efficiency is deeply important for the ESTJ, and so this causes them to feel particular about how things should be done in their lives. When someone stands in their way or shakes this up, they become frustrated.

ISFJs can be rather particular people since they are naturally perfectionists. They enjoy having things done a certain way because they want to be sure they don’t make any mistakes. ISFJs care about their loved ones and want to be capable of taking care of them. While they want to be able to care for those around them and make them happy, this often means having to juggle many things at once. When the ISFJ is juggling various tasks and chores, they often need things done a certain way so that nothings goes wrong. Because of this ISFJs can be particular people, not enjoying when things are shaken up too much.

ESFJs are a bit particular and enjoy having things done a certain way. When these things are changed or adjusted they can become a bit annoyed. ESFJs want to have things organized and maintained in their lives, so that they can ensure they have taken care of their tasks and loved ones properly. Because ESFJs are perfectionists and want to be able to take care of everyone around them, they can be very particular about how they want things done.

ISTPs aren’t usually particular people, especially when it comes to how they want things done. They prefer to be a bit more flexible and want to enjoy living in the moment. The only time ISTPs might be a bit particular, is when they are being factual and direct. When someone is spreading inaccurate information the ISTP can be a bit more particular. Most of the time ISTPs enjoy going with the flow and just allowing themselves to live in the present.

ESTPs live very much in the present and try to be more open-minded about things. Most of the time they are capable of living in the moment and just enjoying things as they come. There are times when ESTPs can be more particular about how they want things done, but they try to keep this separate from those around them. ESTPs don’t really want others to view them as particular, since they want to maintain a more free-spirited and flexible image.

ISFPs aren’t usually particular about most things, instead they enjoy living in the moment. They are often free-spirits who don’t like being uptight about their choices or lives. ISFPs enjoy soaking up their surroundings and trying to enjoy things as they come. They are capable of accepting change and new experiences, and try hard not to let themselves become too bothered when things are shaken up.

ESFPs aren’t particular about most things since they enjoy experiencing a bit of change. ESFPs want to feel free to dive into new things and want to be open to what might happen. They live in the present moment and are often rather free-spirited people. ESFPs don’t usually find themselves feeling all that particular about things, unless there is something they have their hearts set on. When they are really focused on doing something they do become a bit obsessive about how it is done, but most of the time they can be open to change.