Do You Have a Tendency to Give the Silent Treatment, Based on Your Personality Type 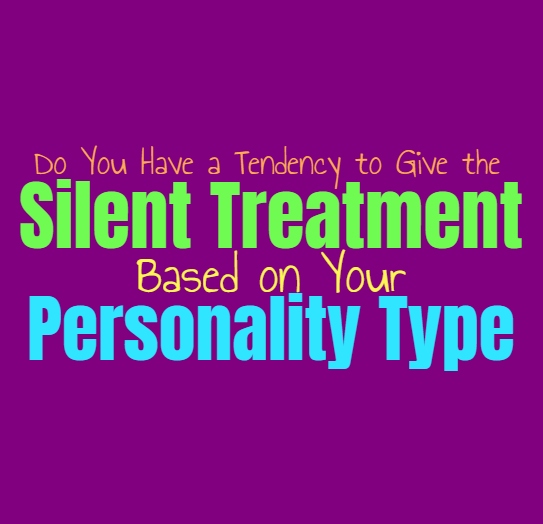 Do You Have a Tendency to Give the Silent Treatment, Based on Your Personality Type

Some people are great at giving the silent treatment when they are mad or upset, while others find it difficult to keep things in. For some people this is how they express that they are frustrated, since they aren’t necessarily great at expressing it outwardly. Here is how likely you are to give the silent treatment, based on your personality type.

INFJs certainly can give the silent treatment when they are angry and upset. They are often good at shutting down and just retreating inward so that they don’t have to deal with the discord. Sometimes the silent treatment is done intentionally to let someone know they are upset, other times it is simply because the INFJ really needs space and time to recharge. Often when they are overwhelmed they need time to themselves in order to regain their energy and really process everything they are thinking and feeling.

ENFJs do sometimes give the silent treatment, but it can be hard for them to maintain this for too long. At first they find themselves wanting to be away from this person and just find a way to process their thoughts and feelings. They want to be able to make it clear they are upset and sometimes just giving the silent treatment is their best approach. While they do often begin things this way, it can be difficult for the ENFJ to maintain this for too long and eventually they find themselves needing to speak about things.

ENFPs can give the silent treatment but usually this is done intentionally to frustrate someone. Most of the time they prefer to talk things out, even if they discuss it in a passive aggressive manner. They can certainly give silent treatment to someone they simply don’t want to speak to anymore, but this usually happens when they are finished with this relationship and don’t have anything left to say. For the most part ENFPs prefer to talk things out or atleast express that they are upset.

ENTJs usually like to solve their problems and express their boundaries and needs clearly. While the do their best to make things known, they aren’t great at understanding their emotions. Because of this the ENTJ struggles to really process emotions and so they might resort to the silent treatment when they aren’t sure how to express their frustrations or hurt. Sometimes time apart to process their thoughts and be alone is what the ENTJ needs in order to really find a way to solve the problem.

ENTPs don’t usually give the silent treatment since they prefer to discuss things and analyze them. It is better for them to express that they are frustrated, even if they don’t fully understand their emotions they want to try. ENTPs might give the silent treatment when they are incapable of getting someone’s attention any other way. This isn’t how they prefer to deal with things but it is often used as a last resort when nothing else seems to really work.

ISTJs certainly can give the silent treatment when they are angry or upset with someone. They aren’t really focused on constantly expressing themselves or needing to talk things through, and so sometimes the cold shoulder is the best way for them to make their feelings known. ISTJs do sometimes do this simply for the time alone to process things, but often they want to be able to make it clear that they are frustrated with someone and need that person to try and talk things out.

ISFJs do sometimes give their own form the silent treatment when they are truly upset with someone. They don’t like creating discord and would rather try and move past the situation, but this can be challenging for them to just ignore. Their attempts to bury their feelings often leads to the ISFJ giving this person the silent treatment and really just expressing themselves in a much more passive aggressive manner.

ESFJs do sometimes give the silent treatment, especially when they are really mad or upset. When they don’t really want to fight about something but are deeply hurt, they might resort to more passive aggressive behaviors. They might find that they need to give the cold shoulder instead of expressing that they are upset, especially if they feel like this is the only way to grab someone’s attention. ESFJs would rather find a way to work things out but sometimes the silent treatment is the only way they can really make their feelings clear.

ISTPs might give the silent treatment but this is mostly done because they need time to themselves to process things. They try their best to avoid letting their feelings take control, but this can cause them to be a bit passive aggressive with how they express themselves. ISTPs do want to find a way to express when they are angry with someone, but sometimes it can be hard for them to really be open about these things.

ESTPs do sometimes give the silent treatment but this usually only happens when they are very furious with someone and don’t want to make the first move. Most of the time ESTPs prefer to express when they are angry or upset in hopes of working things through. They don’t like feeling distant from the people they love and so they want to be able to discuss what they are feeling in hopes of making the situation better.

ISFPs are capable of giving the silent treatment but usually they prefer to express what they are feeling. They want to be able to work through things instead of just pretending like everything is fine. It is difficult for the ISFP to simply bury their emotions and give someone the cold shoulder, instead of openly telling them how they feel. ISFPs don’t usually give the silent treatment to someone they care for, instead they let them know that they are angry or upset.

ESFPs prefer to be open with their feelings, and believe in expressing themselves when they are upset. ESFPs don’t like burying things and prefer to express themselves, especially to the ones they love. When they are angry or upset they often make this clear, instead of simply finding ways to give someone the silent treatment. If they dude use the cold shoulder to express themselves, this often only lasts for so long before they need to speak up.