Can You Handle No Strings Attached Relationships, Based on Your Personality Type 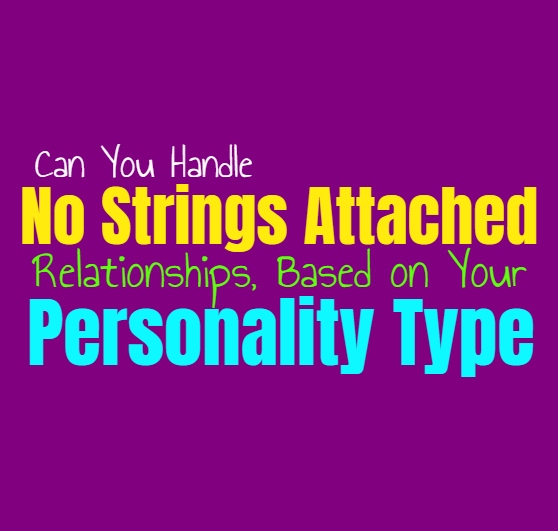 Can You Handle No Strings Attached Relationships, Based on Your Personality Type

Some people can handle having a connection which doesn’t involve strings or rules, while for others this can feel void and immoral. Everyone has different views and desires in life, and so they want different things from their relationships. Here is how well you handle no strings attached connections, based on your personality type.

INFJs are often curious people who are capable of exploring different life choices, but ultimately no strings attached really isn’t right for them. It can become draining for the INFJ to experience a relationship without some sort strings, since they believe in focusing on depth and meaning. Anything lacking connection at all often lacks sincerity and a sense of meaning, and this is something that is completely draining for the INFJ. They need their relationships to hold something more valuable than just a shallow connection, and so no strings attached usually lacks certain elements which matter to them.

ENFJs aren’t usually fans of shallow connections, and so no strings attached isn’t often appealing for them. They might be able to try something like this, especially if it is with someone they are naturally drawn to. But for the ENFJ these types of relationships can become rather draining for them, especially after a while. They can become hurt with this lack of commitment and meaning to their relationship, and it often leaves the ENFJ feeling empty and confused. They care about making bonds which will last and for them the strings are actually rather valuable.

INFPs are often more capable of trying new experiences and putting themselves into different situations. They might find themselves trying out a relationship which has no strings attached, since there can be an appeal to the freedom of it. Ultimately if there isn’t any true meaning and connection behind this, they will become drained by it. INFPs need relationships which have depth and meaning, and not just a completely shallow connection. If they can somehow find meaning underneath the no strings attached relationship, then they are more likely to handle it.

ENFPs aren’t really fans of anything which lacks meaning and sincerity, and so no strings attached isn’t as appealing to them as it might seem. At first they can find themselves pulled into these types of things, since it can sound more enjoyable than it actually is. They can find themselves intrigued by the idea of no rules and complete freedom, but in the end the lack of meaningful and lasting connection can be deeply upsetting for the ENFP. They are more likely to explore this options when they are younger but then find themselves not wanting this later on in life.

INTJs aren’t actually drawn to no strings attached relationships, since these things often feel completely fruitless. INTJs don’t like wasting wasting their time around people who aren’t committing to them or their connection. They would rather focus on building something real, something which holds value and growth. For the INTJ no strings attached really isn’t that rewarding, and often feels like a complete waste of their time. While there are some INTJs who might prefer a relationship which doesn’t hold them back, something without strings usually isn’t rewarding for them.

ENTJs aren’t fans of anything without strings or true connections, since they prefer to focus on building something lasting. They actually believe that commitment is important and valuable, and for them something without strings usually isn’t worth their energy. ENTJs prefer to focus on making connections which are going to last, and want to find people who they can actually spend their lives with. For the ENTJ no strings attached isn’t some appealing option, especially not when they are ready to settle down.

INTPs might be drawn to having freedoms and the ability to make their own choices in life. For them the idea of no strings attached has some appeal, since it would give them space instead of constantly feeling like someone is hovering. While they might be drawn to that idea, INTPs are rarely rewarded by no strings attached relationships. After a while they can become drained by this time of connection, since it doesn’t provide them with a bond that they can actually hold onto.

ENTPs might initially be interested in a relationship which has no strings attached, simply because they want some sort of freedom. This can seem appealing because of they won’t feel smothered and overwhelmed by the relationship since they aren’t obligated. The sense of freedom and lack of rules can be something that the ENTP is interested in when they’re younger. They will likely feel differently when they are ready to settle down, or when they have found someone special who they want a more committed connection with.

ISTJs are rarely interested in no strings attached, quite the opposite actually. They want to focus on making lasting connections and believe it is important to make a real commitment. For the ISTJ no strings attached comes from people who don’t really care about others and are just messing out. ISTJs believe in building connections which will last and want to find someone they can spend their lives with.

ESTJs rarely have any interest in no strings attached relationships, since it feels pointless to them. They believe in creating connections with people which will last, and want to find someone they can actually share their lives with. For the ESTJ no strings attached feels like a waste of their time and energy. They want to create something valuable and something which they know is building on their positive future.

ISFJs care about making lasting bonds and so for them no strings attached feels completely pointless. They don’t want to waste their time with someone who is not willing to commit to them and their relationship. ISFJs aren’t really interested in no strings attached or something that lacks any real commitment and bond. This feels a bit shallow for them and doesn’t really help them build a future that they want.

ESFJs care deeply about commitment and being connected to someone they care about. For them no strings attached is a bit pointless and even upsetting for them. They want to find someone they can create a lasting relationship with and for them no strings attached is simply a waste of their time. They don’t like putting themselves in situations with people who aren’t going to stand by them, and so this just isn’t their style.

ISTPs might be okay with no strings attached relationships, especially when they are younger. They might be drawn to this because it gives them space and freedom without feeling constantly obligated to someone else. They can still feel close to someone without having to obey all of their rules and sometimes feel like they are being smothered by this relationship. While ISTPs might not want this forever, it might be something they are capable of managing when they are younger.

ESTPs might be able to handle a no strings attached relationship, since they do enjoy having a sense of freedom. Having a relationship where they don’t have to constantly answer to someone else or feel obligated to them, can be enjoyable for a while. ESTPs do like having a sense of freedom and want to be able to change their minds about things without feeling guilty about it. No strings attached can provide them with this sense of freedom and gives them a chance to make their own choices.

ISFPs don’t mind no strings attached relationships sometimes, since they enjoy being able to experience new things. Sometimes for them it can be rewarding to take chances and connect with someone without feeling constantly obligated to them. This isn’t necessarily something the ISFP wants to experience forever, since they are often on the hunt for someone they can share their lives with and feel always close to.

ESFPs might be capable of giving a no strings attached relationship a chance, especially when they are younger. For them it can be fun to experience something without constant rules or demands on them. They like being able to try new things and don’t want to feel like someone is holding them down or hovering over them constantly. The sense of freedom can be enjoyable but most of the time ESFPs reach a point where they want something more substancial.