Are You Any Good at Improvising, Based on Your Personality Type 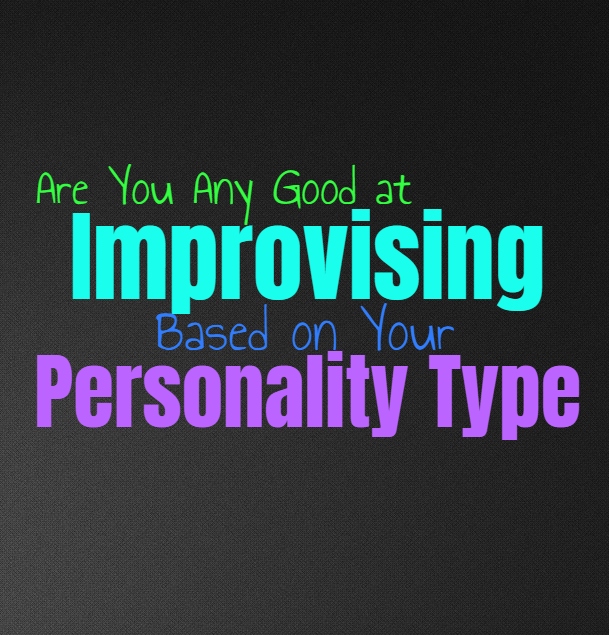 Are You Any Good at Improvising, Based on Your Personality Type

Some people are skilled at improvising in the moment instead of needing to have everything planned out. This can be truly useful in situations where things don’t go as expected and someone is needed to step in and problem solve. Here is how good you are at improvising, based on your personality type.

INFJs are more focused on planning things out and following through with these plans. They don’t like simply having to improvise and figure things out last minute. Sometimes this can be a bit stressful for them, and they can feel like they might fail because of it. INFJs like to be able to prepare for things and sometimes having to improvise can leave them feeling a bit more vulnerable than they are comfortable with. It does not give them a chance to revise and ensure they are doing something perfectly, which is not something the INFJ is likely to be happy with.

ENFJs really don’t like having to improvise, since they prefer being able to plan things out. For them it can be stressful if they have to improvise, since this can lead to making mistakes. They can be perfectionists and don’t want to feel like they have failed in any way. When the ENFJ has to improvise it means things did not go as planned, but they will do their best to focus and get the job done anyways. While having to improvise can be a bit unnerving, the ENFJ will do their absolute best to make it work.

INFPs actually do enjoy improvisation sometimes, since they don’t want everything in their lives to be planned and scheduled. For them it can be rewarding to be able to improvise in the moment and figure out a new way to experience the situation. INFPs have creative minds and this does help them find ways to improvise without allowing the stress of the situation to overwhelm them. The shy INFP might struggle with this though, feeling afraid of being judged. Most of the time INFPs are capable of being vulnerable and enjoy being able to experience what feels right for them.

ENFPs are creative people and so this often helps them to improvise even in situations where others would be stressed. They like to focus on exploring their options and find ways to really challenge themselves. Sometimes having to improvise in the moment can actually be a great way for them to see how they function in these situations, and they don’t mind exploring this for themselves. ENFPs are usually very capable when it comes to improvisation, and can figure out ways to make the situation work.

INTJs are often planners who believe in being able to prepare for every situation. They do try to find ways to be ready for anything, even the different potential outcomes they wouldn’t normally expect. Since they believe in always being prepared, having to improvise isn’t really something they are going to be happy about. INTJs aren’t likely to let themselves become stressed or emotional if they are forced to improvise, but this isn’t something they want to let happen. They prefer to get things right the first time around, and so having to improvise can feel like a failure in some ways.

ENTJs don’t like improvising but that doesn’t mean they are not capable of it. They believe in always being prepared, but they also value efficiency and being able to really step up. When something changes and the ENTJ needs to improvise, they will try and focus on everything they know and use their knowledge to make the situation work. Their sense of improvisation is more about using the facts they have stored and methods they have seen work, in order to adapt to the situation the best way possible.

INTPs are definitely good at improvising in most situation, and actually enjoy being able to take on this challenge. They do spend a lot of time considering the many possible outcomes which could occur, and this helps them adapt when things don’t go as expected. They are rather creative people and this really helps the INTP when they need to improvise in an unplanned situation. They can find different ways to adjust and are willing to give it a try even if it seems a bit stressful.

ENTPs are often great at improvising, and enjoy being able to challenge themselves in these situations. They do their best to figure out new and creative ways to adjust, even when others seem a bit overwhelmed. ENTPs are willing to make mistakes, as long as they can learn from the experience and figure out ways to grow. They want to be able to dive into something without being constantly afraid, and so for them improvising is a useful and important skill.

ISTJs don’t really like having to improvise, since they believe in having things planned out accordingly. Having to improvise often means something has gone wrong, and this is likely to be rather stressful for the ISTJ. They want to focus on being as efficient as possible, and so if they are required to adapt and improvise they will do their best. Having to adjust to situations is something which will make the ISTJ uneasy, but they will do their best to suck it up.

ESTJs are very efficient and driven people, and so they don’t like making mistakes. Having to improvise often means something hasn’t quite gone as planned, and this can be a bit annoying for them. They would rather get things right the first time around, rather than have to worry about adapting when things go south on them. The ESTJ will do their best to adapt and ensure that they can improvise when they have to, but this isn’t something they often prepare for or are comfortable with.

ISFJs don’t like having to improvise simply because they want to be able to get things right the first time around. They are naturally planners, and so they want things to run smoothly without having to adjust or adapt to any failures. If the ISFJ must improvise they will try their best and push themselves, especially for the sake of their loved ones. Most of the time this can leave them feeling a bit too vulnerable though, and it isn’t something they enjoy experiencing.

ESFJs often do their best to improvise when things don’t go as expected, but this is often because they are used to juggling so many things at once. The fact that they are adjusted to having to handle too much, does actually help them when it comes to improvising. Most of the time though, the ESFJ is mentally prepared for these situations and has a lot of things already planned out in their minds if the situation does not go as expected. This isn’t as much improvising as it is being overly prepared for just about every potential failure.

ISTPs do enjoy improvising often more than they do planning things out. They don’t like feeling like they have to prepare for everything and become more stressed by this than anything else. For the ISTP it is enjoyable to improvise and figure out how to adapt to the moment. If something goes wrong the ISTP will use their sense of creativity and problem solving skills in order to find the most logical approach.

ESTPs are often good at improvising with situations, especially when they are trying to really enjoy themselves. They don’t like having to prepare for everything and would much rather adjust and figure out how to solve the problem in the moment. They don’t obsess over which things might go wrong most of the time, instead they just figure out how to make it right when things don’t necessarily happen as they would have hoped.

ISFPs are often good at improvising in most situations, since they enjoy living in the present. When something does not go as expected the ISFP is more than willing to adjust and adapt to whatever is going on. They sometimes enjoy being able to experience something new and test their ability to improvise. They might even enjoy being in situations where they have express their creativity in an improv setting.

ESFPs are often great at improvising and adjusting to something unexpected. They don’t like having to plan for everything and are good at following whatever inspires them most. ESFPs can easily adjust and adapt, using their creative and active minds to figure out their next step. They might not do everything perfectly, but they prefer to live their lives in the moment and so for them improvisation can be rewarding.