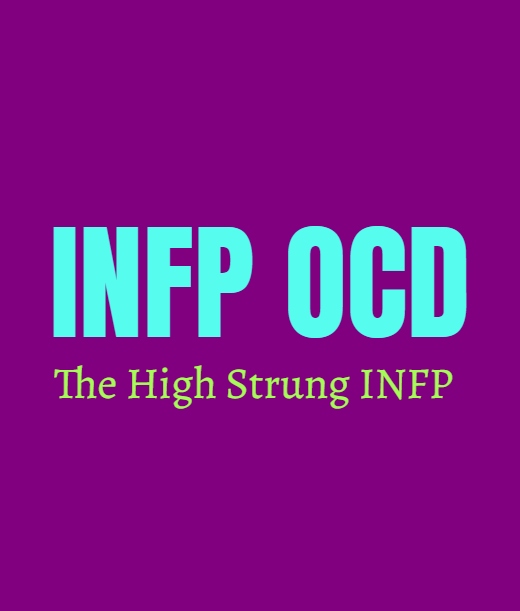 For the INFP it is can be easy to exhibit obsessive behaviors, especially since they have a natural tendency to overthink things. Their minds can become so wrapped up in their inner thoughts and analysis, that they lose sight of what matters to them. This is something which can happen to the INFP under extreme stress, but there are instances when they find themselves slipping into this because they spend too much time being sheltered. Being distanced from people can make it harder for them to connect with a sense of reality at times, and so they idealize things to the point where they become high strung and stressed.

For the INFP signs of being obsessive compulsive often show up when they are putting too much stress on their extraverted thinking. When they become caught up in this inferior function, the INFP loses sight of what truly matters to them. They start to analyze even the smallest of details, and don’t really know how to stop themselves. They continue to overthink things to the point where everything seems inefficient and imperfect. They can even second guess relationships or people they are interested in, and this can cause them to miss out on connected with people even when they want to. They find themselves struggling to act on feelings, since they are so focused on analyzing the details in behavior. When someone shows affection towards the INFP, they might overthink this in hopes of figuring out the intentions behind it. Instead of following their own desires and feelings, they try to be sure each choice is the right one and won’t allow them to take unnecessary risks. It can be difficult for them to let go of these thoughts when their Te has become overused and is taking control in their lives. This happens when the INFP is in their shadow, and this can be something which causes them serious stress. While INFPs are naturally overthinkers, that doesn’t mean it prevents them from following the strong morals and ideals they already have.

When the INFP deals with these feelings they often withdraw themselves from others, not wanting to interact or feel like they are being judged by them. Since they cannot seem the find the ideal they so desperately want, they instead seclude themselves. The INFP might feel like they cannot live up to their own potential and inner expectations, and so they distance themselves. This puts them into a shell and causes the INFP to feel overwhelmed by anything new or risky. Instead of taking chances and going after what they want, they become closed off and internalize everything. This is something which happens when the INFP is under extreme stress, but it can be hard to break away from these patterns even after the stress calms down. The INFP might seek to focus on things they know they can control, so that they don’t have to deal with disappointment and doubts. It can often stem from a fear of failure, and the INFP feels like there is no way they can achieve those ideals and the things they find most valuable and important.

For the INFP their Fi is often the guide which helps them to overcome overthinking and break free from these obsessive behaviors. They need to tap into these inner morals and emotions, as they are what guides them towards making the right decisions. INFPs judge their choices based on their Fi, and this is what helps them decide the difference between right and wrong. INFPs often need someone who will take control of the menial tasks and chores, so that they can break away from those patterns which keep them trapped inside of their habits. They might need someone around them who can help the INFP break out of their obsessive behaviors and bring them into something new. Having a loved ones who can help inspire the INFP and force them to step outside of their comfort zone, can really be helpful. It isn’t always easy, but they need someone who can give them a new perspective so they don’t feel so stuck.

INFPs really need to find a way to break out of the patterns which are keeping them trapped. They overthink because they are forced out of their natural Fi, and into their inferior Te. With people around them to break those habits the INFP can start to gain more clarity. Getting a glimpse of how things are supposed to be, can help them escape that trapped feeling which forces them into their overthinking and obsessive behaviors. INFPs are always going to overthink to some extent, but they are not naturally incapable of taking action. Instead they use their more natural functions to help them decide which choice is right for them, and to explore the world around them with a more open mind.