Do You Ever Feeling Like Running Away, According to Your Personality Type 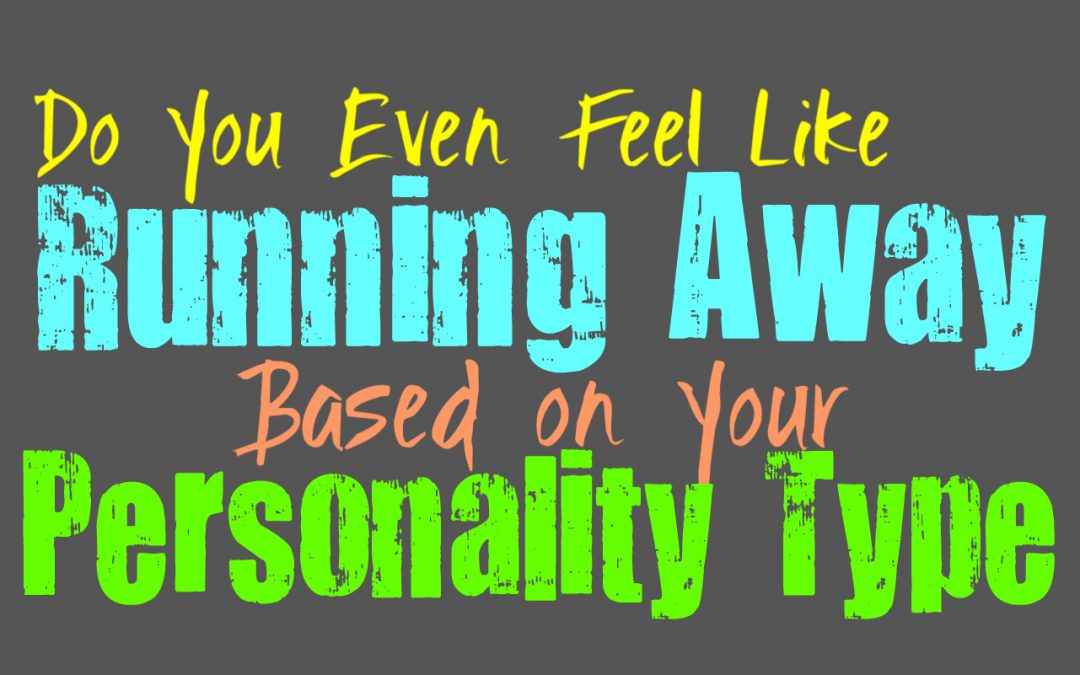 Do You Ever Feeling Like Running Away, According to Your Personality Type

Most people have moments where the stress and obligations of life are too much, and they just feel like running away and starting fresh. Well here is how often you get this feeling of wanting to run away, based on your personality type.

INFJs are often seen as dependable people, but there is a big part of them that might want to run away from their lives. They usually won’t share this with others because they won’t want to hurt them. For the INFJ it can be challenging to live a typical lifestyle, especially if they feel trapped. When they start to get a bit down on themselves and feel like they are failing they will feel like they want to run away and start over completely. This is often something they think about or feel internally, but that doesn’t mean it is something they will actually do.

ENFJs are responsible people who strive to take care of their loved ones, but there can be a bit of a wanderlust inside of them. Part of them might feel overwhelmed by their lives and sometimes dream of running away. It can feel romantic to think about having someone who will show up and take them away, giving them a chance to start over. Most ENFJs can feel guilty about this fantasy, since they don’t want to do anything that might hurt their loved ones. Deep down this isn’t about hurting anyone, their desire to run away is more about escaping the pressures of their lives.

INFPs often fantasize about running away, and imagine what it might be like to escape. They might romanticize the thought of having someone show up and take them away from their current lives. They have vivid imaginations and often desire the ability to experience new things. The more curious side of the INFP can certainly feel like running away, sometimes just because it seems a bit more exciting. If the INFP feels trapped in their jobs or their lifestyles, they will certainly idealize the thought of running away and escaping everything.

ENFPs definitely fantasize about running away, and might even go through with it. They become bored if their lives become too stagnant and so they will want to search out new experiences. If the ENFP feels like they are stuck in their current situation and things are just pulling them down, they will want to find a way to escape. They often envision what it would be like to run away and completely start over. Some ENFPs end up following through with this desire, since they can be a bit spontaneous in their decision making.

INTJs don’t often consider the thought of running away, since this can seem a bit like giving up. For them it is important to work hard and improve the things in their lives that they aren’t satisfied with. They don’t believe in just searching for a way to escape, this lack of commitment often feels like cowardice to them. If the INTJ truly wants to escape their lives and start over somewhere else, this isn’t something they decide to do on a whim. They will consider their options and decide if they are making the right choice before moving forward with it.

ENTJs don’t usually imagine running away, since they feel like this is giving up. They don’t believe in just throwing away their accomplishments in order to start over somewhere else. ENTJs work hard to achieve their goals and if something isn’t quite working they will just do their best to improve it. For them it often feels like cowardice to run away, since they believe in facing their problems with a sense of strength and determination.

INTPs can definitely imagine what it might be like to run away and start fresh somewhere new. They enjoy being able to experience different things and so they might be curious what life would be like somewhere else. For the INTP it is often their curiosity that makes them desire something like this, and their inner mind considering what their other options are. They want to find out what other places might be like, and what others lifestyles might be more rewarding for them.

ENTPs definitely consider what running away might feel like, so much so that they might actually follow through with it. They want to experience different things in life and so they dislike feeling stagnant or trapped in one place. If their lives aren’t really fulfilling them the way they want, the ENTP might consider running away and starting fresh. ENTPs can get caught up in this feeling that they are missing out on something, and so this can make them want to run away and completely start over.

Running away isn’t something most ISTJs desire, since they prefer a sense of stability. They believe in working hard to improve their lives and carve out something they can be proud of. For them the feeling of running away can seem a bit like cowardice, since it means giving up on your current responsibilities. They enjoy having structure and comfort in their lives, and they actually feel proud of their ability to be someone others can depend on.

ESTJs don’t usually want to run away from their lives, unless there is something truly bad happening to them. Most of the time the ESTJs goals are to build a life and put down some roots with their loved ones. They value being someone that others can rely on, and to them commitment is a truly important part of life. They don’t often feel a desire to just drop everything and run away, instead they want to be able to make things work where they are.

ISFJs don’t often imagine running away, instead they value setting down roots and making a life for themselves. They believe in committing to something and to someone, and they don’t take this lightly. For the ISFJ running away can feel a bit like giving up and being selfish, and that just isn’t who they are. They value people who are capable of making their lives work, and actually enjoy a strong sense of stability and commitment.

ESFJs don’t usually dream of running away, unless their lives are overwhelming them in some ways. If they feel like things just aren’t working out in their lives, it will cause them to feel like running away and escaping. While they might fantasize about this, they usually won’t go through with it. ESFJs don’t want to let down their loved ones, and so running away can feel like giving up on them and betraying their relationships. If the ESFJ does want to run away, it often means there is a lot going wrong and they already feel like they are failing in some ways.

ISTPs might imagine what it would feel like to run away and start fresh, so much so that they might even go through with it. For the ISTP it can be rather miserable if they feel trapped in their lives. They will want to escape and experience new things in life, and to them it doesn’t really feel like running away. ISTPs want to dive into new things and go after whatever feels right, which is often why they avoid setting down too many roots.

ESTPs do sometimes feel like running away, especially if they feel overwhelmed by something. When they are strong disappointed by their current situation, they might want to pick up and run away. For the ESTP starting fresh can feel more rewarding than it does frightening. They want to be able to experience new things and really dive into different opportunities. For the ESTP feeling stagnant is miserable, but being able to take chances can be truly rewarding.

ISFPs do sometimes fantasize about running away and experiencing new things and opportunities. They might romanticize the thought of having someone show up and take them away from their lives. ISFPs dream about far off places and sometimes experience quite the wanderlust inside of them. They want to be able to live their lives with a sense of passion and even adventure, so they certainly do consider what it might be like to run away and start over.

ESFPs definitely dream about what running away might feel like, and if it is the right choice for them. The more stagnant they feel in their current situation, the more the ESFP will romanticize running away and starting fresh. ESFPs are passionate people who want to experience romance and adventure in their lives. Sometimes the thought of running away to some new place and starting completely new, can be invigorating for them.