Just How Easily Flustered You Are, Based on Your Personality Type 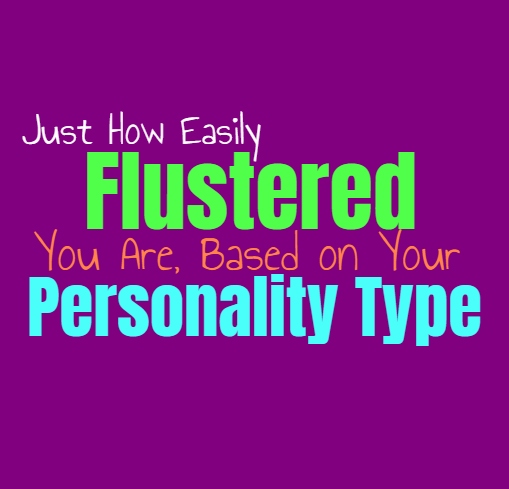 Just How Easily Flustered You Are, Based on Your Personality Type

Some people are easily flustered and shaken up by things, while others find themselves standing firm even when the situation is a bit unnerving. Here is how easily you become flustered, based on your personality type.

INFJs can become flustered in certain situations, especially when they are around people who make them feel this way. INFJs who might have a crush on someone or strong feelings for a person, do become a bit flustered around them when they are first getting to know one another. It is often these feelings towards someone which causes them to feel flustered more than anything else. INFJs have complex inner minds and feelings, and so there are certain responses and situations which can fluster them a bit, although they will try not to show it.

INFPs do have strong inner emotions, and so sometimes this causes them to become a bit flustered. They follow these inner emotions and that can lead them into situations where they feel a bit overpowered by them. INFPs can become flustered when they are around someone they have feelings for, especially if they haven’t expresses these feelings yet. INFPs don’t intend to show that they are flustered, but it is hard for them to really conceal their feelings. It just isn’t natural for the INFP to cover up what they are feeling, since they follow their hearts.

ENFPs do become a bit flustered when their emotions take over, especially when they are around someone they have serious feelings for. ENFPs try not to let this show around others though, and don’t want it to be apparent that they are feeling a bit flustered. ENFPs become shaken when someone takes digs at them, and this can more than fluster them. For them it is often these inner emotions which cause them to feel a bit on edge or flustered, but this is also what makes them such caring and creative people.

INTJs don’t easily show their emotions, and so when they are a bit flustered this isn’t something people will likely notice. INTJs try their best to conceal when they are feeling overwhelmed, and would rather find a way to move forward and solve whatever is making them feel this way. When the INTJ does become flustered it is often because they have contained their emotions about something for too long, and find themselves unable to really keep their frustrations inside. Most of the time they are good at avoiding this entirely, since INTJs try not to let things get under their skin that much.

ENTJs don’t easily become flustered, and they certainly don’t show it to others when they are. They try to focus more on solving problems rather than allowing their emotions to get in the way. ENTJs push forward and work hard to get things done, without allowing themselves to feel overwhelmed by any hiccups. When the ENTJ does feel flustered they don’t want others to see this, and so they do their best to contain these feelings and try to remain calm. ENTJs are problem solvers and they value being efficient, even if something is stressing them out.

INTPs do become flustered in some social situations, but this isn’t always obvious to others. They keep things inside and conceal their emotions without even trying to do so. INTPs are often closed books, and because of this people might not know when they are feeling flustered. INTPs can become a bit uneasy when they are tossed into an uncomfortable social situation, especially if someone they have feelings for is around. They just don’t always know how to respond, and this can be challenging for them.

ENTPs don’t like showing if they are flustered, but they don’t usually find themselves in these situations. They try their best to keep moving forward without letting anything hold them back or leave them feeling scared to keep trying. ENTPs don’t like feeling flustered, but it really isn’t something that happens that easily. They are more likely to be flustered in an emotionally charged situation, especially if they are around someone they have serious feelings for. When this happens the ENTP might not entirely know how to respond to these feelings and it can fluster them a bit.

ISTJs are practical people and so they try to avoid letting emotions control them. They want to focus on solving problems and don’t believe in becoming flustered when things don’t go their way. Instead ISTJs do their best to navigate the struggles and figure out ways to improve. When the ISTJ is caught completely off guard, this can be something that fluster’s them a bit. This is because ISTJs spend a lot of time and energy preparing for any given situation, and so too much change can be unnerving.

ESTJs don’t often become flustered easily, mostly because they do their best to prepare for just about anything. ESTJs want to be able to adapt and overcome their challenges, hoping to be as efficient as possible. When the ESTJ is faces with too much change all at once, it can fluster them a bit. This is because they want to be prepared for things, and when a lot of change is sprung on them it can become frustrating and really throw them off their game.

ISFJs are focused and practical people who try their best to care for their loved ones. They keep a level head most of the time, and don’t become flustered by just anything. While they might not be extremely easily flustered, they do have certain things which rattle them a bit. When someone they love is unhappy, this is likely to leave the ISFJ feeling uneasy. They want to try and solve this problem quickly, but when it doesn’t work and their help is refused, it does fluster the ISFJ.

ESFJs don’t like becoming flustered, especially so that others can recognize this. They work to appear in control and don’t want their loved ones to notice any failures or weaknesses. There are some things which fluster the ESFJ, and it is often tied to the people they love. When they have worked hard to get things done for someone and it fails, it leaves them feeling both flustered and unnerved. They believe in taking care of their loved ones, and if they fail it leaves them feeling completely flustered.

ISTPs don’t like showing their emotions and often try to hide when they are feeling a bit flustered. They do prefer to go with the flow and so because of this they avoid allowing most things to shake them. ISTPs enjoy risk and being a bit adventurous, and so when things rattle them it is often in a good way. They don’t mind feeling a bit challenged, and in these situations they aren’t sincerely flustered.

ESTPs enjoy experiencing new things and so they don’t find themselves flustered easily. Instead they enjoy going with the flow of things and don’t want to let emotions overshadow their actions. ESTPs go with whatever feels right in the moment and try to navigate any challenges without letting it fluster them too much. They do however find themselves feeling flustered when it comes to their loved ones, and sometimes this can be rather frustrating for them.

ISFPs are often run by their inner emotions and sense of morals, and this guides them in life. The fact that they follow their hearts is often what causes them to become flustered easily than some people. They find themselves reacting to things which shake them up, and can appear rather worked up because of it. This is simply part of who they are, they are people who follow these feelings even if it shakes them up a bit.

ESFP
ESFPs do become flustered sometimes, especially when it feels like things aren’t going their way. ESFPs can become anxious and flustered somewhat easily, even though this isn’t something they are happy about. They follow their hearts and sometimes this can lead them to becoming shaken up by things which rattle their feelings.