Can You Be a Defensive Person, Based on Your Personality Type 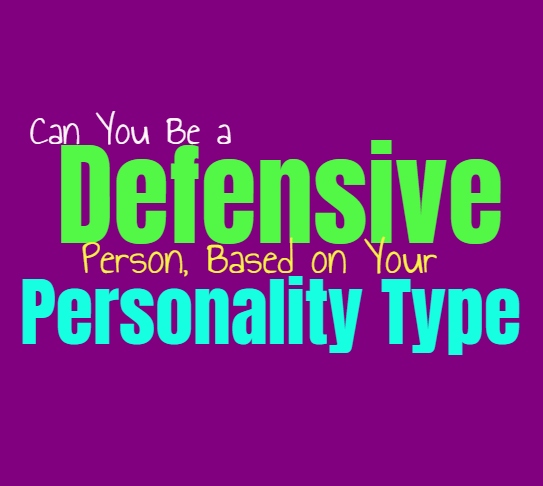 Can You Be a Defensive Person, Based on Your Personality Type

Some people are naturally more defensive than others and find it more natural to build up walls to protect themselves. Others are not quite as defensive, and believe in being more open to things. Here is how defensive you can be, based on your personality type.

INFJs can sometimes be defensive over certain things, even though this is not intentional. They are guarded people who are afraid of really letting others in. This is why INFJs are referred to as possessing many layers, because it takes time to peel back all the aspects to their personality. INFJs can be defensive of certain things in their lives, especially of certain people. When they are sensitive about things they might have a hard time accepting any negativity or criticism, and so the INFJ becomes defensive without entirely meaning to be this way.

ENFJs can certainly be defensive people, but they don’t necessarily mean to be this way. They are perfectionists and so they don’t want to fail or make mistakes with things. Having people notice that they haven’t done something perfectly, can be challenging for them. They can become defensive and try to find ways to make themselves appear like they haven’t done anything wrong. For the ENFJ this happens because they don’t want others to see their flaws or treat them poorly because of this. They hold themselves to unreasonably high standards and so this makes them a bit defensive.

INFPs try not to be defensive since they prefer to be more open around others, but it does happen from time to time. INFPs are defensive about their morals and strong inner beliefs, and don’t like when people challenge these too much. While INFPs enjoy being open to others choices and opinions, they still struggle when it comes to things they deem immoral. They have such firm inner beliefs that they don’t like when people try and go against this too much, and can become defensive when someone does.

ENFPs can be defensive people, even though this isn’t something they want to admit to. They often try and remain open-minded and don’t like seeming as if they are constantly trying to put up walls. ENFPs are often defensive about the things they are most insecure about, and so they have a hard time really accepting when these things are poked at. ENFPs want to be more open and less defensive about things, but they can be deeply sensitive people who are easily hurt by the people they love.

INTJs might not want to appear defensive about things, but they certainly can be. They are often very firm in their beliefs and can be defensive because they spend a long time learning and researching before coming to conclusions about anything. For the INTJ it is more about being accurate than defensive, and they do try to be open to new information when it is brought to their attention. INTJs can be a bit on guard though, since they have a tendency to build up walls and shield their emotions from others. INTJs are more defensive when it comes to their feelings, in the sense that they try to hide them.

ENTJs can be defensive when it comes to the things which are most important to them. They are protective of these things and have a hard time when others challenge them. ENTJs are also factual people and when they have committed to something it is because they have spent plenty of time researching and coming to accurate conclusions. ENTJs are defensive about these beliefs because they know them to be true, and they don’t like when someone who is ignorant tries to prove them wrong.

INTPs try to be open-minded people, especially when it comes to information. They want to constantly be absorbing new things and like to remain open to possibilities. They don’t like being defensive and try their best to consider the different angles or potential viewpoints. Where INTPs do become defensive is when it comes to their emotions, since they have a hard time expressing themselves and don’t find it easy to really open up about things, even to those they care about. INTPs sometimes struggle with emotions, and so these are the things which can make them a bit more defensive.

ENTPs try to be open minded about things and don’t like behaving in ways that are defensive. ENTPs actually enjoy debating new things instead of being stuck in the same boring place. For them it is more rewarding to debate and get into conversations about opposing beliefs, since this can help them actually learn something new. They are aware that there are many different things they can experience and learn by not being defensive and so they try their best to remain open. When it comes to emotions the ENTP can become a bit defensive though, since they don’t really know how to navigate them.

ISTJs are very focused on getting things done and sometimes this can cause them to be a bit defensive about things. When they have worked hard on something they can struggle to deal with criticism against it, and so they become defensive. ISTJs know when they have worked hard to get things done efficiently, and so they don’t appreciate when someone cannot recognize this. They try not to become short with people but they have a tendency to be defensive about what matters to them.

ESTJ
ESTJs can be defensive when something is important to them, and might have a hard time accepting when they are wrong. Instead ESTJs work hard to avoid these situations and can be serious perfectionists. They don’t want to be inefficient in anything they do, and so they can become defensive of people who try and cause them trouble or challenge these things. ESTJs can also be defensive when it comes to their emotions, since they have a hard time expressing themselves openly.

ISFJs try to be more compassionate and understanding people, but there are things they can become defensive over. They are often striving to take care of others and don’t want to make any mistakes in the process. Their perfectionist personalities are often what causes them to become defensive, especially when someone perceives them as doing something wrong or making a serious mistake. When this happens they often try to defend themselves, and sometimes this can make them appear a bit incapable of accepting when they are wrong.

ESFJs can be somewhat guarded and defensive people, even though they don’t want others to see them this way. They are perfectionists and this can cause them to struggle if they fail with anything. They don’t want others to see their mistakes or flaws and this can cause them to be defensive of themselves. ESFJs don’t do this on purpose, they just want to be someone who is strong and capable for the people they love. They care about taking care of others and this is often the thing which makes them defensive.

ISTPs try to avoid being defensive, instead they want to be open to things. They are factual people who believe in looking at the truth instead of being defensive if they are wrong about something. For them it is better to just let things roll of their back, instead of becoming constantly offended about everything. They don’t like being defensive since this feels like a waste of their time and energy. They can however, become defensive when it comes to their emotions since they struggle to really understand how to navigate them.

ESTPs can be a bit defensive about certain things, especially when someone is criticizing their actions. They don’t like being perceived the wrong way and want people to see them appropriately. For the ESTP it can be hard when they are feeling judged, and so they become a bit defensive in these situations. They try to focus on living in the moment and want to let go of the past, but sometimes they can’t seem to avoid being a bit stubborn and defensive about what matters to them.

ISFPs don’t like being defensive, instead they want to be open and sincere. They are usually capable of avoiding becoming overly defensive about most things, since they want to live in the present. For the ISFP it is more rewarding to just live in the moment and experience things as they come at them. They want to be capable of letting things go instead of being defensive when someone says something they don’t like. They would rather be around people who are sensitive to them, instead of those who make them feel defensive.

ESFPs try not to be defensive people, instead they just try to soak up the moment and enjoy themselves. They can be a bit defensive when someone is attacking their character, but this is something anyone would do. When it comes to normal things the ESFP is unlikely to be overly defensive, unless they feel like someone they love is disappointed in them. They don’t like letting people down, but they focus on the present moment and want to let the past go.