Here’s How Good You Are at Winging It, Based on Your Personality Type 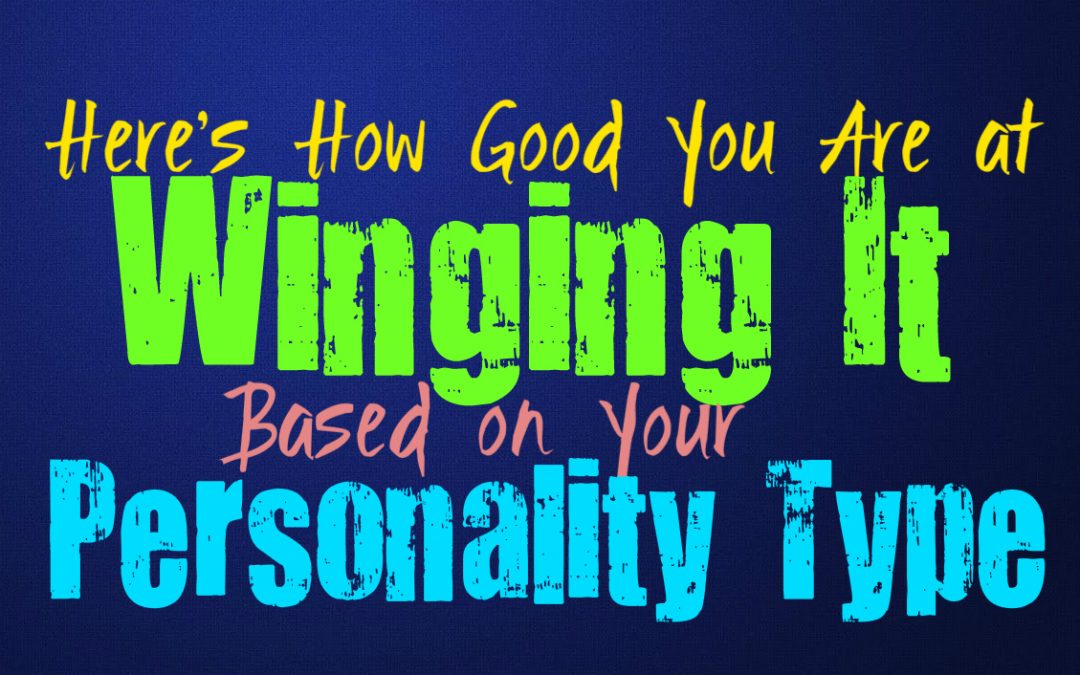 Here’s How Good You Are at Winging It, Based on Your Personality Type

While some people prefer to be prepared, others are naturally good at winging it. They seem to be capable of adapting to new situations and are good at figuring out how to get the job done in the moment. Here is how good you are at winging it, based on your personality type.

INFJs don’t really enjoy winging it, instead they prefer to be prepared. They often have enough intuition to help guide them through most situations, but because of this they are used to feeling prepared. INFJs don’t really like just winging it with most things, often because they are perfectionists. Winging it means that they are taking a chance things might not turn out so well, and this can be frustrating for the INFJ. They don’t like failing themselves or others and so they try hard to do everything to the best of their abilities. These rather high standards on themselves can make it a bit stressful to just wing it.

ENFJs don’t like winging it with anything, since they can be quite the perfectionists. They don’t want to chance that something might go wrong and so they prefer to be as prepared as possible. ENFJs work hard to take care of their loved ones and want to do whatever they can to make them happy. This work ethic means that they value being prepared and want to ensure that they get things done efficiently. ENFJs are capable of adapting to new situations but they try their best to avoid being tossed into something unprepared.

INFPs don’t mind winging it, and might do this fairly often. They don’t like having to prepare for everything and become drained with people who have to schedule constantly. While INFPs like to prepare in some ways, they actually might enjoy being able to just wing it. For them it is more amusing to dive into things and experience them without having to spend all of their time preparing and getting ready for what might happen. INFPs are adaptable people who want to find ways to overcome their problems without needing to be ready beforehand.

ENFPs definitely don’t mind winging it, and sometimes they even enjoy it. They don’t like living their lives on a constant schedule and prefer to actually enjoy things without constant preparation. ENFPs want to be able to dive into things headfirst, and enjoy a bit of a challenge. While ENFPs do like winging it, they are also fairly good at it- they can usually find a way to adapt to challenging and new situations pretty well. For the ENFP winging it really isn’t that scary, since their intuition and problem solving abilities will often guide them through.

INTJs definitely don’t like winging it, since they prefer to be as prepared as possible. They spend a lot of time learning and researching so that they can be ready and aware of what will happen. INTJs want to be able to navigate their path and work hard to be capable and prepared people. For the INTJ winging it means walking into a situation without knowing everything they need to know, and that feels a bit reckless and foolish. They are more capable of winging it than most people are, but that doesn’t mean they actually want to do this.

ENTJs definitely don’t like winging it, and prefer to always be prepared. Having to winging can be stressful for them, but that doesn’t mean they aren’t capable of it. ENTJs usually have enough knowledge and problem solving abilities that they can find a way to adapt to new situations. While they might be capable of winging it, this isn’t something they are comfortable with. They prefer to have time to prep and make sure they are knowledgeable before stepping into something new. They are planners by nature and so winging it can feel a bit stressful, but they are often capable of it.

INTPs are actually pretty good at winging it, and might find that it comes naturally for them. While they like to be mentally prepared for most things, they are still capable of walking in without planning every detail. INTPs like to plan some things more than people realize, even if they don’t schedule down to the last detail. While they might like to prepare themselves, they are still very good at winging it and figuring out how to problem solve without having to plan everything out beforehand.

ENTPs are actually rather good at winging it, since they are capable of navigating new situations. They often have enough information and problem solving abilities inside of their minds which helps the ENTP adapt to the unexpected. While they don’t mind planning some situations, they do enjoy winging it as well. Sometimes the ENTP will enjoy this as a way of challenging themselves and seeing how they can adapt and respond to a situation that is not quite expected or planned.

ISTJs can actually become pretty stressed out if they are forced to wing it. They want to be prepared and enjoy being able to plan things out ahead of time. Having to step into a situation without any preparation and simply being forced to wing it, is going to be a bit overwhelming for the ISTJ. While they are capable and hardworking people, it can be a bit too much if they have to wing it. They require the ability to prepare and learn about something before being tossed into it.

ESTJs really don’t like having to wing it, and can become a bit stressed when this happens. They prefer to be prepared and want to be able to plan ahead for most things in life. For the ESTJ it is important to get things right the first time, and so winging it just doesn’t make sense for them. They value efficiency and work hard to be able to get the job done, but that doesn’t mean they are incapable of winging it. ESTJs will likely feel stressed and uneasy with the idea of winging it, but they are very capable people who will still do their best to be good at whatever they do.

ISFJs definitely don’t like winging it, instead they prefer to prepare for things ahead of time. They would rather have the time to plan things out so that they can get it right the first time. ISFJs can be perfectionists and often put themselves under a lot of pressure to take care of their loved ones.  ISFJs don’t want to risk doing something that might hurt others or be a failure in some ways. Because of their desire to be near perfect they don’t want to simply wing it, and can become stressed if they are forced to.

ESFJs really don’t like winging it and can become a bit uncomfortable if they have to. Having to wing it can actually cause the ESFJ to feel anxious and overwhelmed in the moment. They can often navigate this situation even if it causes them to feel overwhelmed, and will do their best to step up to the challenge. While ESFJs might be capable of winging it, this isn’t something they enjoy being forced into. Preparation and planning are important things for the ESFJ, since they value being able to take care of others and want to know how to navigate a situation.

ISTPs don’t mind winging it and are often fairly good at it. They live in the present and like being able to adapt to new challenges. Instead of having to focus on planning and preparing for everything the ISTP wants to be capable of enjoying the moment. They like excitement and thrills, and so being thrown into a situation where they need to wing it can actually be fulfilling. ISTPs are good at adapting to changes and will take on the situation with a sense of awareness and problem solving abilities.

ESTPs are often pretty good at winging it, even if they seem a bit stressed when they are overwhelmed with a lot of changes. ESTPs can be procrastinators and so they need to learn how to wing it most of the time. For the ESTP it is more fulfilling to enjoy living in the moment than it is to constantly prepare for things that might happen to them. Winging it is something they are often fairly good at, and they do their best to enjoy the experiences.

ISFPs enjoy winging it from time to time, since having to constantly prepare can be exhausting for them. They don’t like having to plane very detail of their experiences and would rather dive into headfirst. ISFPs follow their hearts where they might lead, and so winging it is often part of that. They are good at navigating these new situations, even the ones that are a bit unnerving at times.

ESFPs are often fairly good at winging it, since they enjoy living in the present. They don’t like having to prepare and plan for every little thing, and actually like being able to take on new challenges. For the ESFP winging it can mean they get to experience a bit of excitement and thrill, especially since they prefer to follow their hearts. ESFPs can sometimes get themselves into trouble by winging it, but they are good at finding a way out of this.