How Much of an Open Book You Are, Based on Your Personality Type 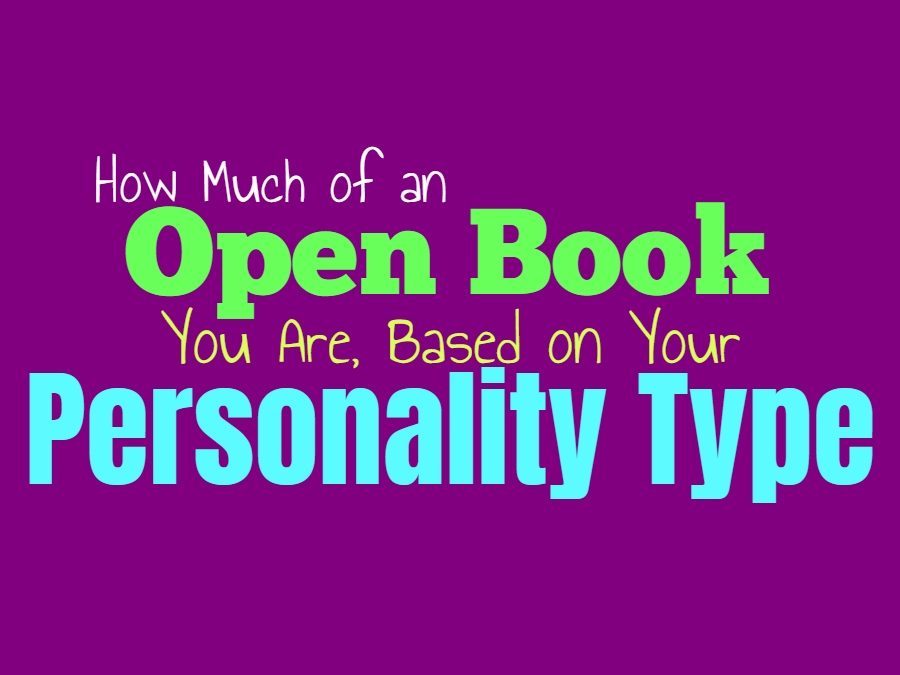 How Much of an Open Book You Are, Based on Your Personality Type

Some people are open books, they share themselves with others without fear of what it might cause. They aren’t capable of keeping things bottled up, and so they believe in expressing their thoughts and feelings openly. For others it is challenging to really express themselves, and so they are quite the opposite of an open book. Here is how much of an open book you are, based on your personality type.

ENFJs aren’t usually open books, since it feels difficult for them to fully open up to people. They don’t find it easy to really share the more personal things with people, even though they have a way of making it seem like they are more open than they actually are. In truth ENFJs aren’t open books, instead they take awhile to really feel like they can trust someone enough to fully express their thoughts and feelings to them without reservation or fear.

INFPs are often open books, and this is just naturally who they are. They have a hard time holding back and keeping their feelings bottled up. For the INFP it feels more natural to be open with who they are and how they feel. INFPs often put their hearts on the line fairly often, but this is just who they are and they find it more difficult to keep things to themselves in most situations. INFPs are open books because this is part of their personalities, and it is what makes them happiest.

INTJs are definitely not open books, instead they are often people who keep things locked up tight. They don’t find it easy or natural to expose their feelings to others, and keep most things bottled up inside. INTJs don’t easily trust people and so they don’t find it natural to expose themselves to others. It takes a long time for the INTJ to really feel comfortable sharing with someone or opening up to them, and even then they aren’t an open book.

ENTJs aren’t usually open books since they find it difficult to open themselves up to people. They also have a hard time really trusting most people, and it takes a while before they decide if they can actually trust someone. Once the ENTJ does feel more comfortable connecting with a person, they still aren’t open books. They keep a lot of their inner feelings to themselves, even when they are overwhelmed by them. ENTJs just feel more comfortable focusing on facts and logic, and so their emotions become neglected quite a bit.

INTPs are often the opposite of an open book and often take a long time to really feel comfortable around someone. They will show parts of themselves when they do trust a person, but it takes time for them to open up, if they even really feel safe doing so. INTPs are often closed off in this way, simply because they don’t feel comfortable exposing themselves to those around them. They can have trust issues, but they also struggle to process their emotions themselves.

ENTPs are not open books, although they might appear more open than they actually are. They are friendly and outgoing people, but they keep their thoughts and feelings to themselves most of the time. ENTPs don’t easily trust people and so it becomes frightening to really open up to someone until they do feel comfortable trusting them completely. Even when they are close to someone they do find it challenging to open up, and so they are rarely if ever seen as open books.

ISTJs aren’t open books, they are often more reserved people who keep things to themselves. They don’t find it natural to express their emotions outwardly, instead they have a tendency to bottle things up. For the ISTJ it is difficult to really share things with those around them, and so they are much more of a closed book. They don’t do this intentionally, they just don’t find it easy to express themselves or really open up to most people.

ESTJs aren’t open books most of the time, and often find it difficult to really open themselves up to those around them. They have a hard time really trusting most people and it takes them time to find the person they can really turn to. ESTJs also have a hard time expressing or understanding their own emotions and so they don’t really know how to find the right ways to show how they feel even to the ones they trust.

ISFJs are caring and friendly people but that doesn’t mean they are really an open book. They sometimes have a hard time really expressing their feelings, especially since it makes them feel like a burden. ISFJs don’t want to open up so much that it leaves other people feeling overloaded and overwhelmed. So ISFJs keep a lot to themselves, sometimes fearing what people will think or how they will respond.

ESFJs are compassionate people who enjoy connecting with others and want to feel close to them, at the same time they do struggle to sincerely open up. They often seem far more like an open book than they truly are, keeping certain things hidden underneath the surface. This is mostly because ESFJs don’t want to feel like a burden to those around them. They also become afraid of really opening up and feeling a sense of rejection, and so they struggle to really be an open book.

ESTPs aren’t open books, but they can become more open with someone they trust and care for. When the ESTP becomes close to someone they become more at ease sharing parts of themselves and really opening up about their thoughts and feelings. Before they reach this point the ESTP can be closed off and hesitant to really share themselves with others.

ISFPs are open people who believe in expressing their feelings without restraint. They follow their hearts and this can sometimes get them hurt, but this is simply part of who they are. ISFPs feel more comfortable sharing themselves and being open, than they do restraining their thoughts and feelings inside. For the ISFP being an open book isn’t intentional, it is simply part of who they are.

ESFPs are definitely open books, who sometimes struggle to really hold back their thoughts and feelings. They are more comfortable showing themselves to those around them, since this is what comes naturally for them. ESFPs don’t find it easy to bottle things up and often feel a deep need to express themselves openly. ESFPs are open books and this is just part of who they are and not really something they seek to change.