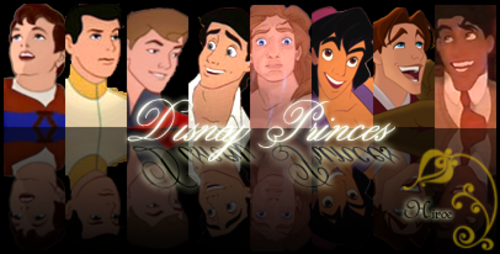 To go along with our list of Myers Briggs Disney Princesses & Heroines, we decided to create a list for their male counterparts. Here is a compilation of Disney Heroes for each Myers Briggs type. Enjoy!

Prince Ferdinand is a very romantic character, who believes in love. He falls for Snow White and finds himself taking risks and putting himself out there, even though he is shy. He is an introverted character, who forces himself outside of his shell for the girl he loves.

Prince Eric is very outgoing and affectionate. He is extremely charming and has a very likable personality. Prince Phillip is caring and conscientious, he has a willingness to do what it takes to make the ones he cares for happy. He is brave and unafraid of the obstacles that stand in his way.

Prince Eric is a romantic in every way. He is a dreamer and has a rich inner mind. Eric also has a strong sense of internal morals that he follows. He is very caring and wants to make the ones he loves happy. He holds onto the dream of Ariel when he only heard her voice, but he believes very strongly in his heart.

Aladdin is a dreamer and a romantic at heart. He is very outgoing and charming, and has a very likable way about him. No matter how low he is, Aladdin believes that he can acquire his dreams. He never gives up on the people he cares about, and has a very big and warm heart. Aladdin is fun and enthusiastic.

Shang is intuitive and intelligent. He is a natural strategist, and has a way of leading his men with confidence. He thinks outside of the box and is very open minded. He has an intuitive knowledge of the future, and scopes things out in a very logical manner. He has a strong sense of morals, and works hard to accomplish his goals.

ENTJ- Gaston (Beauty and the Beast)

Gaston is very outgoing and has a way of making all the ladies desire him. He is strong-willed and goes after what he wants without feeling guilty about it. He is domineering and sometimes seen as cold because he does not stop until he acquires his goals. He wants to control his environment, and has a very gregarious and confident personality.

INTP- Arthur aka Wart (The Sword in the Stone)

Wart is very intelligent and curious. He is constantly asking why, and doesn’t just settle for a simple answer. He wants to know more and understand the world around him. He is often very inside his own mind, and can be very logical. He can be somewhat stubborn, but he knows what he believes in. He has a way of thinking outside of the box, and becomes frustrated when others cannot understand him.

Robin Hood is very outgoing and charismatic. He does not believe in following rules, and instead breaks them when he sees fit. He is very strategic and intelligent, and always seems to be one step ahead of his enemies. Robin Hood is also very cunning and quick. He cares for others, and finds ways to help the less fortunate.

Chi-Fu believes in following a strict set of guidelines. He does not like the rules to be bent, and is very aware when they are. He likes to maintain control and dislikes when people challenge his knowledge of the rules. He believes in duty, and has a strong sense of internal morals.

King Triton has a strong sense of order, and is a natural leader. He wants to maintain control of the world around him and favors structure and rules. He cares very deeply for his family, and wants to provide what is best for them. He can be seen as controlling in his attempts to protect his daughters and his kingdom.

Hercules is very focused on the people around him. He desires very deeply to impress the ones he loves, and make them happy. He wants to please his father Zeus, and prove to him that he can be the very best. He sacrifices his own safety constantly, in his attempt to protect innocent people. He is occasionally self-conscious with the people he cares deeply for, but only because he wants so badly to impress them.

Kristoff is an introverted and intelligent character. He finds himself perfectly happy when he is alone, and allowed time to think. He has a dry and sometimes sarcastic sense of humor. He can be a bit cynical but is also a very caring and giving character. He is connected to the physical world around him, and works outside in the cold. He is very grounded and attaches a logical answer to most things.

Flynn is a very charismatic and fast paced character. He is intelligent and manipulative, and goes after his goals without guilt. He lives very much in the moment, and likes to take life as it comes at him. He is skilled at getting himself in and out of trouble, and is very connected to the physical world. He is very caring deep down, it just takes an ENFP princess to bring it out in him.

ISFP- Beast (Beauty and the Beast)

The Beast is very internal and lives in his own inner world. He is a romantic at heart, and truly just wants to be loved. Sometimes he acts out, but it is purely out of fear that he is not good enough. His true nature is very caring and gentle, just somewhat naive. He is very attached to the physical world around him, which makes his curse very challenging for him.

ESFP- Naveen (The Princess and the Frog)

Naveen is very charming and outgoing. He is a natural performer and does well being the center of attention. He lives in the present moment, and has a hard time seeing far into the future. He is fun-loving and charismatic, and has a very larger than life personality.