Just How Dogged You Are, Based on Your Personality Type 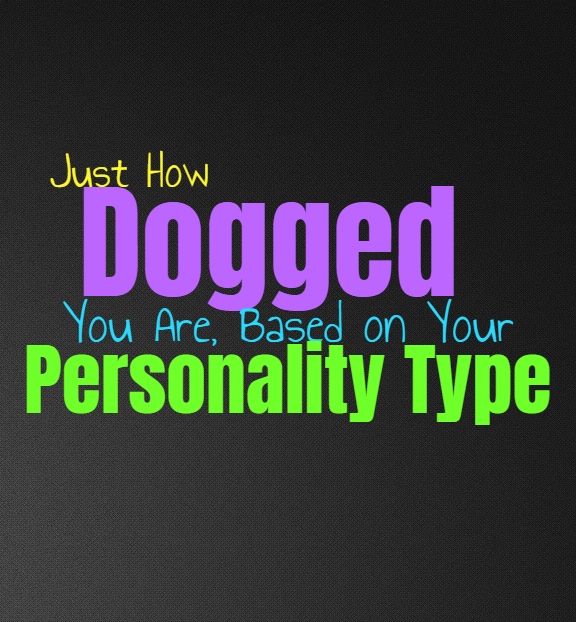 Just How Dogged You Are, Based on Your Personality Type

Some people are extremely persistent and even to a point where it becomes stubbornness. They go after what they want without allowing anything to stand in their way, and this can be to such a powerful degree that it seems a bit intense to those around them. Here is how dogged you can be, based on your personality type.

INFJs can certainly be persistent people, but it might not reach the level of dogged. They are capable of taking a step back and looking at the situation from a more objective point of view. INFJs don’t like feeling as if they are pushing too far or too hard for something when they could be negatively affecting others because of it. INFJs do have a tenacious and persistent side to them when something is deeply important, but this only carries into the things which hold a true meaning to them.

ENFJs actually can be fairly dogged people, especially when they get something into their minds. ENFJs are perfectionists who believe in always working hard towards their goals and performing in a truly efficient manner. When they set their minds to something they can certainly be persistent to such a powerful degree that nothing will stand in their way or stop them. ENFJs are strong-willed people who don’t like failing or falling behind with anything they do in life.

INFPs can be persistent and dogged people when they have something they believe in. When they are truly focused on something and want to stand up for these inner morals and beliefs, they can be really strong-willed about it. INFPs don’t like being overly pushy about most things though, and are capable of taking a step back. For the INFP it depends on the situation and just how strongly they feel about a situation or belief. When they are connected to something and believe it is the right thing to do, they can be unbelievably persistent.

ENFPs can definitely be persistent to the point of dogged, and they certainly have a stubborn side. When the ENFP wants something they won’t simply let it go because it becomes challenging to achieve this goal. When they set their hearts and minds to something there is pretty much nothing that can stand in their way. They will continue to search for ways to get what they want, sometimes enlisting the help of their loved ones. ENFPs won’t mind pestering people incessantly so that they can get what they want, and so this does make them a bit dogged.

INTJs can certainly be persistent and stubborn to the point of dogged. They don’t back down when there is something they believe in or want to achieve, even if it can seem a bit intense to those around them. INTJs believe in going after their goals and so they don’t want to allow anything to hold them back or stand in their way. INTJs don’t mind seeming a bit dogged, especially since it shows their willingness to fight for what they want and stand up for themselves and their goals.

ENTJs can certainly be a bit dogged when they are going after something or trying to achieve an important goal. They don’t mind being seen as someone who is persistent or stubborn, especially when they are working towards something important. ENTJs are strong-willed people and so being tenacious and focused is just part of who they are. When they want something they don’t believe in being hesitant or allowing things to prevent them from achieving these valuable goals.

INTPs can certainly be persistent people from time to time, but it entirely depends on the situation and the goal they have in mind. INTPs do have moments of serious stubbornness when they are focused on something or believe in what they are doing. Most of the time though INTPs are willing to bend and adapt to the circumstances, since they believe in being open-minded and want to always consider the many different angles which are in front of them.

ENTPs can sometimes be stubborn to the point of being a bit dogged, since they believe in going after the things they want. When the ENTP feels inspired or caught up in something, they don’t like feeling restrained or held back by the expectations of others. ENTPs like to explore different possibilities and search for the things which can be both challenging and enriching for them. Sometimes this means being a bit dogged in the pursuit of knowledge and understanding.

ISTJs can certainly be stubborn people and sometimes this reached the point of being a bit dogged. When they are focused on something they aren’t likely to back down simply because it seems difficult. They go after what they want and believe in chasing their goals without failure. For the ISTJ giving up really isn’t an option when they set their minds to something, and so this can appear intense to those around them sometimes.

ESTJs are certainly a bit dogged, especially when they set their minds to achieving something. ESTJs don’t like allowing anything to stand in their way and for them failure just isn’t a viable option. ESTJs believe in working as hard they possibly can to achieve these goals and believe in being efficient with everything they do. If they run into hurdles and struggles, then they won’t simply allow these things to hold them back and will persist no matter what.

ISFJs can be stubborn people but they don’t like taking this to the point where it becomes overbearing. They do stand up for their beliefs and strive to work towards their important goals, but for the ISFJ it is important not to upset or alienate others. When they want to achieve something they can certainly be persistent in pursuit of these goals but are often willing to back down if someone they love is becoming upset by it.

ESFJs can be very stubborn people who believe in chasing after their goals without failing. They don’t like being someone who gives up when things become difficult, especially when they goals they have deeply important to them. At the same time ESFJs don’t like being persistent to the point of being dogged, since this can upset their loved ones and seem a bit alienating. They don’t want to be someone who pushes others too far and so at some point they are usually willing to take a step back from the situation.

ISTPs are persistent people but they aren’t going to push for something which doesn’t make sense. They can be occasionally dogged when they are going after something important to them, or when they are searching for excitement in their lives. When the ISTP knows the facts of a situation this is when their more stubborn side comes to play, since they don’t like lying or backing down to someone who is spreading false information.

ESTPs are very persistent when they know the facts of a situation, and this can certainly reach the point of being dogged. When ESTPs see that someone is spreading false information they can be a bit stubborn when they are trying to correct this individual. ESTPs don’t like standing idly by while people are spreading lies and untruths, for them it is important to prove their point even if this makes them seem stubborn and overly persistent.

ISFPs are normally more laid-back people who are willing to go with the flow of things. They don’t like being stubborn when they are capable of taking a step back. ISFPs are certainly persistent when it comes to the things they deeply believe in, but they aren’t this way with everything they do in life. For the ISFP it is important to find this balance and figure out which battles they are prepared for fight for.

ESFPs are sometimes very stubborn people but at the same time they are capable of taking a step back and adjusting. They are adaptable when it comes to most things and can easily change their own minds and paths for something more inspiring to them in that moment. ESFPs do have moments of being stubborn about things, even to the point of being dogged. But for them this isn’t worth doing with every little thing and is only reserved for when they are deeply connected to their goals.