Can You Easily Recognize Inconsistencies, According to Your Personality Type 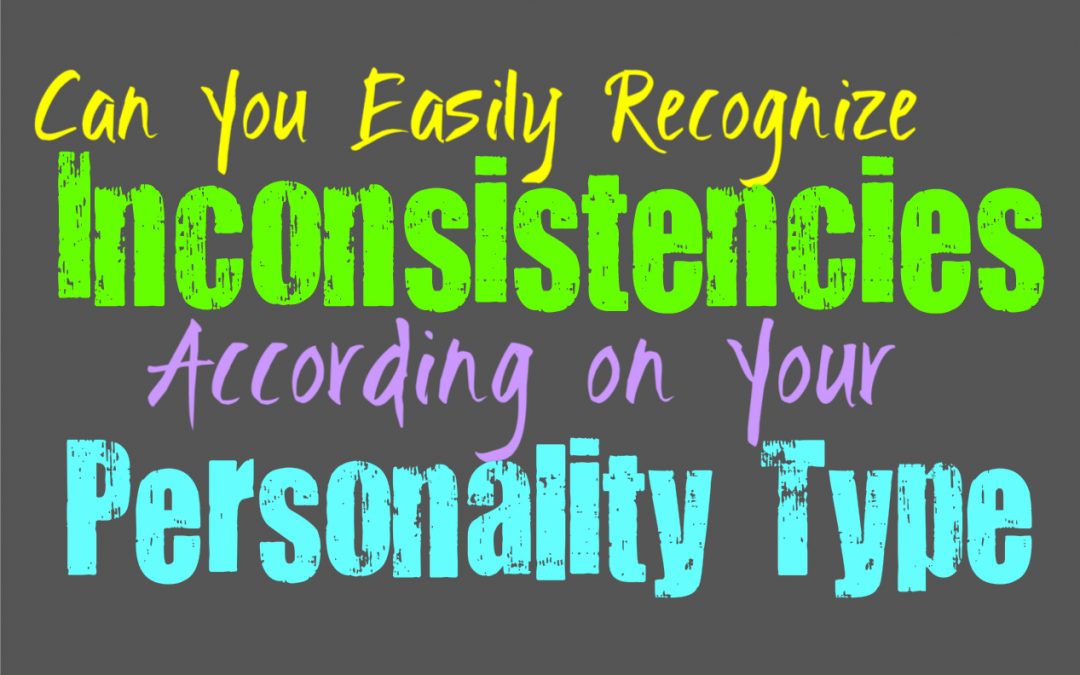 Can You Easily Recognize Inconsistencies, According to Your Personality Type

Some people have a knack for noticing even the slightest inconsistencies or errors around them, while others don’t really recognize these details. Here is how good you are at noticing inconsistencies, based on your personality type.

INFJs are often good at recognizing inconsistencies with people and certain things they are personally attached to. If they are passionate about a subject then they will often be able to recognize even the smallest of differences or errors. When it comes to some of the things the INFJ isn’t all that interested in, they might fail to fully notice the discrepancies that are there. While they are observant and intuitive people, there are simple some things they don’t pay as close attention to and so they won’t outwardly notice some of the details that seem unimportant.

ENFJs recognize certain inconsistencies, especially when it comes to the people around them. They notice when people say one thing and their actions seem completely different, or when they seem to be behaving in a way that just doesn’t seem consistent with what should be occurring. They will pick up on even the slightest of irregularities, and will be able to uncover some things because of this. They can also be very observant and aware with something that is important to them or with anything involving their careers. When it comes to certain outside things the ENFJ simply won’t care to pay closer attention to any discrepancies.

INFPs do sometimes notice certain inconsistencies, especially with things they are passionate about. The INFP is also likely to notice these inconsistencies when they are bored and feel the need to pay attention to anything that might feel entertaining. Sometimes they struggle to really pay attention to just one thing, and this is exactly what causes them to recognize certain details that might be off or just don’t quite add up. For the INFP it can sometimes be more entertaining to look deeper than to just pay attention to what people expect them to be looking at.

ENFPs are often oddly good at noticing inconsistencies, often because they cannot seem to pay attention to just one thing. Often when they are watching movies they will notice the smallest details that don’t add up, like something being out of place or things in the shot that should not be there. ENFPs often notice these little errors because they find themselves needing to pay attention to more than one thing at once in order to keep themselves entertained. When the ENFP is bored with what is in front of them, this is when they are more likely to pick up on inconsistencies because they are paying attention to other details.

INTJs are often very good at noticing even the smallest inconsistencies, especially since they focus on the facts of any given situation. They are more likely to notice inconsistences when it comes to information they receive, and will be able to see where things just don’t line up properly. INTJs try to really pay attention to the important details so that they don’t miss anything which might help them down the line. When it comes to things they aren’t interested in, they might miss certain inconsistencies since they are more focused on their own inner thoughts.

ENTJs are very aware of the things that matter to them, and when they are trying to learn about something they won’t miss the finer details. They can pick up on any inconsistencies with information they uncover, and will do their best to figure out what the truth actually is. For the ENTJ these discrepancies are things they are very capable of recognizing, and will do their best not to miss a thing. When it comes to less important things they might miss certain pieces, simply because their thoughts are somewhere completely different.

INTPs are rather observant people who enjoy picking up on information that other’s won’t naturally recognize. They can sometimes find themselves looking at all of the details and this is often what helps them recognize inconsistencies. They might actually try to pick up on these inconsistencies, since they are curious people who like to uncover information as best they can. They often miss out on things that don’t interest them though, and find themselves not really recognizing their more emotionally driven inconsistencies.

ENTPs are good at observing things, especially when they are interested in the subject. They can often pick up on the smaller details and things that other people might miss out on. ENTPs are good at recognizing inconsistencies since they are often actively searching for them. They are curious people who enjoy uncovering information and finding out things that others might struggle to really understand. Where ENTPs might not be great at noticing inconsistencies, is with things they find a bit boring and often their minds drift elsewhere.

ISTJs can recognize inconsistencies when it pertains to facts and important information. When they have something directly in front of them that they often understand and know a lot about, they will easily notice all the discrepancies in this information. They want to get things right and so this means paying close attention to the things that matter most to them. They work hard to get things done and don’t like failing when it comes to those truly vital tasks. Because of this desire to get things perfect the ISTJ will pay very close attention to any errors or inconsistencies.

ESTJs are good at picking up on inconsistencies when it comes to the things that important to them. When it comes to their work or their daily tasks, the ESTJ works hard to ensure that everything is taken care of with a sense of efficiency and skill. They focus on these things and don’t want anything to keep them from getting the job done with a certain level of perfection. While they might not recognize inconsistencies easily, they will work hard to take care of it with these certain things.

ISFJs do try to pick up on inconsistencies, and are especially good at this when it comes to their loved ones. When someone they care for is not being entirely consistent then the ISFJ will be capable of noticing this, mostly because they care. They don’t want to miss anything important when it comes to others, and so they pay attention to changes or things that just don’t add up. ISFJs naturally have a way of reading people and their behaviors, which helps them to recognize inconsistencies.

ESFJs can naturally recognize inconsistences when it comes to people, since this is often where their greatest skills are. They have a way of picking up on their loved ones and how their behaviors might change. They want to be sure that their loved ones are taken care of and so if they are acting in a way that doesn’t quite make sense, the ESFJ wants to figure out what is going on. For them it is easiest to pick up on inconsistences with their loved ones than with anything else.

ISTPs can pick up on inconsistencies in the physical world more than anywhere else. They are good at observing their surroundings and seeing where things might not make sense. ISTPs are drawn to facts and the things which can be proven, and so if something doesn’t fall in line with this they will likely notice this lack of consistency. ISTPs are good at noticing things around them, but might not recognize inconsistencies with people or their emotions.

ESTPs are often good at picking up on physical details around them, and so in those situations they can recognize the inconsistences. They do their best to focus on the facts, and this also helps them to notice when something doesn’t quite match up with the truth. ESTPs do notice these types of inconsistences rather naturally, but in some situations they might struggle. They often have a harder time when it comes to more emotional based inconsistences, since they can be once the fence with these things.

ESFPs can definitely recognize physical inconsistencies around them, which can be helpful in some situations. They can often tell when someone isn’t feeling well or when something is wrong, mostly because of their posture and how their physical appearance has changed. These are the things the ESFP can really pick up on, which helps them be more supportive or even good in the medical field. While they are good at picking up on these inconsistencies, there are other things they prefer to ignore since they enjoy living in the moment.