INFP Loyalty: What Being Loyal Means to the INFP 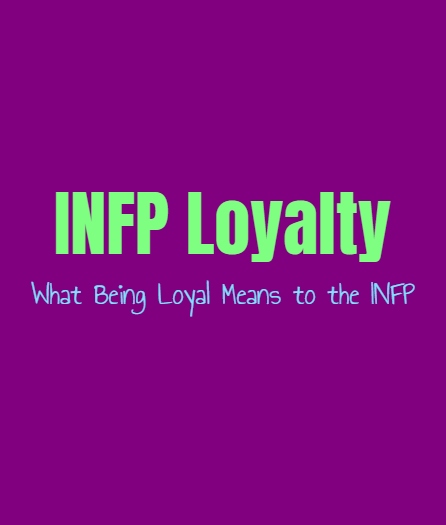 INFP Loyalty: What Being Loyal Means to the INFP

For INFPs loyalty is often a very important thing in their relationships and in their own lives. They have strong morals, and these morals are what helps guide them. For the INFP holding onto their morals and ideas is a major part of who they are, and they don’t believe in turning their back on this. Even when people challenge these beliefs the INFP will whatever they must to stand firm, if they fail they will feel extremely guilty and struggle with accepting the situation. Because of this moral compass the INFP often values things like love, trust and loyalty in their lives.

What Loyalty Means for the INFP

For the INFP the idea of loyalty is likely something they think about often and in great detail. They are dreamers with rich inner minds, and because of this they spend so much time inside of these inner minds. During this time inside of their thoughts and imaginations, the INFP likes to analyze ideas and their own beliefs. Their morals are strong and a major part of who they are, but that doesn’t mean they don’t spend time thinking through all of these feelings and inner beliefs. INFPs will consider the many angles and even consider other options, just to really understand themselves and the situations better. The INFP is also a dreamer, and so sometimes it is about imagining scenarios in their minds and thinking through what they would do if those situations ever arose.

For the INFP loyalty should be given to those close to them, their family, friends and their romantic connections. They believe that this is simply part of caring about someone, and part of showing them how you truly feel. When they decide to let someone in and become close to them, the INFP truly feels like loyalty is part of this deal and part of this commitment. They don’t feel like it is right to offer your time and heart to someone, without also being loyal to them. This type of allegiance should not come from fear or obligation, instead it should be because they care deeply for one another and would never want to betray their trust. When the INFP loves they give it their all and love with their whole heart, and they expect at least a portion of this in return. This is why they have certain expectations and ideals in relationships, ones they don’t want shattered or ignored. Loyalty is one of those truly important things which the INFP believes should be held onto and respected in friendships and romantic relationships.

For the INFP loyalty means standing by someone, even when they are struggling. It means defending this person when others have turned their back on them, and not allowing fear to hold you back. The INFP will defend their loved ones to the world, and will be someone who stands in the gap when people seek to harm these people close to them. For the INFP it isn’t important to gain the favor of strangers, but it is vital to be someone who stands up for the ones they love even when everyone judges them for it. For the INFP this is a sign of true loyalty and is something they truly value and want from their loved ones as well. They don’t believe in focusing on what the masses want or care about, instead they only want to focus on their own heart and beliefs, as well as the people they love most in the world. INFPs also believe that loyalty means never betraying this person’s trust and doing what they can to avoid hurting them. The INFP is often labelled as someone who bounces around from one thing to the next, leaving people making assumptions about their ability to remain faithful, but these judgements are entirely false. When the INFP has committed to remain faithful to their partner, they would sooner die than betray this. But that means the INFP expects this in return, or else they will feel completely disconnected and lost.

For the INFP giving loyalty is just as important as receiving it, but this is something which should go both ways. They will do absolutely anything to fight for their relationships, but if someone betrays their sense of loyalty and morals the INFP will struggle to hold on. It often depends on the level of betrayal and how serious the INFP takes the act committed, but they have a hard time moving on when this happens. The INFP will try their best to forgive but this isn’t something which comes easily when they feel deeply betrayed. They don’t want to give up on their loved ones, but will likely never truly be able to forget what they have done. Without loyalty there is no trust with the INFP, and without being able to trust someone they will likely lose faith in the relationship entirely. Since the INFP values loyalty so much, they really don’t handle betrayal well and will likely struggle to remain connected to someone who has abandoned this sense of loyalty.