Why Millenials Are So Jaded

Many people are having a hard time understanding the millennial generation. They are placing labels and stereotypes to generalize the generation. However, many times, these oversimplications are completely missing the mark, which leads to millennials, who are already frustrated with being understood, to become even more jaded and apathetic (perhaps even nihilistic). 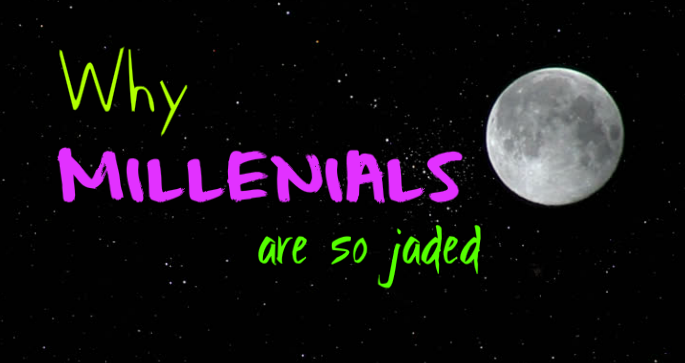 Millenials were brought up during a “hero era” where they had athletes and people of influence to look up to. The media created these “heros” though their storytelling and narratives of their good deads and moral values. Many millenials saw these figures as role models, only to be let down once the truth about their character started to come out.

Don’t think there’s something to this? Let’s quickly ramble off the names of a few very significant figures that might have been role models to kids of this generation.

Martha Stewart (some people looked up to her, right?)

All have been involved in scandals. Many had been covered up for years, sometimes even decades! Its easy to see why millenials are jaded. Most are just waiting for the other shoe to drop. Many just have surrendered to the belief “that’s just the way things are.” I mean, even if you look at people that are celebrated as “great heroes,” your left with people like NFL coach Bill Belichek, who has been involved in cheating multiple times but is still celebrated for his Super Bowl victories. Or Steve Jobs, who despite his great accomplishments at Apple, has been know to berate and scream at his employees.

Millenials have had a rough go when it comes to finding true role models. They don’t particularly see anyone worth looking up to and admiring. Or, they find it foolish to try because they feel like they’re likely to be duped at some point in the future. This could be part of the millenials fascination with “Anti-Heroes” in movies and pop culture. These characters seem more relatable because they still try to make nobel choices despite their many issues and imperfections.

Millenials Were Promised The Moon

Many Millenials were also fed false promises. The narrative of needing to get a college degree was shoved down millenials throats and marketed to their parents with almost reckless abandon. Many parents believed that the best thing they could do is to get their child to go to college. While this isn’t an article to bash the merits of college, the value of a college degree has been severely overstated for many fields, and is continuing to decrease as a necessary requirement for a number of employers.

The college degree frenzy has led to another huge problem affecting many millenials. That is the problem of student loan debt. Never before in American history have so many young people been saddled with such a large debt to start out their lives as this generation. This leads to millenials having to make some very tough and strategic choices before they have really had a chance to really live.

Graduating college at 22 or 23 and deciding if you should end up buying a house, getting a new car, or possibly saving up for marriage presents a ton of extra burden besides just paying back your student loans. Even if you manage to get a good paying job out of school, you still have some very tough choices to make.

And also, what about the student that aren’t able to land that “dream job” they were banking on after school? There are countless stories of these recent graduates keeping their job in the service industry or continuing their job as a server at a restaurant because the jobs in their field just aren’t hiring them. Now they have student loan debt to pay off, and not much more money to spend or save (hah!) on other near necessities. Buying a house sounds like a pipe dream to many. Having a reliable car and hopefully saving enough money to move out of their parent’s homes seems to be a noble goal for many.

Millenials are entering a very unstable job environment with low employee loyalty. Many jobs have a very high turnover rate. Millenials are expected to switch jobs over 7 times in their career! They are in a job environment that is not at all similar to their grandparents which had many people as lifetime employees for 30+ years. And pensions? What?! Millenials don’t even know what that word means.

A side effect of this is that many millenials aren’t eager to buy a house (even if they can afford one) and find the process of renting much easier. With the lack of job stability, there is no guarantee that millenials won’t have to move or relocate for another opportunity in the future.

The world of the millennial is filled with uncertainty, debt, and a lack of true upstanding role models.

With banks getting government bailouts for their mistakes, while watching their responsible parents and professors 401K retirement savings get completely wiped out right before they were ready to retire, it’s no doubt that the younger generation is angry, but at the same time apathetic, about the optimistic lifestyle they were promised in the 1990s. It seems like the nostalgia for that time is partially because it was a reminder of when things were good, and life was simple. Because as many millenials know, ‘this ain’t yo grandma’s generation!’

If millennials are going to be lumped in with a stereotype, its at least a good idea to see where they are coming from. Sure, some of the blame lies on the individual, but when older generations are saying that millennials have it easy, maybe they need to better understand the critical issues many of today’s youth and young adults are facing.