Are You a Cooperative Person, Based on Your Personality Type 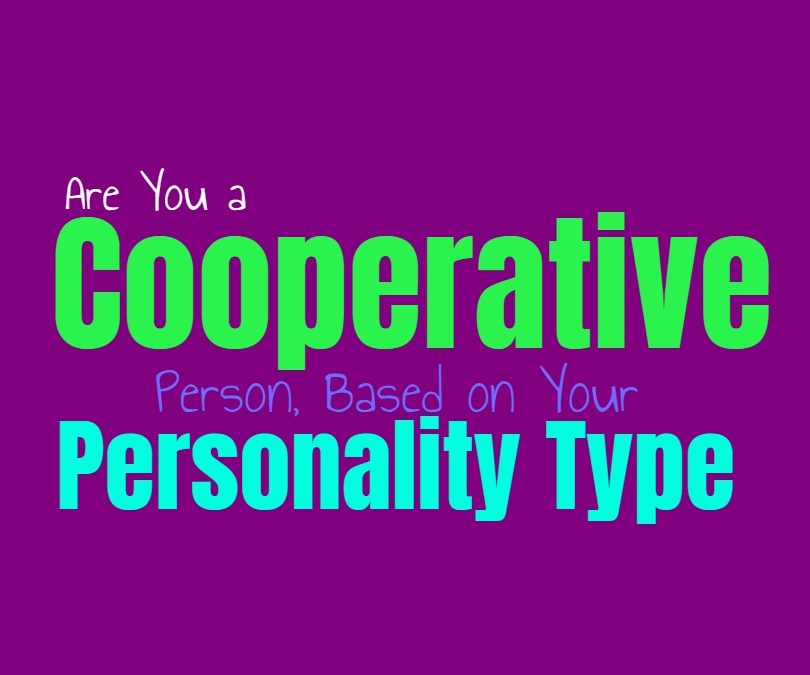 Are You a Cooperative Person, Based on Your Personality Type

Some people are just more likely to cooperate with others, and actually enjoy working towards a similar goal. Others might struggle to really work on a team and find that cooperation isn’t something that is all that natural for them. Here is how cooperative you are, based on your personality type.

INFjs do try to be cooperative as best they can, and don’t like causing unnecessary discord. They do their best to make others happy and can often do well working towards a similar goal. For INFJ there are just certain times when they aren’t in a place to cooperate, and so they might feel themselves doing the exact opposite. This is often when the INFJ has been drained and really needs time to themselves, and so they become much more combative than usual.

ENFJs definitely try their hardest to be cooperative people, especially since they want to please others. They do their best to go along with what others need or want, as long as it doesn’t go against their own personal morals. For the ENFJ it is important to be there for others and to do what they can to make them happy. This means being a cooperative person and not constantly challenging things when they could just as easily go along with it.

INFPs do their best to be cooperate and sensitive to the needs of those around them, but at the same time they do have occasionally combative moods. For the INFP it depends on the situation and how they feel about. They follow their own sense of morals and goals, and so the INFP doesn’t go against this even if it means a bit of discord in their environment. For the INFP it is important to do what they believe is right, even if that means not cooperating.

ENFPs can sometimes be more combative people, especially if they are bored. They try to cooperate when they feel it is important to work as a team, but sometimes they feel the need to go against this. ENFPs become bored if they are stagnant for too long and so this causes them to push the limits and challenge people just to see what their reaction will be. ENFPs can also be less cooperative when they simply don’t believe in what others are doing and they feel a moral need to make this known.

INTJs do try to be cooperative when they can, but they won’t simply go along with others for the sake of keeping the piece. Because of their desire to stand by their beliefs and doing what they feel is right, INTJs can be seen as less cooperative people. If everyone has the same goal in mind then they do their best to work together as a team, they just don’t believe in standing idly by while someone is doing something completely wrong.

ENTJs do believe in working as a team and try their best to be cooperative people. While they don’t want to create unnecessary discord, ENTJs do sometimes struggle with cooperating when they see that someone is doing things wrong. They value efficiency and believe in doing whatever they need to in order to get things done impressively. For the ENTJ sometimes this means being a bit more challenging, and refusing to simply cooperate.

INTPs try to be cooperate people, mostly because they want to avoid excess interaction with others. At the same time this isn’t really behavior that is natural for them, since INTPs can be a bit stubborn when they know they are right about something. They often see what they believe to the best smartest path and choices to make, and when others cannot see this it becomes a bit frustrating. This is why INTPs often prefer working on their own, and do best when they have space.

ENTPs are capable of being cooperate people when they want to, but this isn’t something they constantly feel like doing. ENTPs can actually be challenging people, mostly because they enjoy shaking things up. ENTPs also like to debate about many different subjects, and sometimes will go against the beliefs of others just to see where it might lead. They want to figure out different potential outcomes and so this means they aren’t always cooperative people.

ISTJs do try to be cooperative people, mostly because they believe in efficiency and working to get things done. They don’t want anything to hold them back, so sometimes this means simply cooperating with those around them. At the same time ISTJs believe in efficiency and so sometimes this means going against people, and being a bit more combative. They do what needs to be done, and most of the time they do prefer to work on their own.

ESTJs are capable of being cooperative people when this will help them move forward and get things done. While they do their best to work with others on a team, ESTJs can often find themselves naturally taking the leadership role, so that they can make sure things are getting done efficiently. ESTJs won’t simply cooperate with others to avoid discord, especially if it is obvious that things aren’t being taken care of properly.

ISFJs believe in getting along with others and are naturally focused on pleasing those around the. This desire to please others does make the ISFJ a much more cooperative person. They don’t want discord in their environment and try their best to keep the peace. Instead of shaking things up by disagreeing, the ISFJ can often find themselves being much more cooperative just to get things moving in the right direction.

ESFJs try their best to be cooperative people, since they do want to please others. The ESFJ will try to avoid doing or saying anything which might cause drama or shake things up too much. They are likely to just cooperate with the smaller things since this helps them keep the peace when they can. If there is something more serious that the ESFJ feels they need to disagree with, they aren’t afraid of being more combative.

ISTPs are capable of being cooperative, but rarely do they have to the desire to be this way. When they disagree with someone they are comfortable challenging them and don’t like just refraining for the sake of someone else. They believe in challenging others, especially when it comes to authority figures. They are often seen as more combative people, maybe even a touch argumentative.

ESTPs can be cooperative when they are around the right people, people who they rely on and want to please. When it comes to most people they encounter ESTPs can have a hard time being completely cooperative with them. They can be a bit bossy and might feel like getting things done right is much more important than simply cooperating with what others want and expect from them.

ISFPs try to be cooperative people, mostly because they don’t want to start unnecessary drama. They try to keep the peace, but for them this often means avoiding people they don’t easily get along with. ISFPs simply want to be around the ones they love and trust, and can be truly cooperative around these people. When it comes to being around strangers and feeling forced to work with them as a team, they might not be as cooperative as people would think.

ESFPs aren’t necessarily cooperative people, and can actually be a bit combative. They aren’t afraid of speaking their mind and if something isn’t going in a direction they are happy with, the ESFP will make this known. They are stubborn people who believe in going after what they want, and don’t like feeling held back or controlled by anyone. This does make them less cooperative people, unless they are around someone they care for deeply and want to please them.