Do You Take Yourself Too Seriously, According to Your Personality Type 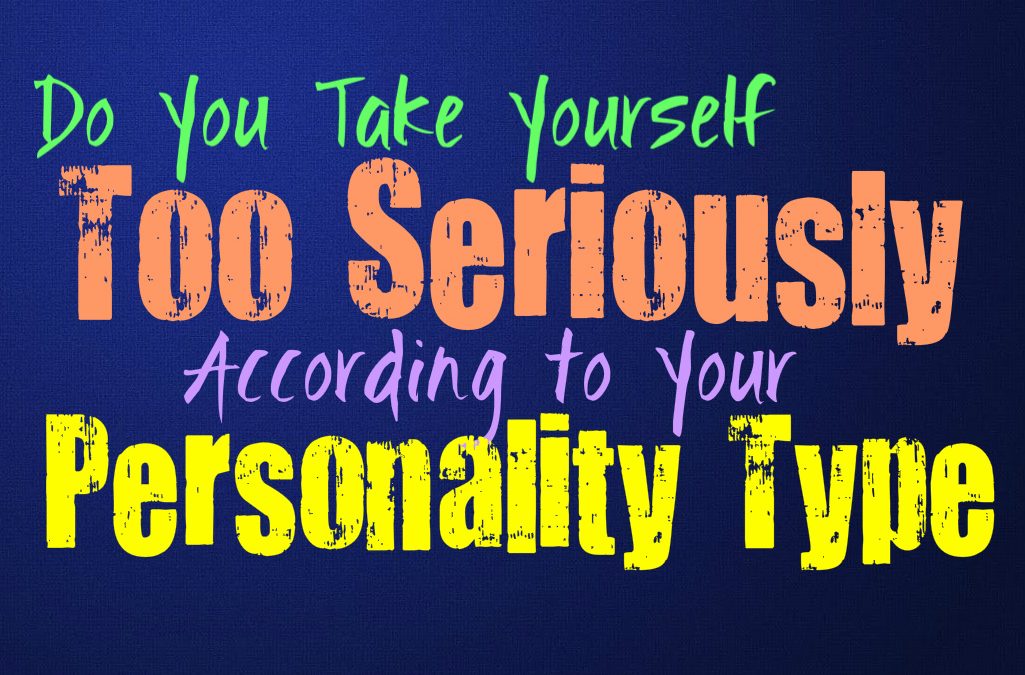 Do You Take Yourself Too Seriously, According to Your Personality Type

While some people know how to make things lighter and even laugh at themselves, others might have a tendency to take themselves too seriously. They can struggle with letting loose at times, and might not want to be seen as someone who is goofy. Here is how seriously you take yourself, based on your personality type.

INFJs can appear to take themselves seriously, but in truth they don’t. They are capable of being serious when the situation calls for it, but that doesn’t mean they are uptight people at all. INFJs are often capable of self-deprecating behavior, and so they certainly don’t take themselves too seriously. INFJs are rather contradictory people at times, since they are rather hard on themselves and want to be perfect for others, but at the same time they don’t take themselves too seriously. They often know deep down that they need to take a step back sometimes and really experience life without a sense of constant structure.

ENFJs can sometimes appear to take themselves rather seriously, but that is only when they are focused on something. While ENFJs know when to be serious in order to get things done, there is also another side to their personality. They know how to be more playful and dive into the muck of things when the time calls for it. ENFJs don’t need to constantly take themselves seriously, especially when they are around people they deeply trust and can rely on.

ENFPs don’t often take themselves all that seriously, and are perfectly capable of relaxing and being self-deprecating. They don’t enjoy people who cannot take a step back and constantly feel a need to take things far too seriously. Being around these types of people can leave the ENFP feeling annoyed and they might even mock that person. In most situations ENFPs really don’t take themselves all that seriously, and this is often how they would prefer things.

INTJs can appear rather serious from the outside, and in many situations seem to take themselves seriously. For the INTJ it isn’t about taking themselves seriously, but rather focusing on what matters to them. INTJs know when to be serious and when they no longer need to be, for them it depends entirely on the circumstances. They also put off a different demeanor towards people they do not trust, and so they might appear to take themselves more seriously than they actually do. When they are around people they care for it is pretty obvious that the INTJ doesn’t only take themselves too seriously.

ENTJs can sometimes appear to take themselves too seriously, but this is often from the perspective of people who don’t know them all that well. From an outside view they can appear rather strict and serious, focusing hard on getting things done their own way. ENTJs do have a hard time with people viewing them the wrong way, especially if it could hold them back from accomplishing their goals. When they are around people they trust the ENTJ often unleashes another side of their personality, one which isn’t quite as serious.

INTPs can sometimes appear to take themselves too seriously, especially when they are around people they don’t trust. INTPs can sometimes worry about how others view them and so they don’t like doing anything that might be viewed the wrong way. While INTPs have a playful and even self-deprecating side, there is a part of them which can take themselves a bit too seriously in certain situations. This comes from a desire for others to see them a certain way, and a fear of being judged in a way that might hold them back.

ENTPs don’t often take themselves too seriously, at least not when it comes to living their lives on their own terms. They enjoy being a bit playful and even exploring different sides of themselves and those around them. ENTPs aren’t afraid of being self-deprecating or taking risks which might be a bit unnerving to others. ENTPs really don’t take themselves too seriously, and so they know when to take a step back and approach things from a much goofier point of view.

ISTJs can appear to take themselves too seriously sometimes, since they are so focused on efficiency. They don’t like being too laid-back about the things that truly matter to them and their loved ones. ISTJs simply have so much pressure on them to be successful and provide for their family. This makes it challenging for them to avoid taking themselves seriously, especially when they are trying to get something done and are focusing on their work.

ESTJs can sometimes appear to take themselves too seriously, especially since they value efficiency so much. They can become a bit too focused on getting things done, mostly because they put a lot of pressure on themselves to succeed. This pressure can weigh on the ESTJ and cause them to appear rather serious, even though deep down there is much more to them than this. For the ESTJ their image is important simply because they value being someone their loved ones can look up to and be proud of.

ISTPs certainly do not take themselves too seriously, and will become a bit annoyed with people who do. While ISTPs value learning and understanding about new things, that doesn’t’ mean they are incapable of having a good time. ISTPs are logical and factual people, but their knowledge only makes them driven to take themselves even less seriously. They live in the moment and seek out the things they enjoy, instead of focusing on things that will hold them back.

ESTPs don’t take themselves too seriously most of the time, since they enjoy living in the moment. ESTPs want to seek out the things that will fulfill them and cause them to feel rewarded by their experiences. They don’t like taking themselves too seriously, since this can hold them back from truly enjoying themselves. There are times when the ESTP can get a bit intense, but for the most part they prefer to soak up the things that bring them a sense of joy.

ISFPs don’t like taking themselves too seriously, since they enjoy experiencing new things and living their lives in the moment. They want to follow their hearts and do what feels right, and they don’t like having to constantly take themselves seriously. There is a part of the ISFP that can appear a bit intense, but this is when they are following a moral belief which they want to stand firm with.

ESFPs live their lives seeking out joy and doing what feels right in the moment. They have big hearts and will go after what they want the most in life. While ESFPs care about being respected by their loved ones, they still don’t like taking themselves too seriously. They focus more on having fun and doing whatever feels good in that moment. They aren’t interested in being someone who constantly takes themselves too seriously, since this often seems a bit boring to them.