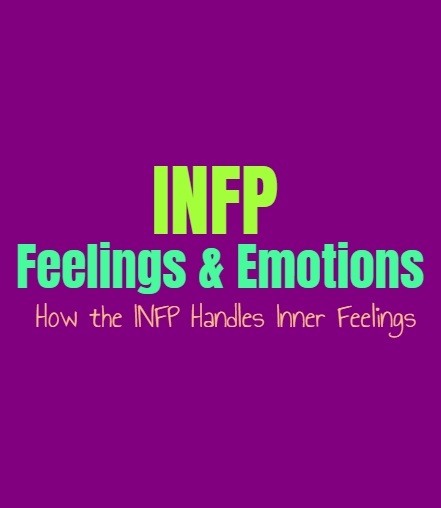 Everyone experiences and responds to emotions differently, and so it is important to understand this unique process for each individual. Sometimes knowing a person’s personality type can be this first step towards understanding them better and understanding their inner emotions. For the INFP their emotions and feelings are truly an important part of who they are and how they see the world around them. It is important to understand this on a deeper level, rather than slapping on stereotypes and lacking a true comprehension of what makes the INFP the way they are and of what that actually means.

The INFPs dominant function is tied to their inner emotions, it is their Fi or introverted feeling function. This helps the INFP reach inward to understand themselves, and what they believe and value. This isn’t all about allowing emotions to dominate their behaviors, like some people might believe. For the INFP this is about understanding themselves, and recognize their own limitations and boundaries, as well as their inner desires. INFPs need to focus on this Fi and these inner feelings in order to truly understand themselves and gain a sense of confidence in who they are. This doesn’t make INFPs overly dramatic or emotional people, instead it just helps them to consider the importance of these emotions in their lives.

This Fi also plays a huge role in giving the INFP a strong sense of inner morals. This is what makes INFPs care so deeply about holding onto their own morals and values. They don’t want to rely on the outside world to make these decisions or harness these beliefs, instead they need to look inward. It is also a major reason why the INFP needs so much time to themselves, without constantly hearing the noise of the world around them. They need this space to process events and situations through these inner feelings, in hopes of comprehending themselves and their responses better. This is why INFPs can stand behind their choices, because they come from deep inside and are not reliant on how other people will respond. While some might think this is fleeting they would be wrong, since the INFP is often more grounded in these beliefs than it may seem.

Why Emotions Are Important

Emotions are deeply important to the INFP, but also to humanity as a whole. While some might believe that logic is the most important thing, they would be misguided in this assumption. Balance is vital in making things work and in finding the path to take. Without the INFPs strong inner emotions they would not be themselves, they would not be caring and moral individuals. They believe in doing what is right, and will stand up for these beliefs when others are afraid to do so. This doesn’t mean everything they think or feel is correct, but it does make a difference in the world in a positive way. The INFP who is healthy and has learned to understand their emotions, can help inspire others to become comfortable with their beliefs as well. It can help inspire people to speak up against the injustices they see, helping them to find ways to really help others and make a difference in the world.

Finding the balance of emotions and logic is something truly important. INFPs care about understanding themselves, but they also care about following their hearts even when it seems difficult. They believe in going after these dreams, and being this type of imaginative and dreamy person is deeply inspiring. Without people who are willing to follow their hearts, the world would certainly be a dark place without any room for light. INFPs value speaking their truth and being upfront with those they care for, which is truly an important lesson to remember. While there are times when these emotions can be challenging and feel overwhelming, the INFP doesn’t want to push them aside. Sometimes feeling things so deeply can be difficult, but avoiding or burying those feelings can only make them fester. INFPs might have times when the waves of emotions can overwhelm and exhaust them, but they will take the time to sift through them when they can. This often helps them process these feelings in a much more efficient manner than the types who neglect themselves.

Some might give the INFP the stereotype of being emotional or sensitive, but this doesn’t go deep enough into understanding them. While INFPs are sensitive people, this should not be noted as a bad thing or a negative. Their sensitivities are what helps the INFP show a sense of caring towards others, it is what makes them aware of the world around them in a more compassionate manner. Instead of constantly seeing things as cold hard facts, they look deeper and care about the moral aspect of these actions. This is why INFPs are so important and so needed in our world, without them we would lack that sense of inner morals. INFPs are the ones who help keep people in check, who help them remember that emotions matter. Simply looking at facts is not going to weigh in some very important parts of the situation, and will likely leave out the morals which help us maintain a sense of humanity in our actions.

It is also incorrect to say that INFPs are overly emotional or cannot handle their feelings. INFPs do not bury their emotions inside and ignore them, and because of this they are more equipped to handle them than some types. There are plenty of personality type who do not focus on emotions and instead push them deep inside, this actually causes them to have outbursts. INFPs are less likely to have these severe outbursts, since they allow themselves to experience their own emotions. They express these feelings openly, and want to take the time to work through them. This actually helps the INFP to behave more rationally about their feelings than people realize, since they are used to them and know what to expect. The healthy INFP is rarely blindsided by their own feelings, because they value them and actually pay attention to what they are experiencing. The fact that they have gained an inner knowledge of themselves makes the INFP more confident and comfortable with what they feel and believe in.