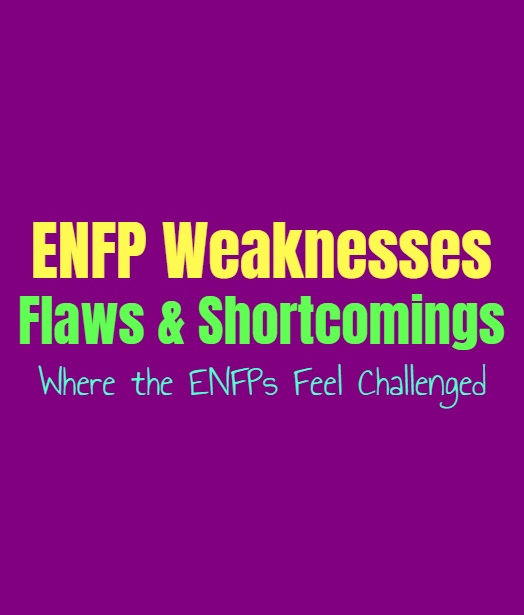 Everyone has their own natural strengths, but the balance is that we all have weaknesses as well. When it comes to recognizing these shortcomings the process can be difficult and sometimes emotionally draining. Taking notice of your own flaws or mistakes is something which can help us all grow, but can also be hard to process at times. For each personality type it is important to learn about these weaknesses in order to grow, but in some situations it can be helpful to know which areas we will naturally struggle in. Knowing where we will naturally excel and where we will feel challenged, helps to regain a sense of inner confidence. When we understand that these natural weak spots are what make us struggle in certain tasks, it can make it easier to see where we should be in life.

When it comes to understanding their weaknesses the ENFP might struggle to really process this. While they are seen as fun and positive people, they can actually be hard on themselves when they make mistakes. ENFPs want to understand their own needs and emotions better, but seeing their shortcomings might be difficult. In order to feel confident in their strengths it can be useful for them to learn about these shortcomings. ENFPs do enjoy being able to grow and move forward in life, which makes it necessary to really uncover more about themselves and their natural weaknesses or places they are most likely to find challenging.

ENFPs really aren’t fans of sticking to schedules or having to keep things organized in their lives. They find themselves wanting to explore different things and don’t like being locked down to time constraints. When they have to make it somewhere by a very specific time, the ENFP might struggle to do so. They can often be late for certain events, usually only by a few minutes but on occasion it can be even worse. ENFPs just don’t find it natural to live their lives based on a strict schedule, and often become stressed when they are asked to do this. They want to be able to bounce around and focus on whatever inspires them. The ENFP needs to feel a sense of freedom in their own choices and not be locked down by obligations.

While there are positive aspects to this part of the ENFP, it can also be seen as a weakness in some situations. When it comes to work obligations and needing to be on time, the ENFP can become overwhelmed with this. There are times when they just cannot seem to focus on what needs to be done, and might show up late for certain things. This can also be something which upsets their loved ones at times, especially if it feels like the ENFP doesn’t care because they can’t keep up with a schedule. It isn’t about not caring for the ENFP, they just find that their own inner minds can distract them from being capable of really sticking to deadlines and schedules.

ENFPs don’t like following the rules and will often go against them intentionally. They don’t want to be told what to do and instead want freedom to do their own thing. When the ENFP is in a situation where they are being told what to do, they often challenge this. They want to question things and be sure they are making a choice based on their own desires and morals. This is certainly something which makes the ENFP strong-willed and independent, but at times it can make life difficult for them. When the ENFP challenges the rules just for the sake of going against authority, it can get them into trouble. They might find themselves disagreeing with their boss or loved one, simply because they don’t want to follow their rules. This desire to be their own person can be taken to a level which causes the ENFP to create discord where they don’t really need to.

ENFPs can be easily distracted since their minds pull them in so many different directions. They find themselves struggling to remain focused on just one thing, and this can be something which gets them into trouble at times. When they should be focused on finishing a project the ENFP can become bored of the same thing, and will venture off into a different direction. They do often come back to these projects, but might leave them unfinished for a while when they are exploring something new. They need to constantly be inspired and excited by something, and this can cause them to become bored of things easily.

ENFPs don’t focus well on mundane tasks or obligations, and find themselves distracted when they have to tend to these things. This can sometimes put a strain on their relationships, especially if they are around people who prefer organization and people who get things done in a timely fashion. This can also be a challenge at work, especially if the ENFP isn’t in an environment which gives them a lot of independence and creative liberties.

While ENFPs might not be as overly emotional as people think, they do struggle with certain criticism. When someone they love criticizes them or tries to give them advice, the ENFP can take this rather hard. They struggle when someone they care for makes a comment that they might feel is negative, and can become easily hurt by their words. Even when the person isn’t intending to be hurtful or say anything harsh, the ENFP can often take this the wrong way and become upset by it. They might not show this outwardly, but they will likely internalize their feelings and try not to let people know just how hurt they actually are, until it comes out later on.