The Plight of Being the Incredibly Rare INFJ Male 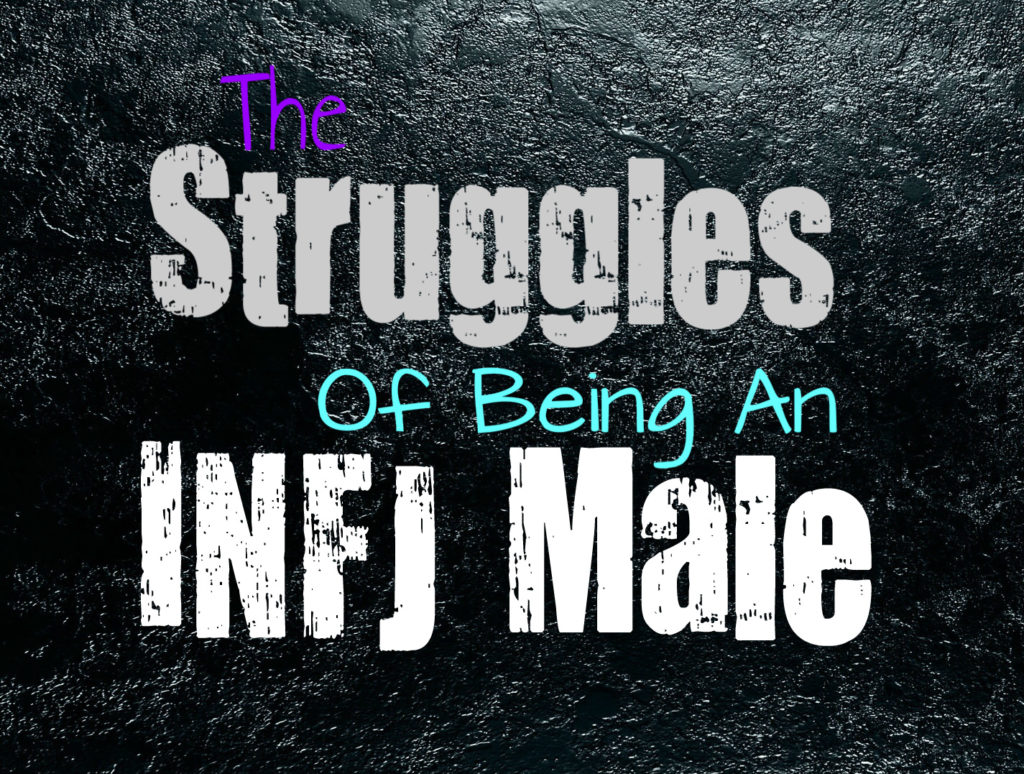 The Struggles of Being An INFJ Male

We all know that INFJs are rare folks, with rich inner minds and a surprising way of reacting to the world around them. INFJ males are even less common, and because of this they are often faced with unique struggles. Being different can leave them feeling alienated from the world around them, and even cause them to experience certain levels of self-doubt. Here are a few things that make the INFJ male both unique and incredible.

They Don’t Fit Into Traditional Roles

INFJs in general simply do not fit into traditional roles most of the time. They follow their own set of morals and beliefs, and dislike being shoved into a box. They will often push against anything that is traditional, simply because they don’t enjoy not being allowed to be themselves. They also despise when other people are forced into a role that does not make them happy. INFJs believe in standing up for people, which can often make them appear different from others. They often do not fit into what society believes is “right” or “normal” and will definitely go their own way.

This type of ideal can sometimes be difficult for INFJs, especially male INFJs. They do not always fit into the stereotypical image of what a man “should be” and will often have their own unique way of looking at things. This doesn’t mean that an INFJ male won’t still possess many of the typical male thought patterns and behaviors, but they simply appear more like a lone wolf in many ways. They often do not stand for other peoples sometimes selfish actions, and are much more in tune the emotions of others.

They Are In Touch With Their Emotions

INFJs are in touch with a more emotional side to themselves, even INFJ males. This can be seen as strange, since it doesn’t fit into societies somewhat ridiculous idea of how men should behave. They are not overly emotional individuals by any means, and often prefer to keep their feelings to themselves. They are independent and private, which makes their emotional side only visible to those closest to them. INFJ males do however have a rather compassionate nature, and will come to the aid of those in need. They enjoy helping people when they are in pain, and want to be there for people as much as they can. They are in touch with the world around them, and might even come to someone’s defense if they are being bullied or hassled. This sense of caring and consideration makes them strong individuals, who are comfortable with emotions instead of terrified of them. In many cases the people around them will truly appreciate this warmth, making them amazing friends and partners in life. At a younger age though, this sense of compassion can get the INFJ into trouble themselves. It takes people who understand them to fully appreciate their depth and sensitivity.

INFJs are very nurturing people, who enjoy taking time to help others. They will not shy away from someone who is hurting, and will often be willing to comfort them. This is not always connected to typical male behavior, which can sometimes be confusing to others. INFJs males might even feel the need to stifle these qualities when they are younger, in order to fit in. They are in touch with the emotions of others, and truly care about people. They want to do whatever they can to help and to make a real difference in the world around them. This feeling often begins at a very young age, which will often leave the INFJ feeling completely alienated from most people around them.

They often do connect with their masculine side and enjoy having time with their male friends. The issues arise when they are around friends who are boastful and enjoy acting deplorable or obnoxious. The INFJ will often be more than willing to speak up against this behavior, especially if it is deemed as an injustice to someone else. They do best around friends who are sincere people, not simply show-offs looking to impress others.

They Keep to Themselves Most of the Time

INFJs are independent and introverted people, who enjoy plenty of time to themselves. This means that even in college or during their younger years, many INFJ males probably preferred to spend time with their favorite people, rather than go to a raging party. When they do attend these types of events they often find themselves wishing they had not gone against their better judgment. They prefer quiet time, often reading or absorbing something that they truly enjoy. This may cause the INFJ male to appear rather different than the typical outgoing, excitement driven male. This is often more of a struggle during their younger years, when it is seems important to be social and in many ways…obnoxious. INFJs aren’t like that, and would prefer to spend time focusing on real encounters.

INFJs can sometimes appear moody or distant, simply because they require time to themselves. Sometimes they are feeling drained, and need to separate themselves from others. This can be confusing, since they are actually very empathetic and warm people. They are emotionally driven, but they are also extremely logical individuals. They need time to think and process things on their own, which can throw people off sometimes. This need for alone time and space, might cause the people who care for them to become hurt. This can also be a struggle for an INFJ male, since most of the time people are expecting a man to be aggressive by nature. INFJ males are capable of going after what they want, but they aren’t always extremely forward and aggressive about it. They will express themselves, but they won’t push people if they seem resistant.

They Dislike Anything Shallow, But They Contradict Themselves

INFJs often feel out of place and like they don’t fit in with many others. They are unique and rare people, especially the unbelievably rare INFJ male. They often feel disconnected from what people expect them to be, simply because they are some of the most uncommon individuals on the planet. Their way of thinking and processing their world is very different from many other people. They dislike anything shallow, and will often want to avoid the typical “fun” activities that others might enjoy. INFJs want to make real and lasting connections, and might even hate the idea of continuous one night stands. Many times this will cause the INFJ to appear odd to others, since they would prefer to let people into their lives who truly deserve to be there. They don’t want to spend time conversing in small talk, and would much rather share in a deep meaningful conversation with others.

INFJs males enjoy aesthetics, but also hate anything shallow. They fit into the continuously baffling INFJ paradox, and will often contradict themselves to outsiders. They simply are complex people, who have a depth inside of them that is not visible to others. They do care about how they look, and might be extremely hard on themselves when it comes to appearance. At the same time they hate anything superficial, and want much more depth than most people are willing to offer.

INFJ males will often hide their less stereotypical male qualities, instead of allowing others to see them. Because of the way the world operates they might feel afraid to be completely open at a young age. This leads to a rather unhappy INFJ, since they will feel alone and completely insincere. It is vital for an INFJ to be true to themselves, so hiding in this way can be very bad for them. Feeling like they have to keep their true nature a secret, can cause them to recluse into themselves completely. They might even find themselves apathetic and incapable of operating in the world around them. When they aren’t allowed to be themselves and let their less common qualities shine, the INFJ is simply not being true to who they really are. It is vital for them to find people who cherish their qualities, and who appreciate how unique and special they are. When they finally do get around people like this, the INFJ simply needs to become open with themselves in order to begin to shine. If they aren’t allowed to live up to their full potential, their incredible inner light will fade away.

They Make Incredible Partners In Life

The INFJ male might be incredibly rare, but they are also very special. They have a connection to others, and are warm but also thoughtful people. Their ability to be compassionate makes them wonderful friends and romantic partners. They have both feminine and masculine qualities, which make for an almost perfect balance- one that let’s face it, we are all kind of hoping for in a partner. They possess many different qualities that can often be confusing until you dive deep into their soul to learn everything that makes them who they are. Once you are allowed into the world of an INFJ, do not take that for granted. They might have their stubborn moments, they might drive you crazy when they desire to be rebellious- but they are warm, loving and amazingly understanding people. They are hopeless romantics at heart, who sometimes desire to hide that part of themselves away. It is important to help your INFJ and keep them from hiding their light. Cherish them, and appreciate the qualities that make them so unique- they will definitely thank you for it.

The Truth Behind the INFJ Paradox Explained