Will You Accept Opportunities When They Are Handed to You, Based on Your Personality Type 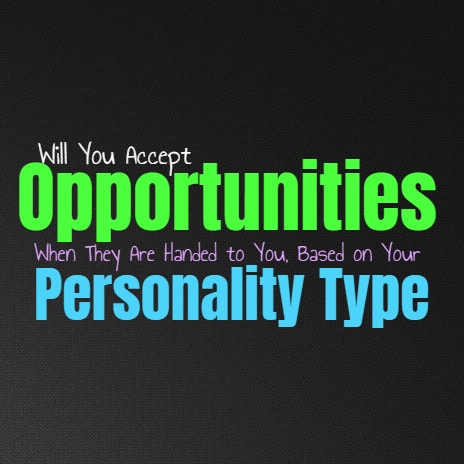 Will You Accept Opportunities When They Are Handed to You, Based on Your Personality Type

Some people are more included to accept opportunities, even when it feels like they have been handed to them for no good reason. Others would rather search for their own opportunities and might have a hard time taking this help if it doesn’t feel earned. Here is how you handle opportunities, based on your personality type.

INFJs don’t mind accepting opportunities, especially when they are given from someone who loves them deeply. They enjoy feeling like they matter enough for someone to try and help them succeed. INFJs don’t find it easy to ask for help, but when someone is capable of providing a leg up they aren’t morally against it. The only issue for the INFJ is feeling like they are a burden and like they need someone else to guide them instead of doing it themselves. They don’t want to feel like they are seen as weak or incapable, and so accepting the helping hand might be confusing for them in this way.

ENFJs don’t find it easy to accept help from people most of the time, so being open to opportunities can be challenging. At the same time ENFJs work very hard for everything they have, and so the occasionally lucky opportunity often feels like something they deserve. They fight so hard to make things work and so when something comes around which seems to be easy, it can feel like it is simply them getting back what they give so much to others. ENFJs can be hesitant but they are likely to accept these opportunities if it feels right.

INFPs don’t really mind feeling like they have gotten lucky or recieved opportunities, and are often willing to accept this graciously. They don’t want to feel like it is unfair though, and become upset if they feel like someone is being bias or unjust. INFPs are okay with accepting a little bit of opportunity when they believe they have worked hard enough to truly deserve this. Otherwise they do believe in fairness and become upset when someone just get handouts they don’t entirely deserve.

ENFPs don’t mind taking opportunities when they are given to them, since they don’t like feeling stagnant or stuck. They enjoy having doors opened to them and often want to give it a shot and see how it goes. If the opportunity feels too much like an obligation then they might be hesitant to move forward with it. They want to feel like they have a chance to make things happen themselves and so sometimes it can feel too much like charity if they are given opportunities easily from others.

INTJs don’t like to feel like things have come unfairly, but they aren’t opposed to taking opportunities. INTJs want to work for what they achieve but they won’t pass up on an opportunity simply because it seems too easy. They are well aware of what they deserve and so they are willing to take advantage of these things. INTJs believe in moving forward and don’t like feeling like they have foolishly turned something down simply because it seemed to come too easily for them. They will simply make the most of this opportunity and turn it into something great.

ENTJs don’t find themselves afraid of taking advantage of opportunities given to them, especially if they feel like they can really make something of it. They realize that some opportunities might be given simply because they know someone, but they also realize that they cannot harm themselves by turning away from these chances. The world is filled with opportunities which are handed to certain people, and so they don’t feel like it is unfair if they take hold of this.

INTPs might be hesitant to take advantage of opportunities which seem to have been handed to them. If it feels unfair then they might find themselves unsure about taking that next step. They can have doubts that it will turn out right, and want to be able to analyze their choice before moving forward. INTPs don’t like feeling like things are unfair and would rather be sure they have earned something the right way. For them it can feel like an obligation if it is handed them too easily, and this makes them uncomfortable.

ENTPs don’t mind opportunities which seem to be handed to them, mostly because they want to be able to experience things. If doors are opened up to them then the ENTP really wants to be able to take advantage of this. They might see that some of these opportunities are a bit unfair, but they also are capable of seeing that the world is filled with these types of opportunities which are give to people simply because they know someone. They will definitely take advantage of these things, especially if they are excited about them.

ISTJs don’t like when things feel unfair or unjust, since they work very hard for what they get in life. If it feels like an opportunity is being presented in way that isn’t fair and others will notice this, ISTJs might be hesitant to take advantage of it. They would much rather be sure that they are being given these chances because of their work ethic and abilities. Most of the time ISTJ are aware that they deserve opportunities given to them though, and will be happy to make the most out of them.

ESTJs don’t like when things feel unfair but at the same time they don’t want to pass up on opportunities given to them. They work hard and so even if it seems like someone is giving them something because they like the ESTJ as a person, they still know that it is deserved. They work hard to get things done and believe in focusing on efficiency, and so they don’t want to cheat themselves by turning down any opportunities.

ISFJ
ISFJs are often willing to take advantage of opportunities given to them, especially if it will help their loved ones in some way. They are okay with having people give them opportunities, especially since it can be helpful. ISFJs work hard to achieve their goals but that doesn’t mean they are afraid of taking hold of things which come a little easier for once. They believe in being fair and won’t be cut throat to get these things though, and believe in being honest.

ESFJs are often willing to take advantage of opportunities which are handed to them, since they have to work so hard for most things in life. They find themselves pushing forward and juggling so many things in order to take care of their loved ones. ESFJs don’t like falling behind and so sometimes it is nice to have things come a little bit easier than usual. They don’t like things being unfair but they constantly work hard to take care of so many people and so this juggling can be exhausting after a while.

ISTPs don’t really like when things feel unfair, but they aren’t opposed to taking advantage of new opportunities. For the ISTP it often depends on the specific situation and they will want to analyze it to figure out what is the best choice. They will take advantage of certain opportunities, especially ones which inspire them the most. ISTPs might take this opportunity if it is something they truly want to be able to experience.

ESTP
ESTPs are willing to take opportunities which are given to them, especially if it something they truly want. ESTPs go after what feels right in the moment and don’t like doubting themselves or feeling held back. If they are given an opportunity which they are excited about then they will go after it without fear or regret. They don’t want to consider if it is fair, since they realize that some things just come up and they need to not overthink it.

ISFPs go after what they want in life and don’t like feeling hesitant to experience things. There might be times where they feel like they are being handed something unfairly, and so they might analyze this and want to understand it. For the most part ISFPs will take advantage of opportunities which inspire them, as long as they don’t feel obligated.

ESFPs go after what they want in life, even if they feel like it comes a bit too easy. There are times when they realize they have been given something because of a specific connection, but ESFPs don’t want to turn this down simply because of that. They believe in taking help from the people who love them and enjoy feeling special in this way.