Just How Hospitable You Are, Based on Your Personality Type 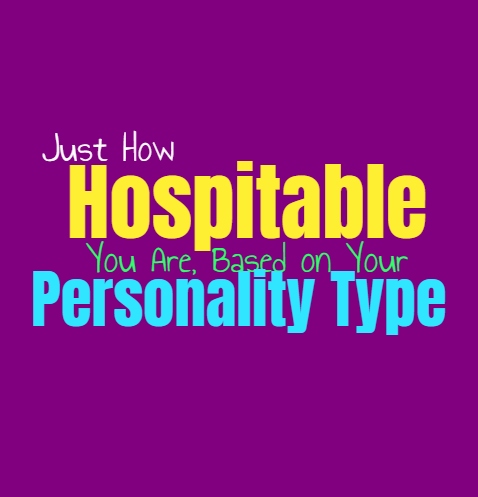 Just How Hospitable You Are, Based on Your Personality Type

Some people are naturally friendly and accomodating, which makes them good hosts and hostesses. They enjoy being welcoming to people, even new people they are meeting new people. For the hospitable person it is nice to engage with guests and help them feel comfortable. Here is how hospitable you are, based on your personality type.

INFJs try to be hospitable people, especially when they are in a situation where they have entertain guests. They do become drained with too much social interaction, but that doesn’t mean they are unfriendly. INFJs do their best to make others feel comfortable and help them feel at ease in their presence. When they are in a situation when they are meeting new people, they are often very hospitable and welcoming. INFJs might behave a bit differently when their emotional and mental batteries have already been drained though, and in these circumstances they just don’t have the energy to be hospitable.

ENFJs are definitely hospitable and welcoming people, who enjoy being able to make others feel comfortable in their presence. ENFJs are excellent at entertaining guests, and are even skilled at being friendly and hospitable towards new people. While some are more comfortable with the ones they know and love, ENFJs are also good at being hospitable and friendly towards new people they meet. They are naturally skilled at hosting and making people feel welcomed in their presence.

INFPs try their best to be hospitable towards others, since they are kind and friendly people. While they are good at showing this kindness, they aren’t always comfortable entertaining new people. INFPs become drained by too much social interaction and so when they are feeling like they need time alone, it can be difficult for them to be as open to new people. INFPs certainly try to be hospitable, there are just times when they are feeling overwhelmed by the presence of others and so they need to be away from crowds and strangers.

ENFPs are friendly and good at getting to know new people, which does help them seem more hospitable. They enjoy interacting with others and like to make new friends whenever they can. ENFPs will certainly be hospitable when they are meeting new people and trying their best to get to know them. They like to make others feel comfortable, but at the same time they aren’t always fans of having to be the host or hostesses of the group.

INTJs try their best to be hospital when it is necessary, but most of the time they prefer to be on their own. They become drained when they have to interact too much and so they aren’t always in hospitable moods. When the INTJ is focused on something or is inside of their own minds, they really don’t want to feel forced to host others and so they aren’t all that hospitable during these times. INTJs are more cordial and respectful of new people than they are hospitable and warm towards them.

ENTJs try their best to be good at hosting others, but they aren’t really fans of feeling forced into these situations. They are good at being respectful and cordial with new interactions, but that doesn’t mean they are completely hospitable. They do their best to be open to people and can certainly be good at making friends, ENTJs just prefer to be on their own sometimes. They enjoy focusing on getting things done and are very hardworking people.

INTPs aren’t naturally hospitable people people, since for them feeling obligated to meet new people. They can become uneasy when they are forced to be the host or hostesses and entertain strangers. INTPs are more comfortable around people they know and trust, and are much better at being welcoming and accommodating for them. INTPs simply become so caught up in in their own inner minds that it becomes challenging for them to really focus on hospitality.

ENTPs are friendly people which can help them be more hospitable when need be. They enjoy meeting people and interacting with them, especially if they can learn something from these new friends. ENTPs don’t like feeling trapped in one way of thinking and so they are willing to open themselves up to introductions and being more hospital towards strangers. ENTPs simply because distracted easily which can cause them to be drawn towards something else rather quickly.

ISTJs are naturally respectful and hospitable people, and try their best to be good hosts and hostesses. ISTJs do however, have times when they just need to be on their own.They can feel a bit drained by too much social interaction, and in the moments when they are feeling overwhelmed they really need to avoid people. ISTJs still want to be polite and hospitable, but sometimes they really need to be on their own so that they can recharge and feel like themselves once again.

ESTJs are often good at being hospitable, as long as they aren’t focused on something they need to get done. When they are stressed and really need to get something done, they don’t like things to distract them. When they do have the time for it ESTJs enjoy being friendly and hospitable to new people. They are respectful and polite people, who enjoy being able to connect with others and be seen as a valued member of the community.

ISFJs are definitely hospitable people who deeply enjoy being able to meet new friends and connect with them. ISFJs are naturally good hosts and hostesses, who want to make others feel comfortable around them. They want to make the people around them happy and enjoy creating a sense of harmony in their environment. ISFJs also are good at being hospitable and welcoming to new people, especially if those people are friendly and kind.

ESFJs are often very hospitable people, and they enjoy being welcoming to others. For them it is enjoyable to be friendly and interact with new people they meet. ESFJs want to make people comfortable around them, especially when they are meeting someone new. They are definitely hospitable people, who are often considered the natural hosts and hostesses of the personality world. They do their best to create a warm and welcoming environment, even when it comes to meeting strangers.

ISTPs aren’t necessarily hospitable people, since they aren’t great at opening themselves up to strangers. ISTPs are capable of being friendly, but they often seem a bit more mysterious than they do friendly. They like to maintain a smaller circle of people who know and understand them on a deeper level. For the ISTP feeling forced to be welcoming and hospitable to new people, is something which is a bit draining.

ESTP
ESTPs try their best to be welcoming to new people, but they aren’t always hospitable. They enjoy having things a certain way and don’t necessarily like when new people come into their environment. ESTPs are certainly capable of being friendly and they do like meeting new people, but it depends just how invasive those people are into the ESTPs lives. When they have people in their home who they don’t know well, it can make them a bit uncomfortable.

ISFPs try their best to be hospitable, and they are often friendly people. They enjoy making new friends and can often be rather welcoming to new people in their lives. They don’t like being closed off from making friends and so they try to be hospitable and kind. For the ISFP it is more rewarding to get to know these people and make connections which could become something truly special.

ESFPs are often hospitable and welcoming people, even when it comes to strangers and new people. They want to be able to make connections and get to know new people they can interact with and possible making lasting friendships with. For the ESFP it is rewarding to make friends and be welcoming to strangers. ESFPs are naturally very hospitable people, who do their best to make others feel comfortable around them.