Here’s What Type of Vigilante You Would Be, Based on Your Personality Type 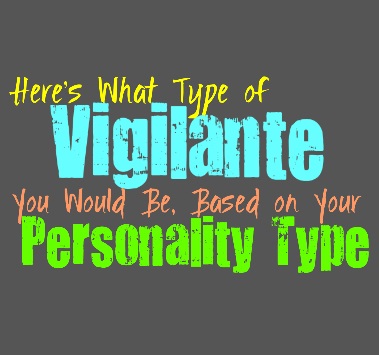 Here’s What Type of Vigilante You Would Be, Based on Your Personality Type

The idea of being a vigilante can be a bit appealing, but sometimes this is for different reasons. While some want to create a sense of justice, others simply think of it like an interesting way to take control. Here is what type of vigilante you would be, based on your personality type.

The INFJ vigilante is all about justice and finding a way to make things right in the world. They are more like the Robin Hood style vigilante, wanting to help the weak improve their lives. INFJs truly hate seeing injustices in the world and this is something that can often bother them on a deep level. They want to make a real difference and want to be able to help others as much as they can. This is what would turn the INFJ into a vigilante, seeking out justice and striving to make a real difference.

The ENFJ vigilante often wants to seek out justice where they continue to see the weak being stomped on. They want to make a difference for their loved ones and are more likely to seek out vigilante behavior if someone they care for is in need. The ENFJ does care deeply about others and wants to do whatever they can to help and make people happy. The ENFJ vigilante most likely has seen the people they love trampled on too much, and wants to seek out their own form of justice.

INFPs believe in justice, and can become truly upset when they see things going the wrong direction. When wrongdoers get away with their crimes and constantly harm others, it hurts the INFP personally. Injustice is one of the worst things to the INFP, and they simply want to see the right moral choices being made. This is the type of thing that might drive the INFP into becoming a vigilante, even if it isn’t necessarily easy for them to go around the law. The INFP vigilante simply wants to make the world a better place, and wants to stomp out injustice.

The ENFP vigilante is often very similar to Robin Hood, deciding to go against the rules of society. ENFPs can certainly follow rules that seem right and true, but have a hard time with things that simply are unjust. The ENFP vigilante is simply striving to make a difference in the world and isn’t afraid of going against what others tell them they should do. They will fight for what is right and will break whatever rules they see fit along the way. It comes from a place of caring, and simply wanting to make a difference in the world.

In fiction stories the INTJ is often pegged as the villain, but this is an unfair characterization. This is simply from a lack of creativity, since the INTJ often does want to make a difference. They do despise injustice and believe that being educated and aware is the best way to actually enforce change. The INTJ as a vigilante is likely to be driven and focused on their task, with a sense of structure to everything they do. At the same time they work to make the truth known in a way that can actually change the world.

ENTJs as vigilantes are often focused and methodical, wanting to do everything right. ENTJs are driven people who go after their goals with a sense of direction and skill. When they decide to take something on they will do whatever they can to make it happen. If the ENTJ does come to the realization that they want to make a difference outside of following the law, they will definitely be formidable at this. As the vigilante the ENTJ is definitely just as focused as they are at anything else, wanting to do everything as efficiently as possible.

The INTP vigilante is often the type to take care of things in a more discreet manner. Whether they are hacking something or simply finding ways to make a difference, the INTP vigilante often uses their brain to do this. After developing the ability to create change, the INTP likely comes to realize that they should do everything in their power to act on it. The INTP vigilante often does this because they feel responsible to actually do what they can and use their abilities instead of simply sitting back.

ENTPs as vigilantes often become very formidable at what they do, since this type of behavior can be a bit fitting for them. They don’t often enjoy following rules, especially when they believe these rules or laws are simply wrong. They don’t allow much to stand in their way, and often dislike feeling held back. When the ENTP feels like there is something they want to do, they will do whatever it takes to make a difference. They might seem a bit reckless but their actions always have method and reason behind them.

ISTJs are rarely seen as vigilantes simply because they like to follow the rules. They aren’t likely to go against the laws already created, not in an illegal manner. While ISTJs are strong and capable of fighting the laws they disagree with, it feel unnatural for them to break those laws. The ISTJ vigilante is often a rare sight, simply because it goes against their morals in most situations. The ISTJ vigilante will occur when they have simply witness too many injustices and realize that no one is doing anything to make a difference.

ESTJs are often rule following people, so they don’t often like doing anything that goes against what is expected. They aren’t likely to break laws in any way, even if it means making a positive difference. Most ESTJs are against the idea of becoming a vigilante, but sometimes their desire to enlist change can overrule these feelings. It will likely cause an inner conflict for the ESTJ, and will cause them to choose their desire to help others over their desire to follow the laws.

ISFJs are often rule following people, but at the same time they are deeply connected to others. They are empathetic and naturally feel the pain of those around them, which causes the ISTJ to want to stop this. The ISFJ vigilante is often this way because they want to help the people around them, and feel like no one is doing anything to truly accomplish this. Instead of allowing others to continue to do wrong, the ISFJ vigilante will do whatever it takes to make things right.

For the ESFJ to become a vigilante it often comes from a desire to help others, and to stop the pain of their loved ones. They have likely witnessed someone they love hurt and feel powerless to stop it. The ESFJ vigilante strives to protect their loved ones, and they aren’t afraid to do whatever it takes to make this happen. They are mostly concerned with protecting their loved ones and want to do whatever they can to keep them safe and happy.

The ISTP vigilante simply isn’t afraid of breaking the rules, and follows their own set of morals. They do what they believe is the right thing, regardless of what others think. Their sense of independence causes them to focus on the present without really focusing on what other people expect of them. Without really caring for the rules of society, they focus on helping others and making a difference in the way they see fit.

ESTPs as vigilantes are often a bit chaotic, and unafraid to break the rules. They are both charming and reckless, doing whatever they can to follow their own morals. They might constantly do things that seem wrong to others, but deep down their goal is to help and change things for the better. Their actions aren’t always easy to understand, since they can do things that are a bit surprising and definitely rule breaking.

The ISFP vigilante often believes they have a higher calling to make a difference in the world. They aren’t afraid of breaking rules, simply because they want to help others and do what they believe is right. They are deeply moral people, who feel like it is their responsibility to create change in the world and help those around them. While they don’t really like having to go against the laws and rules of society, they do it because they know it is right.

ESFPs as vigilantes are often a bit reckless, and completely unafraid of breaking the rules. They simply want to make a difference and don’t really care what the cost might be. They will go out of their way to create change and do whatever it takes to help others out of their weakened situation. The ESFP vigilante doesn’t have much respect for rules, and believes that it is more important to help others and make a real difference.