Do You Like to Shock People, Based on Your Personality Type 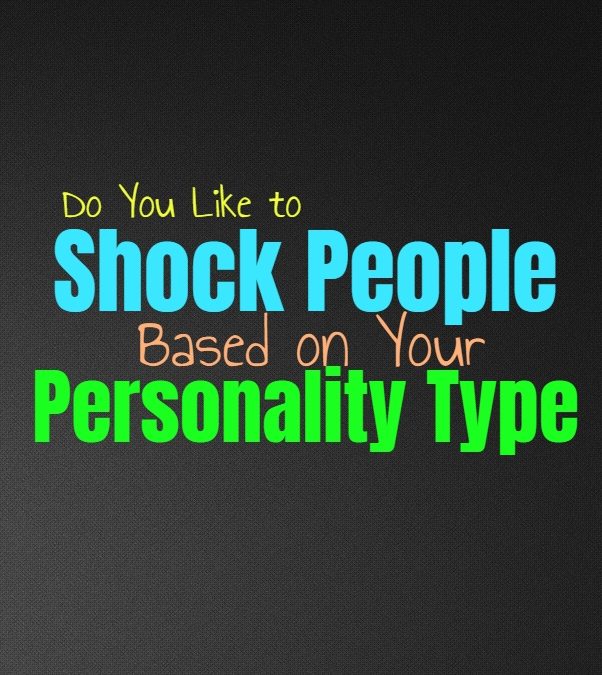 Do You Like to Shock People, Based on Your Personality Type

Some people naturally enjoy shocking others, and get a bit of joy out of it. For others it is best to be someone who flies under the radar and isn’t seen as shocking or over the top. Here is how much you like to shock or surprise people, based on your personality type.

INFJs don’t really like to be shocking intentionally, since it seems a bit too conspicuous for them.

Most of the time INFJs actually prefer to be on their own and don’t like getting in other people’s faces with their behavior. INFJs don’t usually try to be intentionally shocking with most people, unless they are searching to get someone’s attention.INFJs would rather be a little more discreet since they aren’t naturally comfortable opening themselves up to others.

ENFJs don’t like being shocking intentionally, at least not most of the time. They prefer to be someone who others can look up to and admire, especially their loved ones. ENFJs do have times when they like to be a bit over the top for the sake of gaining attention from certain people, but they don’t like to be overly shocking if it is going to be upsetting. ENFJs only want to shock people in a positive way, by showing that they are impressive and even a bit daring.

INFPs do sometimes enjoy shocking people, mostly because they are used to being different. INFPs don’t mind being a bit shocking, especially if it happens naturally because they are expressing their feelings and being true to themselves. INFPs will stand up for their beliefs even if it can seem shocking or over the top to others, as long as they know it is the right thing to do. Sometimes shocking people can be entertaining for the INFP, especially people they feel need to be shaken up a bit.

ENFPs do sometimes like shocking people, since it can be entertaining for them. They might enjoy seeing just how much they can shake people up and get a rise out of them. ENFPs become bored easily and so there are times when they just want to find ways to entertain themselves, and this can include shocking others. ENFPs will usually do this in a jesting manner and will make it known that they were just kidding after a while, but at first being able to shock people can be fun for them.

INTJs don’t necessarily try to shock people, but it won’t bother them if they do. They simply go about doing things in an independent and focused manner, and if this shocks people then so be it. For the INTJ it is more important to learn and continue to remove ignorance by any means possible, so sometimes this does mean intentionally finding ways to shock people so that they will pay attention to what is being said and expressed by the INTJ.

ENTJs don’t really care if they shock people, especially if they need to make a point. They do their best to focus on what needs to be done and if their actions or words are shocking, then so be it. For the ENTJ it is important to be efficient in everything they do, sometimes their aggressive nature can be a little bit shocking to people who aren’t used to it. Most of the time ENTJs don’t mind being shocking, especially when it comes to their sense of humor.

INTPs don’t mind being a bit shocking, especially if they can gauge the reaction it causes. Most of the time they simply focus on doing their own thing and learning what they can from their surroundings. INTPs don’t mind keeping to themselves often, but that doesn’t mean they dislike connecting with people. They do have times when their behavior or words can be a bit shocking to people, and they really don’t do this intentionally most of the time.

ENTPs do sometimes find themselves intentionally seeking out ways to shock people, since they enjoy seeing their reactions. For the most part ENTPs do these things to learn and understand a situation better. When they intentionally shock people they often want to see how they will respond and figure out what makes them tick. ENTPs push buttons in order to learn about themselves and those around them.

ISTJs don’t like to shock people, they prefer to fly under the radar most of the time. They don’t mind being someone who shocks others in a positive way, by being impressive and capable people. They prefer to be someone who works hard and always accomplishes their goals in life. For ISTJs sometimes it is best to be someone who is more subtle and doesn’t constantly shock or surprise those around them.

ESFJs don’t usually intend to shock people, especially not in a negative manner. They don’t seek out attention this way, instead they want to be someone that others love and respect. For the ESFJ it is better to find ways of gaining people’s attention by impressing them and being someone that they look up to. They can actually become annoyed with people who do things intentionally to shock others, since they prefer something a bit more subtle and less dramatic.

ISTPs don’t really mind shocking people sometimes, especially if they are a bit bored. When they need to shake things up and seek out a different means of entertainment, they might do something a bit shocking. ISTPs just don’t like stagnancy or feeling stuck in the same mundane position. Instead they want to find ways to keep themselves moving forward and sometimes this means being a bit shocking intentionally.

ESTPs do sometimes enjoy shocking people, since they don’t mind this type of attention. ESTPs just don’t enjoy when things are stagnant or boring, instead they want to find a way to keep themselves entertained. Sometimes this means being shocking in order to shake things up and keep things moving in the right direction.

ISFPs don’t mind being shocking from time to time, especially when they want to shake things up a bit. ISFPs don’t like feeling a sense of stagnancy or boredom in their lives. Sometimes for the ISFP it is more rewarding to be shocking, since it can gain the attention they are looking for. It entirely depends on the situation and who they are seeking attention from, ISFPs just don’t like being predictable.

ESFPs do sometimes do things with the intention of shocking people, especially if they want to get their attention. ESFPs don’t like being ignored and so sometimes they seek out ways to gain attention by being a bit shocking. ESFPs also dislike feeling stagnant or bored and so sometimes this means they need to find ways to shake things up. ESFPs are good at being shocking when they need to be, and this doesn’t really bother them.