Do You Have a Tendency to Do Things In Order, Based on Your Personality Type 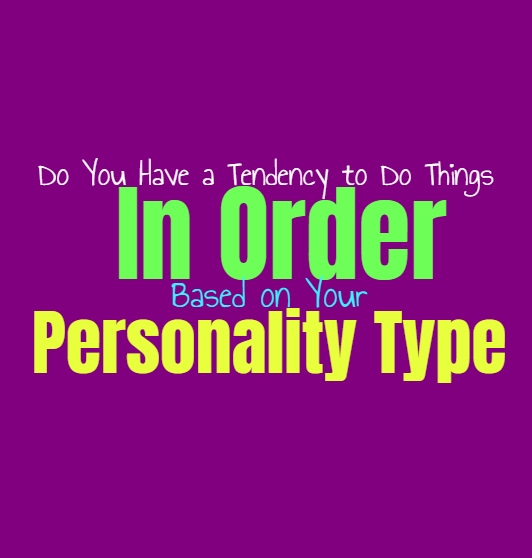 Do You Have a Tendency to Do Things In Order, Based on Your Personality Type

Some people believe it is important to follow a schedule and to do things in order. For others it isn’t natural to follow the rules and expectations of others, so they often find themselves jumping around and doing things in a bit more disorganized manner. Here is your tendency to do things in order, based on your personality type.

INFJs do try to do most things in order, especially when they feel it is important. They don’t like bouncing around too much since it can be confusing for them. INFJs believe in keeping things a bit more organized so that they can follow the right path. Most of the time they do like having things done in order rather than bouncing around. When the INFJ sees people who are incapable of keeping some sort of order in their lives, it can be a bit unnerving for them.

ENFJs don’t generally do things out of order, since they like to keep things a bit more organized. For the ENFJ it can be unnerving when people want to bounce around too much, since it lacks a sense of control. ENFJs want to have more control in their lives, especially with the things they believe are truly important. When it comes to doing things in a particular order, ENFJs try their best to keep a schedule and focus on this order.

INFPs don’t really need to do everything in order, since they aren’t naturally rule followers. For the INFP it is more enjoyable to do things on their own terms, and sometimes that means being a bit all over the place. They don’t feel like it is necessary to follow some sort of particular order or instructions. INFPs follow what makes sense for them and what feels right, and sometimes that means going out of order with their actions.

ENFPs don’t usually feel a strong need to do things in any particular order, instead they like following their own schedule. For the ENFP it is important to follow what feels right for them, and sometimes that means going out of order with things. They aren’t fans of having to follow some sort of strict set of rules, and so going in order does not always make sense for them. ENFPs are capable of going in order when it seems like the right choice, but they do what feels right for them.

INTJs do believe in following order in their lives, since it helps them maintain a sense of control. Constantly going out of the natural order of things can cause a sense of discord and make it challenging for them to keep things organized properly. INTJs don’t necessarily feel like they need to follow things in order in a strict manner, especially not if going out of this order is the more efficient choice to make. For the INTJ it is about making the smart choice and doing things the most efficient way possible.

ENTJs definitely believe in doing things in order, especially when it is the right and smart thing to do. ENTJs want to make smart choices and they do realize that organization helps them achieve their goals and maintain control in their lives. ENTJs can become annoyed with people who constantly do things out of order, since they are often seen as messy and disorganized. ENTJs don’t break rules unless they can see that it is the smartest choice to make, since most of the time they prefer to follow a schedule and sense of order.

INTPs don’t really feel the need to do everything in order, since they can prefer to bounce around sometimes. INTPs would rather do things on their own terms and sometimes that means doing things out of order. They don’t like following some strict schedule or set of rules, for them this feels a bit too controlled. INTPs want to follow their own path and sometimes this means doing things out of order and going against the expectations of others.

ENTPs really don’t like feeling obligated to do things in some particular order. Instead ENTPs prefer to follow their own path and sometimes this means bouncing around a bit. They aren’t fans of constantly keeping things structured and in order, since sometimes they feel more inspired going off in a different direction. For the ENTP bouncing around and going out of order can sometimes help them uncover more useful information.

ISTJs do believe in following a sense of order in their actions, and so they don’t like to break away from this. They don’t really enjoy doing things out of order, since this can create chaos and disorganization. ISTJs believe in following a sense of structure, and they want to be able to keep a schedule with things. When things become out of order it can lack control and ISTJs want to maintain a sense of control over their lives and actions.

ESTJs do believe in doing things in order, since they really aren’t fans of breaking out of a specific schedule. For the ESTJ breaking away from the order of things means a lack of organization and this can create chaos. They want to create control in their lives, and so doing things in order can help with this. When people break from the order of things ESTJs can become annoyed by this since it lacks control and efficiency.

ISFJs don’t really like doing things out of order and instead prefer to keep with some sort of schedule. For them it feels inefficient and out of control to do things out of the proper order. For ISFJs keeping with organization and order is truly important, and they believe in doing whatever they can to maintain a sense of control in their lives. When people do things out of order it doesn’t make much sense for the ISFJ, and to them this seems far too chaotic.

ESFJs do prefer to do most things in order, since it helps them keep a sense of organization and structure. They don’t like bouncing around since this can cause confusion and prevent them from focusing on the things which are important to them. For the ESFJ doing things out of order can prevent them from keeping control in their lives and getting things done the way they want or need to.

ISTPs don’t believe that everything needs to be done in order, especially when they want to mix it up a bit. For them feeling obligated to follow instructions and do things in a particular order can be truly draining. They want to be able to follow their own path and sense of direction and sometimes this really does mean doing things out of order.

ESTPs don’t really need to do everything in order, since they believe in following their own path. Sometimes they enjoy bouncing around a bit and this means doing things completely out of order. Sometimes ESTPs enjoy breaking rules simply for the sake of doing what feels right and exciting for them, rather than following the expectations of others.

ISFPs don’t really feel the need to do things in order, sometimes they break with conventions intentionally sometimes it is simply about following their own path. ISFPs do what feels right for them in the moment and that doesn’t always mean going with a specific schedule. For ISFPs going out of order isn’t always a bad thing, sometimes it just means doing what inspires them.

ESFPs believe in following their own path and sometimes that means going against convention and doing things a bit out of order. ESFPs don’t like simply going with convention and what other people expect from them, and so sometimes they find themselves bouncing around. For the ESFP sometimes going out of order is necessarily, since they follow what feels right in that moment.