Here’s How Politically Correct You Are, Based on Your Personality Type 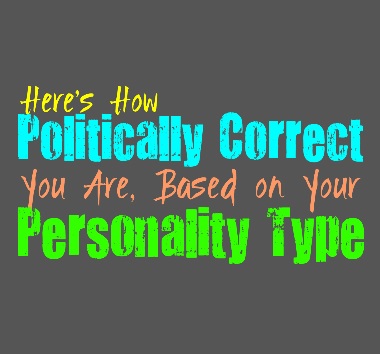 Here’s How Politically Correct You Are, Based on Your Personality Type

Some people are naturally in tune with the feelings of others, and often prefer to be a bit more politically correct with their phrasing. Some people realize that certain statements can be easily offensive to others, and they will want to avoid saying anything that can be hurtful. Here’s is how politically correct you are most likely to be, based on your personality type.

INFJs might not be internally politically correct people, but they can behave this way in order to avoid upsetting anyone. INFJs know how to be respectful of others and their emotions, and they often want to avoid pushing the wrong buttons. While INFJs might not need people to constantly be politically correct around them, they try to adapt to situations themselves. When they are around people who might be more sensitive, they can adjust in order to protect them and their feelings.

ENFJs can definitely be politically correct when they need to be, especially if they are in an environment that requires it. ENFJs are good at adapting to their situations, and will definitely adjust when someone is feeling sensitive. They care about others and realize that some people can be a bit more emotional and need their feelings to be considered. While ENFJs might not require that people be politically correct around them, they still believe in considering who they are around and what their needs are.

INFPs can definitely be politically correct in some ways, especially since they prefer to be sensitive to the needs of others. INFPs speak from their heart, but they don’t want to do anything that will be hurtful to others. They can often find ways to express themselves without stepping on anyone’s toes, and will do their best to be politically correct. There are times when their feelings and desire to stand up for their beliefs can be a little less than politically correct, but this is something they certainly try to avoid.

INTJs do try to be politically correct in situations where it can help them convey their point. They simply prefer to be direct and accurate, which can sometimes cause them to be tactless. They don’t really like having to focus on saying things a certain way, instead they focus on being honest and precise. For INTJs it is important to get things done and to spread the truth where they can. If they have to constantly obsess over saying things the right way, it can leave them feeling a bit annoyed.

ENTJs are capable of being politically correct in certain situations, especially if it can help them get their point out there properly. They will be politically correct around a certain group of people, especially if they are trying to impress or connect with them. In most situations though ENTJs can struggle when it comes to saying the right words and being sensitive to the emotions of others, simply because they prefer to be factual. They want to be honest and direct and believe it is more important to be accurate than to be sensitive.

ENTPs aren’t usually politically correct people, simply because they are more interested in being accurate. They often have a hard time holding back in order to protect someone else’s feelings, even though they don’t intend to upset them. ENTPs would simply rather focus on spreading the truth, and constantly want to be learning new things. While they really don’t intend to be tactless, ENTPs simply don’t like having to restrain themselves.

ESTJs aren’t usually politically correct people, since they prefer to be accurate and efficient. They value getting things done and don’t like having to focus on being sensitive to the feelings of others. They want to get things done and work hard to be as upfront and direct as possible. Because of this ESTJs can sometimes lack a sense of political correctness, and can even appear a bit tactless to some people around them.

ISFJs are often capable of being politically correct, mostly to avoid upsetting anyone. They can read their environment most of the time and know how they should behave in order to keep the peace. ISFJs value a sense of harmony in their environment, and so they will be very politically correct if they need to. They don’t want to hurt anyone’s feelings and so ISFJs often adjust in order to avoid this.

ESFJs are capable of being politically correct and will often do this to avoid upsetting anyone. While sometimes holding back and be frustrating for them, they usually prefer to avoid drama and discord. They want to comfort others and don’t like saying anything that might hurt someone’s feelings. For ESFJs it is important to be sensitive to the needs of others and so sometimes they will adjust in order to comfort them.

ISTPs aren’t really politically correct people, instead they are more focused on facts. They would rather spread the truth than express things in a more sensitive manner for the sake of others. Even when ISTPs care about people, they still have a hard time being completely tactful. Even though they might be capable of being politically correct, it can seem a bit tiresome to them.

ESTPs are often capable of being politically correct, but there are times when they struggle with this. They are often more interested in being factual and sometimes this can cause them to be a bit tactless. They believe in spreading the truth, and will express the information as accurately as they possibly can. ESTPs are more likely to be politically correct about the things they are personally invested in, but can struggle with it on certain subjects.

ISFPs are sensitive and moral people, so they are definitely capable of being politically correct. When it comes to caring for others and being sensitive to their needs, ISFPs try to do their best. There are times when they are feeling in the moment and can express their emotions in a way that is less than politically correct. For the ISFP it entirely depends on the subject matter, and they do their best to be sensitive when they can.

ESFPs aren’t usually politically correct people, since they follow their own emotions and desires. When they are feeling in the moment they can sometimes lack a sense of political correctness, simply wanting to speak their mind and be sincere. While ESFPs do care about the feelings of others, it can be challenging for them to have to think things through before they speak out loud.