How You Feel Being Out of the Loop, Based on Your Personality Type 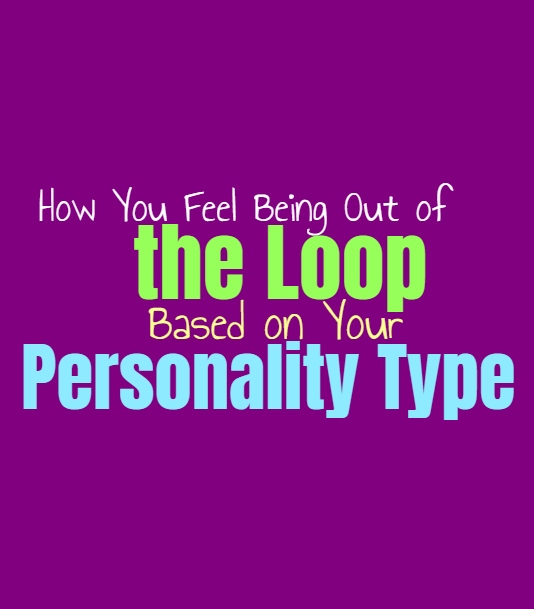 How You Feel Being Out of the Loop, Based on Your Personality Type

Some people really can’t handle the idea of being out of the loop, and the idea of it stresses them out. For others it really doesn’t feel vital to be in the loop or be involved in the information which doesn’t excite them all that much. Here is how you feel about being left out of the loop, based on your personality type.

INFJs don’t really like feeling out of the loop, and so there are times when they might want to find ways to learn the information they feel left out of. When everyone is talking about the same thing the INFJ might feel the need to learn about it so they don’t feel ignorant. For the INFJ it is more about not wanting to feel clueless about something while everyone else is let in on the secret. For the INFJ it is about feeling closed off from people or like they are being pushed aside for someone who is more aware and in the loop.

ENFJs just don’t like feeling left out or like they can’t interact with someone because they are not in the loop. ENFJs sometimes search out show or books just because everyone is interested in them, since they don’t want to be someone who doesn’t comprehend these conversations. They care about diving into the things their loved ones are into, since they really don’t want to be left out of the loop or feel like they don’t understand those around them. Being in the loop with things helps the ENFJ feel truly connected and not like they are being pushed out.

INFPs don’t really like being left out when it comes to their friends and inner circle. They don’t need to feel in the know with everything but when it comes to those who matter they want to be involved. INFPs just don’t want to feel pushed out or alienated, they want to feel like they are involved and connected. For the INFP it is important to have these connections and they don’t want to feel like there are these jokes or pieces of knowledge where they are left out of the loop.

ENFPs don’t really like being left out of the loop but they try not to obsess over this. There are times when they try to learn about things so they can feel included, but ENFPs do have a tendency to shift conversation and set trends themselves. They don’t want to concern themselves with things which don’t really inspire or excite them. When it comes to being out of the loop the ENFP just doesn’t want to feel intentionally pushed out or this becomes upsetting.

INTJs don’t like feeling out of the loop because they want to be knowledgeable in most things. When it comes to things which seem unimportant or a bit shallow then they are likely to ignore this. They do however want to be “in the loop” in the sense that they know what people are talking about and don’t seem ignorant by any means. For the INTJ being someone who knows things and is deemed as aware, is definitely something they strive for. Ignorance is something they truly dislike, and don’t want to have this in their lives.

ENTJs do like being in the loop, since they want to be knowledgeable of most things and enjoy being included. If some sort of important discussion is being had and they aren’t in the loop it can be rather frustrating for them. They want to feel involved and included in what is going on around them, even when it means having to keep up and learn about a new subject. ENTJs just want to be someone who is aware of their surrounding world and is capable of navigating anything they need to in order to accomplish their goals in life.

INTPs do want to be in the loop, simply because they don’t like feeling ignorant or left out. For the INTP being included in things and knowing what is going on around them is truly vital. They believe in always doing research and striving to learn about the world, even the things which might seem less important. If there is something going on which is widely popular, the INTP wants to at least know about it and be capable of keeping up.

ENTPs do want to be in the loop and become frustrated if they feel ignorant to something. For them being capable of being involved in the situation without feeling alienate is definitely something which matter to them. ENTPs will spend time learning about these new subjects, just to be capable of keeping up with the conversations at hand. Being out of the loop can make them feel like there is something they don’t know, and this is definitely frustrating for the ENTP.

ISTJs really don’t want to be left out of the loop with things which are important. While they don’t need to be in the middle of everything, they also don’t want to feel pushed out. When it comes to shallow matters like television shows or movies, they might not be that obsessed with being in the loop. Although if their loved ones and close friends are all involved in something they might show interest just for their sake. They do care about being a part of their community and sometimes this means taking an interest in topics they normally wouldn’t.

ESTJs don’t want to be out of the loop since they care about being a valued member of their community and family. For them it is important to be involved and not feel pushed out for some reason. They might show interest in certain things just so that they can avoid being out of the loop. For the ESTJ it isn’t about popularity, but rather feeling connected to these people and feeling like they are a real part of the group.

ISFJs don’t like being out of the loop with most things and so they try to ensure that this does not happen. If people are all discussing a certain topic the ISFJ wants to find a way to catch up so that they can be involved. They just don’t want to feel pushed out or like they are being alienated because they are unaware of something. When it comes to new shows or books or any sort of popular story, the ISFJ will try to keep up.

ESFJs don’t necessarily care about being in the loop with every little thing, just with the more important things. For the ESFJ it only becomes an issue if they start to feel alienated or like someone else is taking their place. When this happens they want to find a means of catching up and getting themselves back in the loop. They don’t need to be involved in everything but they do care about being included when it comes to the people they love.

ISTPs do like being in the loop with certain topics, but it has to be something which actually interests them. They can be rather private people and so they don’t need to feel involved in everything that goes on around them. For the ISTP it is more important to be aware of things which bring them a sense of purpose and value, rather than all of the more shallow subjects people tend to get involved in.

ESTPs don’t like being out of the loop and so they try to keep up with most things. If there is something currently popular then they want to find a way to catch up so that they can be involved in these discussions. Being out of the loop can actually be stressful and upsetting for the ESTP and they care deeply about being someone who is involved.

ISFPs don’t care about being in the loop unless this involved their friends and loved ones. The people they care for matter deeply to the ISFP and so they want to always feel included. If they have been alienated or left out of something it leaves them feeling deeply hurt and upset. ISFPs don’t need to be in the loop with everything, but they do when it comes to their inner circle.

ESFPs don’t like being out of the loop and so they try to stay current with everything. If people are discussing something they don’t know much about, then they likely want to find time to learn about it. They want to feel involved in things and really dislike feeling as if they have been pushed out or left out of the loop, especially when it comes to their loved ones.