Here’s How Much of a Hoarder You Can Be, Based on Your Personality Type 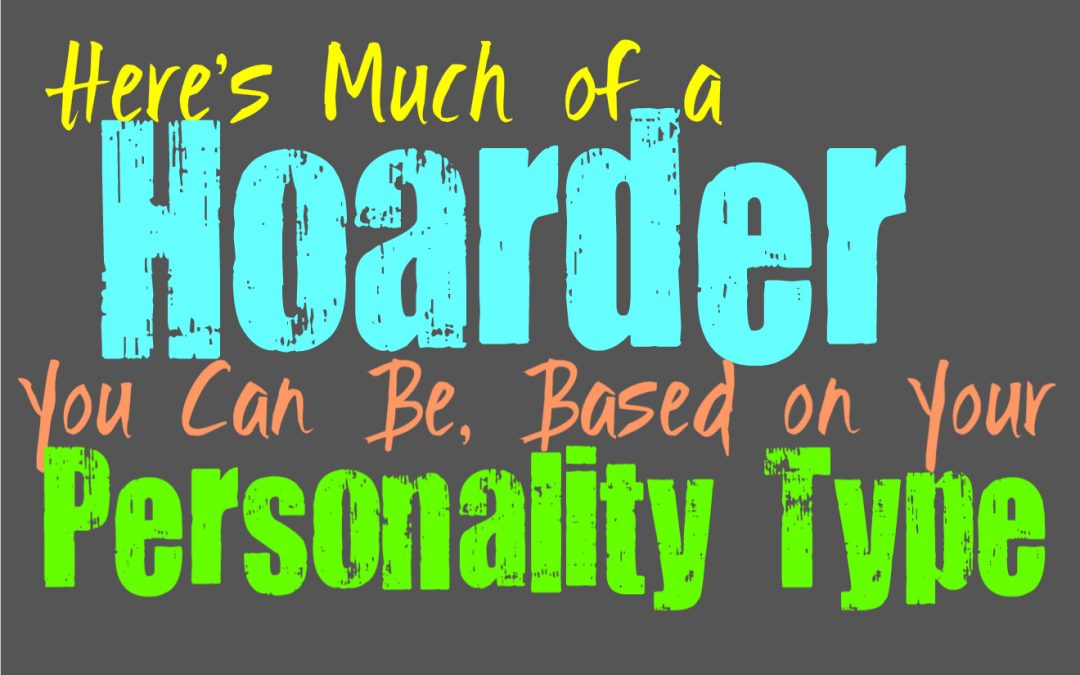 Here’s How Much of a Hoarder You Can Be, Based on Your Personality Type

INFJs can definitely be drawn to collecting and keeping more items than they have space for. This simply happens because they become attached to certain items that they feel comforted by. They might even be the type to surround themselves with things that make them happy when they are feeling a bit overwhelmed. INFJs are not materialistic people, but they enjoy certain things that bring positive emotions and memories into their hearts. For INFJs it can be easy to not fully recognize the potential clutter in their environment, which makes them slightly more capable of hoarding.

ENFJs can sometimes have a hard time getting rid of things, so they can be drawn to hoarding tendencies. They want to keep their environment clean for their loved ones, but their personal space can become slightly cluttered. ENFJs simply have a hard time getting rid of things that they might be able to use, or possibly give to someone else. They don’t want to get rid of an item and regret it later on, and can even be prone to collecting things in abundance.

INFPs can definitely be prone to hoarding tendencies, since they really aren’t that connected to their physical surroundings. They don’t always recognize when their collections or items have become a bit overwhelming in their environment. INFPs also can have certain memories tied to items, and it makes it hard for them to get rid of them. While they aren’t materialistic people, the things they own can often remind them of something special or inspire an emotion that truly goes deep.

ENFPs can definitely struggle to get rid of things that hold a deeper meaning to them, so they might have some hoarding tendencies. They often enjoy collecting and might find themselves interested in many different types of collectible items. ENFPs simply enjoy experiencing new things and can become excited when they can discover items that are valuable or interesting. They also can find themselves having a hard time getting rid of something that hold a special memories or feeling.

INTJs don’t like when things are overly messy, but they don’t mind what seems to be a little clutter. They can sometimes maintain a bit of organized chaos, and will know exactly where everything is in their workspace. INTJs do believe in keeping their entertaining areas very clean and simple though, although they aren’t often fans of constant entertaining. INTJs can sometimes hoard things like books and items that are important or valuable. They might even enjoy collecting, but they like to display things in a way that people can actually enjoy rather than just have things laying around.

ENTJs aren’t usually the types to enjoy having too much clutter in their environment. They prefer to keep their entertaining space clean and nice looking, and dislike when people can’t seem to keep things clean. ENTJs might have a small amount of organized chaos in their workspace, simply because this helps them maintain a steady flow. While they aren’t always strict about how they organize things, ENTJs aren’t often fans of hoarding. They aren’t afraid of letting go of things that aren’t necessary to keep around.

INTPs can definitely be hoarders, since they find it difficult to get rid of many items. There are some things that might remind them of the past, and when they are positive memories the INTP wants to preserve this. Many times though the INTP finds themselves holding onto piles of items because they intuitively believe that they will become valuable or rare someday. They often find themselves jumping from one hobby or idea to the next, which can cause them to build up a lot of different items in their environment. INTPs are also book hoarders most of the time, piling up many new books all of which they have started reading but have a hard time finishing.

ENTPs can sometimes hoard items, but they are often good at maintaining clear space for guests or themselves. They simply enjoy being able to store things that they find interesting, or that might become valuable one day. ENTPs like exploring new hobbies and ideas, so this can cause them to acquire many different items that they really don’t want to get rid of. ENTPs simply don’t become hung up on keeping everything perfectly organized, so they don’t really mind a small amount of clutter.

ISTJs really don’t like hoarding items, and prefer to keep things clean and organized. They don’t want constant clutter to get in the way of things, and want to be sure to keep everything in order. ISTJs often find it obnoxious walking into an environment that is messy or overly cluttered with unnecessary items. They can struggle to get rid of things that are sentimental to them in some ways, but they know how to overcome this and keep everything from getting out of hand.

ESTJs aren’t really fans of clutter and prefer to keep things organized. They can become sentimental about certain items, but only like to keep ones that bring positive reactions. ESTJs don’t want to create clutter though, and aren’t afraid of getting rid of things that aren’t necessary to keep. They become uncomfortable with too much mess or clutter and often feel like it stands in the way of getting things done the way they want to.

ISFJs can become sentimental with certain items, making it hard to get rid of them. At the same time they dislike mess in their environment, so they will find a way to keep things organized. If the ISFJ does start to obtain too many items, they will find a way to store them so it doesn’t become overwhelming. They don’t believe in letting their environment become messy, and want to be sure to keep things nice and presentable.

ESFJs don’t like mess, especially when they have to entertain others. They like to keep things clean and organized as much as they possibly can. While they do like to make sure that their environment looks nice, ESFJs do have a hard time getting rid of certain things. They can become sentimental about certain items, especially ones that bring back important memories. They might have a hard time getting rid of these things and will often have to find places to store them. This can cause the ESFJ to seem a bit like a hoarder, but they are often good at keeping this from others.

ISTPs often live in the present, but there are times when they can become a bit of a hoarder. They simply don’t always take the time to organized and clear out older things that they don’t need anymore. ISTPs become easily distracted by something that seems much more interesting, and so the clutter becomes put off for a while. They might go through stages of being a bit cluttered, to suddenly going in and just hauling everything out.

ESTPs can often obtain a lot of items, and have a hard time getting rid of them. This can be because the ESTP is struggling to take the time to go through their items to figure out which ones they no longer need. They often go on shopping binges when they are feeling a bit sad or even just bored, which can cause them to build up a lot of different items. ESTPs simply live so much in the present that they don’t always consider the need to organized and take time to declutter.

ISFPs do become attached to some items, and will keep something that hold a memory for them. They don’t like hoarding things that seem useless, but it can be surprising what the ISFP might value. They often have an emotional connection to gifts they have been given, since it feels like a physical representation of that persons feelings towards them. For the ISFP something that is beautiful and holds a meaningful memory, is something they don’t want to rid themselves of.

ESFPs can have some hoarding tendencies, since they can become emotionally attached to physical items. If something holds a memory for them, it is hard for the ESFP to let go of this. They enjoy holding onto positive memories, and most items often have some sort of emotion attached to them for the ESFP. They don’t like getting rid of things and often have a hard time letting go when something hold a personal value to them.