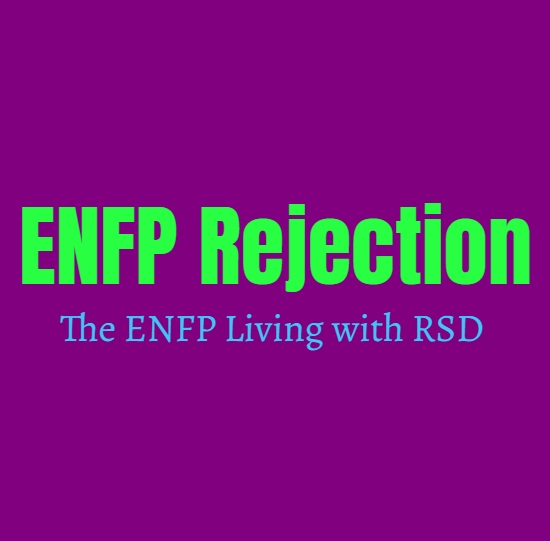 ENFPs can certainly struggle with feelings of rejection or criticism. They can be rather confident people on the outside and might want to always appear happy and positive around others. While ENFPs can seem like they are fine, internally they can struggle with feeling rejected especially by someone they care for. Rejection is hard for everyone but ENFPs feel things deeply and so dealing with this can be something which overwhelms them at times. For the ENFP who also deals with RSD, this can be something which they struggle to understand at first. It can weigh on their emotional state and cause them to feel like they are doing something wrong or like they are just too sensitive.

ENFPs can certainly struggle with rejection, even the more well-adjusted and matured ENFPs. For them it can be painful to feel like someone they love has rejected them or even criticized them about something important. ENFPs wear their hearts on their sleeve most of the time, and so when they feel this rejected they can struggle to really process it. They don’t want to feel like they are burdening others or like they are being too sensitive, and so they might act as if they are fine. In reality feeling that rejection can be something the ENFP internalizes and it can cause them to blame or question themselves. They might not have as hard a time when strangers reject them, but when it is someone they love and trust this can be difficult. ENFPs can struggle with feeling as if someone does not like or accept them for who they are and so this becomes something they might not find easy to get over. Even when the ENFP has learned to be more comfortable in who they are, this can still be something which stings a bit. They can improve how they communicate and express this rejection, which makes it easier for them to move on and even work things out with the person they feel the rejection from. ENFPs try their best to be someone who can keep moving forward, but they feel things deeply and so sometimes they have to process those emotions before they can really do this.

RSD is something that people with ADHD or ADD can suffer with, and can be a rather debilitating thing to deal with. For these people it becomes beyond painful when they experience a sense of rejection, and causes them to continuously obsess over it. They can perceive a rejection which hasn’t really occurred, feeling as if someone has slighted them when it was not their intentions at all. They can feel like they have been criticized by people they love rather easily, and this is really too much for them to handle in those moments. It is something which comes on in random situations, which makes it hard to really seek out ways of moving forward or avoiding these situations. For the ENFP dealing with RSD can really be something which leaves them feeling a bit hopeless at times. They already feel their emotions on such a deep level, and so having to deal with this added layer can be a real challenge. Feeling these perceived rejections and struggling to process or overcome them, makes it hard for the ENFP to want to be truly vulnerable with people. They are likely not going to express all of themselves to people, since they would rather put on an image which cannot be rejected in the same way. If they don’t expose their hearts to people they are less pained by feelings of rejection. ENFPs might put on this perfect image to those around them in hopes of avoiding this type of painful response to their criticism. They might feel like if they can portray themselves a certain way, they can put up walls which avoid being overwhelmed.

In some cases the ENFP can become reclusive and disinterested. They might not want to experience new things or try exposing themselves to situations which can cause them to feel rejected. This can be an even harder path for the ENFP to take, since it makes them feel unlike themselves completely. They need to be around people and need to be open to new experiences in order to really feel comfortable and confident in who they are. For the ENFP who processes RSD by distancing themselves from even trying, they can become rather depressed and emotionally exhausted.

For the ENFP who doesn’t handle rejection well, the best thing is to be open with their loved ones and themselves. The more they learn to become confident in who they are and their own choices, the easier it becomes to process criticism. When the ENFP is sure of themselves and has a firm grasp on their own inner morals, they become less conscious of outside criticism or rejection. Instead they know they are on the right path and can keep moving forward without allowing this to weigh them down.

For anyone dealing with RSD the situation isn’t just about seeking therapy or becoming comfortable with themselves. There are certain medications which might be necessary, especially for someone who seems to be really held back by this. It is always beneficial to seek help from a professional, especially with something like RSD.