Can You Take No for an Answer, Based on Your Personality Type 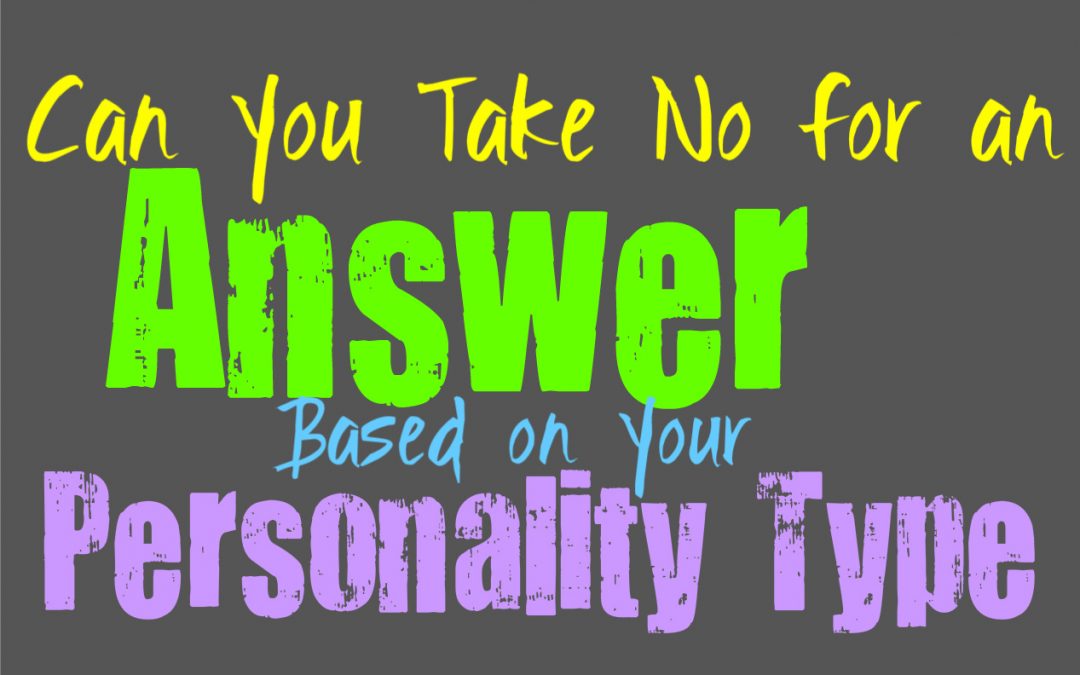 Can You Take No for an Answer, Based on Your Personality Type

Some people just don’t accept being rejected or turned down for things, and often take this as a challenge. They don’t really hear the word “no” and instead just push harder to get what they want. Here is how much you struggle to accept being declined for things, based on your personality type.

INFJs are capable of accepting no, simply because they respect the boundaries of others. For the INFJ it is important to respect other people and to not push them when they clearly don’t want to be pushed. When it comes to things they deeply want the INFJ will definitely be capable of pushing hard to get things done, but it depends entirely on the situation. They are often excellent at discerning whether or not they should accept when they are turned down for something, or when they should continue to push further.

ENFJs can sometimes struggle to accept no, since they believe in striving to always get things done with a sense of excellence. ENFJs don’t like being turned down when it comes to something they truly want to accomplish or acquire. They don’t like being held back in life and so sometimes they completely ignore when someone is trying to tell them to refrain from something. While ENFJs can hear a refusal when someone is clearly expressing boundaries, these are often the only situations when they are willing to accept it.

INFPs can sometimes struggle to accept hearing no, and might not entirely be able to move forward with this. When the INFP really sets their mind to something they don’t like being turned down or held back from it. They don’t always chase after certain dreams or goals, but when they do it is really difficult for them to accept being refused. When they deeply want something they will do whatever it takes to make it happen. They aren’t against pushing the limits in order to find a way to achieve the things they want or accomplish the goals that matter to them.

ENFPs really don’t take no for an answer, and will often push to get what they want no matter what. When someone turns the ENFP down they often take this as a challenge and will do their best to find a way around it. Sometimes this means they need to up their charm level a bit, in order to get their way. Other times they simply need to find a way to bend the rules a bit in order to make things happen. ENFPs just don’t like being told they cannot do something, and so they rarely just accept it.

INTJs actually don’t handle hearing no all that well, since they prefer to push harder to get what they want. If there is something the INTJ truly wants to accomplish or obtain, they will do whatever it takes to make this happen. They don’t allow other people to stand in their way and will simply find a way around this struggle. For the INTJ it just isn’t true to their personality to step down simply because someone tells them they cannot do something. They do respect personal boundaries though, and will know how to back off when someone needs their space.

ENTJs really don’t like being turned down or told they cannot do something, and so they rarely accept this. For the ENTJ hearing they cannot do something only makes them want to push harder to get it done. When they encounter challenges they often find a way to overcome them and improve their abilities in order to be efficient. ENTJs will accept the word no when it comes from someone who is simply expressing their personal boundaries, but they need to be sure this person sincerely means it. In many situations when the ENTJ wants something, they are going to find a way to get it.

INTPs can accept hearing no when it is something they believe they should back down from. They respect boundaries and don’t like pushing things when they clearly should not. INTPs are capable of overcoming certain challenges though, and sometimes they will just decide to find a way around their struggles. If they are being held back or turned down for something, they will simply assess the situation from a logical point of view. INTPs believe in approaching things from a rational and logical mindset, and so they use this to decide whether or not they should accept hearing no from someone.

ENTPs don’t often enjoy hearing the word no, and often will find a way around this. They don’t always push through aggressively, sometimes the ENTP will work to find a way to bend the rules a bit. They don’t like being held back from anything in life, and don’t really like just accepting this. For the ENTP it is important to go after what they want without having to respect what other people tell them they should be doing. For the ENTP it is best to follow what they believe in, and try to approach things from an analytical and logical point of view.

ISTJs don’t really like being turned down for the things that are important to them. When it is something they should take as a challenge and simply push themselves to improve, they won’t just accept hearing no. When someone is expressing clear personal boundaries the ISTJ will definitely be capable of respecting this. They don’t like pushing people when they should clearly give them space, but when it comes to situations where this isn’t about personal space the ISTJ will push harder to get what they want.

ESTJs don’t often accept the word no, and will usually take it as more of a challenge. When they are told they cannot do something they often want to work even harder to prove someone wrong. When the ESTJ sets their mind to something they don’t let anything stand in their way. They believe in working hard to accomplish their goals and striving to be as efficient as possible. For them it is important to never give up on their goals and dreams, and so they constantly strive to be the best at what they do.

ISFJs don’t like pushing boundaries when someone has made it clear that they don’t want something. For them it is important to be respectful and courteous of others feelings. ISFJs can definitely handle hearing no, especially when it is obvious they should back down. That doesn’t mean they will give up on things that are important to them, they simply strive to do what they believe is right. When the ISFJ should continue to fight for something then they certainly will do their best to follow through with this.

ESFJs don’t like pushing people past their limits, and will certainly accept the word no when it comes from someone setting personal boundaries. They do their best to be kind and respectful of others, since they care deeply for the feelings of those around them. While ESFJs do their best to be accepting of others boundaries, they can be different when someone is simply trying to hold them back. They don’t simply accepting no for an answer when they should clearly be pushing harder to get the result they need.

ISTPs don’t really like hearing no when there is something they deeply desire. They don’t often accept when someone tells them they cannot do something, and aren’t fans of following strict rules. When the ISTP wants something they will go out of their way to make this happen. They follow the moment and go after what feels most fulfilling for them, without allowing expectations or foolish rules to stand in their way.

ESTPs don’t really like hearing the word no when there is something they truly want. ESTPs go after the things they desire most and don’t like when something or someone stands in their way. They follow what feels right in the moment and will do whatever it takes to have things their way. ESTPs can sometimes struggle to accept when something isn’t quite going as they want, instead they continue to push for the results they desire most.

ISFPs can certainly struggle to hear the word no when there is something they truly want. ISFPs don’t like when someone tries to hold them back from following their hearts deepest desire. For the ISFP it is important to always follow their hearts and go after the things that will fulfill them the most. They don’t just accept hearing no from someone, and will do their best to make things happen.

ESFPs actually struggle to accept the word no most of the time, and will do whatever it takes to get what they want. When the ESFP sets their mind to something they don’t allow anything to stand in their way. They have a hard time really accepting when someone turns them down, instead they find a way around this. ESFPs can be rather charming people and will often enlist the help of their loved ones to obtain the things they truly desire.